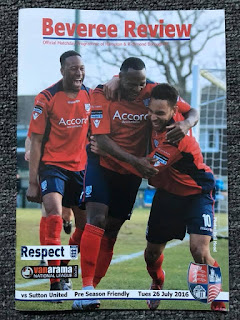 Today was going to be my first time watching Sutton United at The Beveree. I have never watched Sutton United play at The Beveree which made the match even more exciting for me. Now a lot of people are not very big fans of pre-season, but I am. I like watching Sutton during pre-season as it gives me the feeling of the brand new season coming and feeling a lot more closer and a lot more real. This post says this this is ground number 1 but the first ground I visited was Gander Green Lane (Sutton) but in my blog, the ground number will mean the number of grounds I have written about, for example if I go to a ground and it is ground 12 on the blog, the number will mean this is the 12th ground I have written about.

I have been to the Beveree a couple of times before so I knew what to expect, but this time it was going to be a whole new feeling because this time I was watching Sutton instead of a random team. Also the teams are local which kind of made it a local derby but it is only a pre-season friendly. The last time that I went to the Beveree was last season when I watched Hampton and Richmond beat Dulwich Hamlet 2-1. 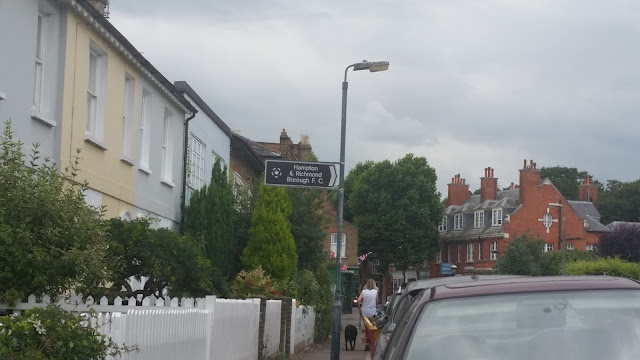 As the match was coming closer, I was slowly getting more excited. The plan was to maybe play some Football Manager in the day and get picked up by my dad at around 6pm and get to the ground for around 6:45pm. We eventually left my house in Colliers Wood at around 6pm and we got to the Beveree at around 6:40pm. The journey was very easy, there was hardly no traffic on the A3 but there were some small road works near the ground which did cause a bit of a traffic jam. The car park for the stadium is very small which means you either have to get the bus from Kingston (111) or walk to make the journey easier to avoid the trouble of parking. The ground is around a 10-15 minute walk from Hampton Court Station. As we parked the car, I looked at the ground. It always gives me a buzz because the ground is so much different to other grounds, it is right in the middle of a high street but when you get inside the stadium itself, it feels like you are in the countryside in counties like Wiltshire or Sussex. 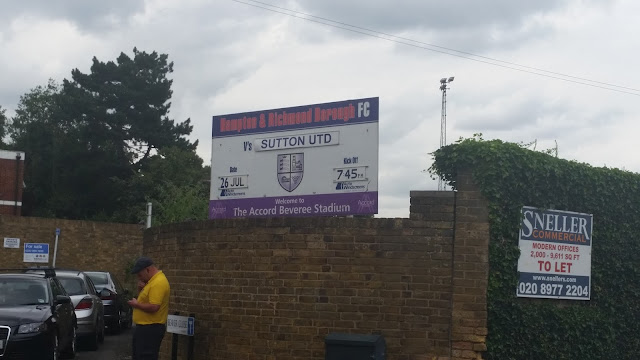 If you are going by car I would suggest that if the game is a 3pm kick off, you get to the ground for 2pm to avoid the trouble of finding a parking space. If the game is a 7:45pm kick off, I would suggest getting to the ground for around 7pm. Now there are many things to do before kick off on the day, you can go to Hampton Court Palace, do some shopping around the corner in Kingston or maybe go up the road to Heathrow Airport which is only a 30 minute drive away to do some plane spotting. I myself like plane spotting and many people think it is boring, but trust me it isn`t. 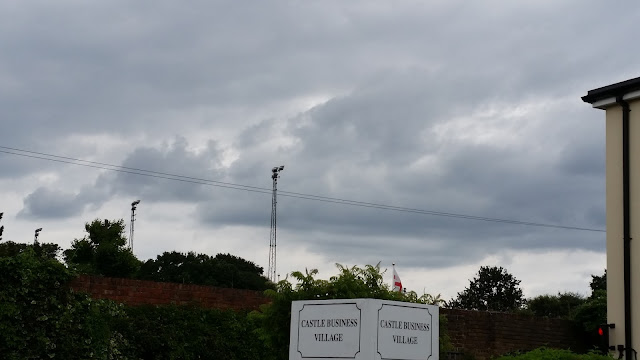 Once you enter the ground you get a buzz through your body. The ground is surrounded by trees which gives the feeling of watching football there a whole new atmosphere and feeling inside your body. The ground has a range of different stands and terraces. The main stand seats around 100-200 people, then next to that there is a nice terrace with some advertising above and says Hampton and Richmond Borough F.C. Then on the other side of the stand is a temporary small stand with around 100 seats that are green. Opposite this side of the ground there is an open area with a small covered terrace which no offense to any fans looks like a bus shelter. 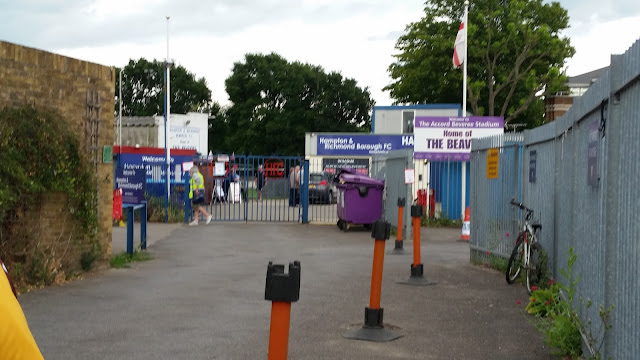 Behind one of the goals is a stand called the Alan Simpson stand which was opened in 1997 and holds around 40-50 seats in blue and red. The stand allows you to get a good view of the pitch but there is a high chance of you getting hit by a ball when the teams are warming up and kicking the ball which I have experienced many times before. Then on the other side of the pitch is a nice covered terrace that is around 2/3 of the pitch`s width. The Beveree is kind of weird as it is made from lots of different stands and terraces but feels really friendly and different to any other non-league stadium that I have been to before. 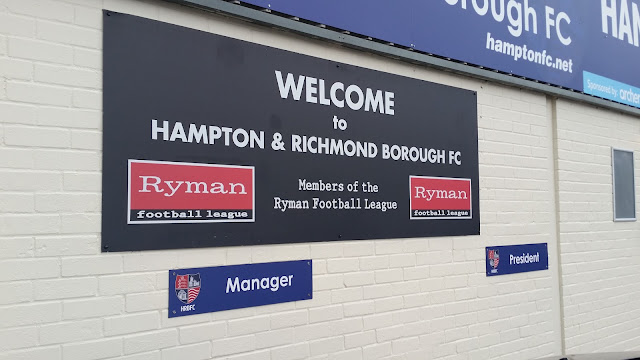 It cost my dad £7 and myself £1 to get into the ground. I did get a programme from a small stall outside the club shop for £2.50. The club shop has a good range of products and I was very impressed. The prices for the merchandise were reasonable which is very good for a non-league club. Once I had taken some pictures of the ground, we went in the bar which is called the `Hammonds Bar` and the Hampton fans were happy to have a chat with me and some other fans and the bar itself is very warm and has a friendly feeling to the place which made us as away fans feel welcome. The ground itself makes the feeling of watching football very positive, I mean even if you watched your team lose at the Beveree, the day out and experience of the day would make you happy. 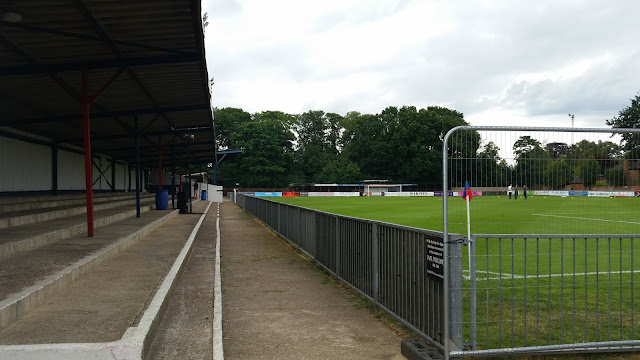 I also got a cheeseburger which tasted very nice and was very good quality. The prices of the food and drink were also very reasonable which is something that you sometimes do not see at many football grounds. From the start to the end of the game, the feeling of watching a game of football was so much different to an ordinary game of football, it just feels different. The Beveree is a special stadium in my opinion, it just feels weird the way the ground is set up but feels great in the same way. 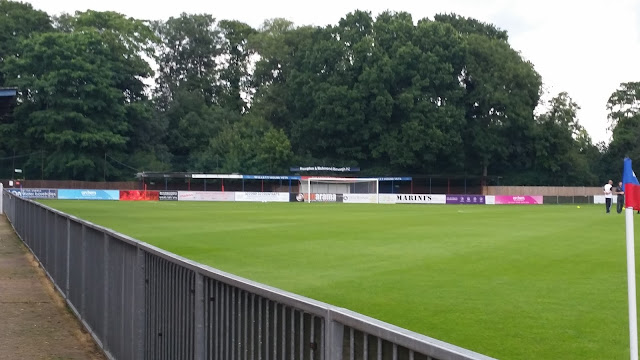 The first half was quite dominant from Sutton's point of view with us having the majority of chances but the action came up in the second half with Sutton opening up the scoring on 61 minutes via trainee Maxime Biamou. Hampton and Richmond then equalised just over 5 minutes later and then throughout the remainder of the second half, both teams had chances but with the last kcik of the game, Hampton scored and had beaten us. 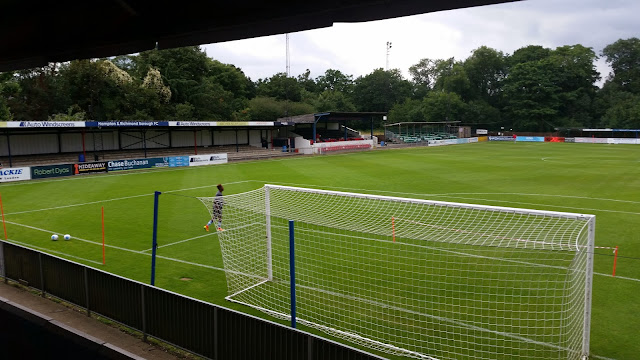 The game ended 2-1 to Hampton and Richmond and even though we lost, I had really enjoyed my night at The Beveree because the experience was great, the atmosphere of the game was decent and I was able to meet some new people and watch a decent game of football. I would defintely reccommend going to watch Hampton and Richmond Borough F.C. 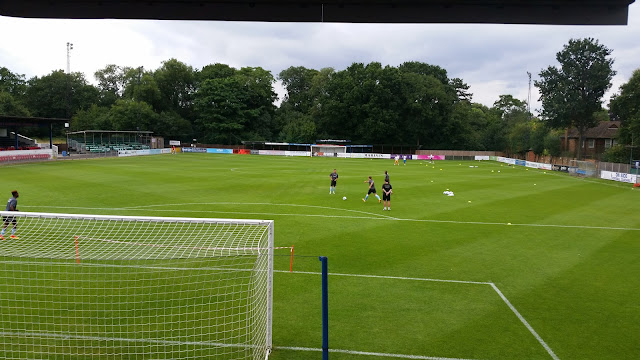 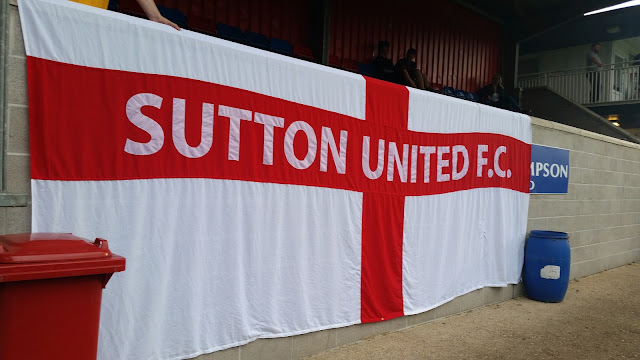 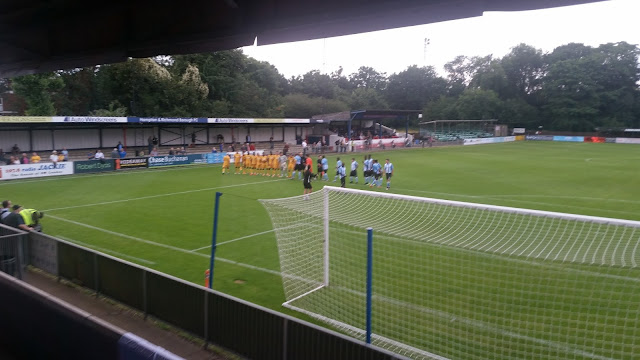 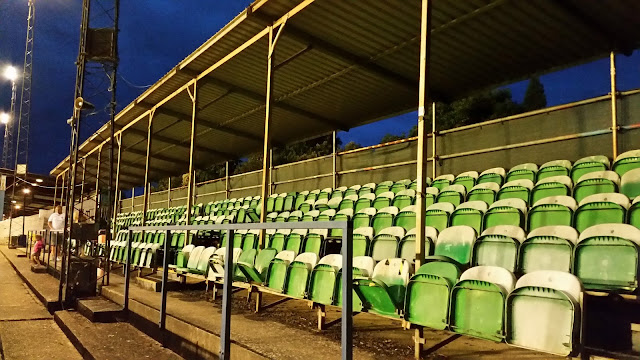 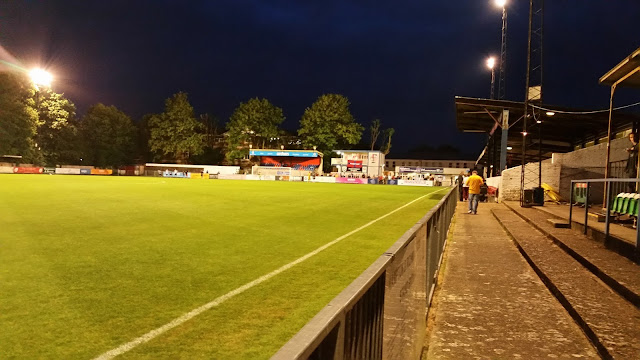