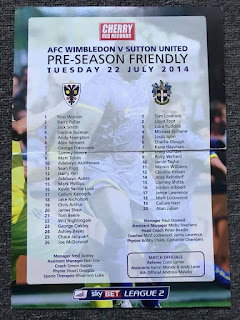 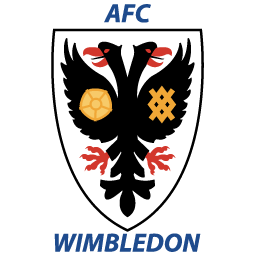 Sutton so far has had a quite good start to pre-season as they have won 2 and drawn 1 of their first 3 games. It is a good start to pre-season but in my opinion we could have played better in those 3 games. They beat Winchester City 5-1 and beat Reading XI 4-0 and they also drew 0-0 at home to Chelsea XI. I have been to Kingsmeadow before. The last time that I went to Kingsmeadow was when I watched Kingstonian lose to Maidstone United. 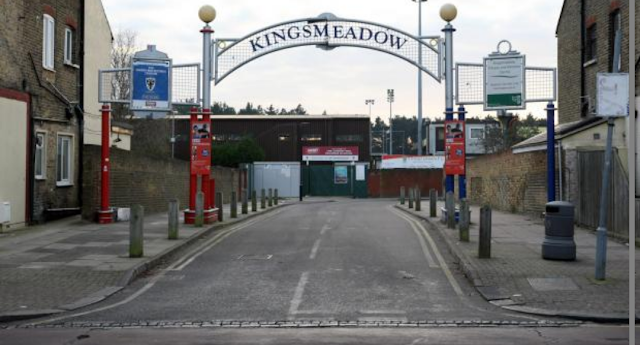 I woke up this morning feeling very tired as I had stayed up quite last last night and I did not get a lot of sleep and this put me in a bad mood. I went and had breakfast and I had a nice refreshing shower which put me in a much better mood. I then had to finish off some editing for my mates YouTube channel and this kept me busy until 1pm. I then played football manager for the rest of the afternoon and my dad came round to pick me up at 5:30pm. 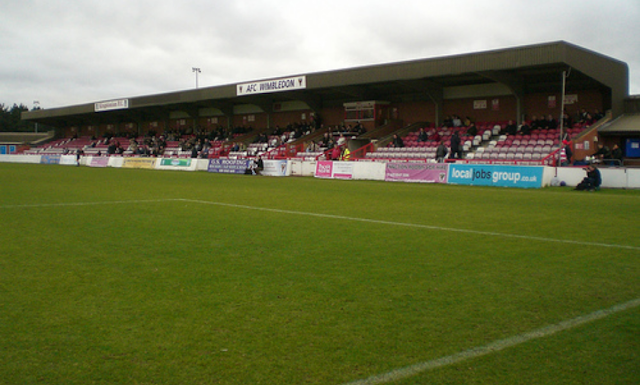 When my dad arrived, I started to get excited for the game because I had been busy all day and this meant I didn't really have any time to get excited for tonight but now I had the time to get excited for the game. We left my house at 6pm and the journey to Kingsmeadow was a doddle as we only had a quick 20 minute journey from Colliers Wood to the stadium, there was no traffic and it was easy to park outside the stadium. The stadium was pretty empty outside when we arrived but more people started to turn up just before the turnstiles opened. When I did arrive, Johnnie was already there so we both had a quick chat and took some pictures of Kingsmeadow and we walked round to the turnstiles and the were not open yet so I decided to look up the history of AFC Wimbledon. 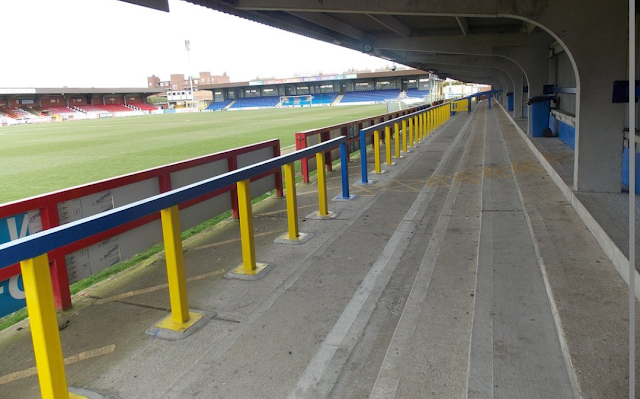 AFC Wimbledon were founded in 2002 as the original Wimbledon F.C. was moved to Milton Keynes which is now MK Dons. This is the only ever example of a football franchise in English football. The Wimbledon fans decided to start all over again and create a fan based run club called AFC Wimbledon. The club started out in the Combined Counties Premier and made it to the Football League in 9 years. AFC Wimbledon play at Kingsmeadow which was owned by Kingstonian F.C. but AFC Wimbledon purchased the stadium off the club and now Kingstonian ground share with AFC Wimbledon. Kingsmeadow has a capacity of 4,850 and has 2,265 seats and is the smallest ground by capacity in the football league. 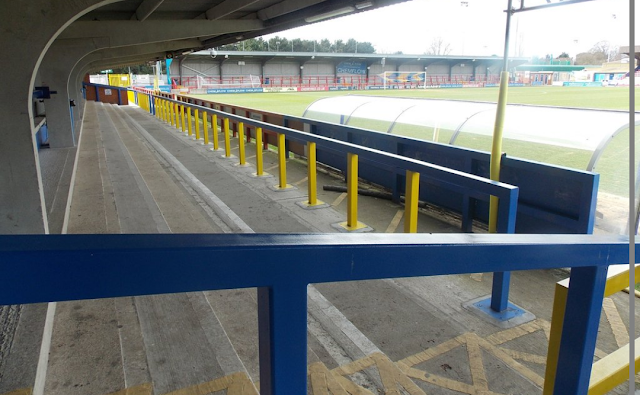 The turnstiles finally opened at 7pm and when we finally got inside the ground, I felt a buzz of energy enter my body as I see all 4 stands. Now the stands and terraces at Kingsmeadow are not the biggest in the world but it feels right for the size of AFC Wimbledon but I feel that Kingsmeadow does need larger terracing and stands. I love Kingsmeadow. I just love how it is made up of half seats and half terracing. The main stand at Kingsmeadow is called the Paul Strank Stand. It is a all seated stand with 1,265 seats in the colors of red, black and white. The stand holds the changing rooms, offices and bars. Opposite the Paul Strank Stand is the RyGas Stand. 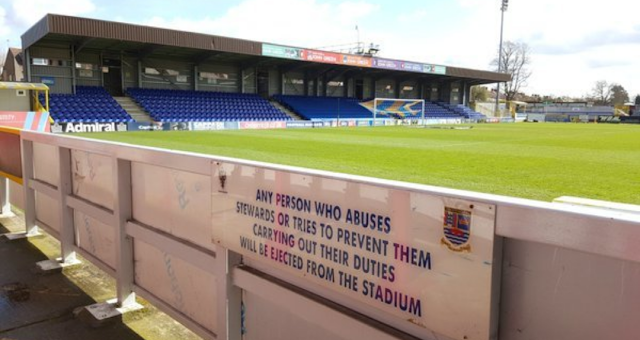 It is a small terrace which runs the length of the pitch. It hold the home fans and holds the away fans in one corner of the terrace for segregated games. Behind one goal is the Chemflow End which is a large terrace. It was originally uncovered but in the 2005-06 season, the club made the terrace covered. Then behind the other goal is the John Green Stand which is a all seated stand which holds 1,000 seats in the colour of blue and it is the newest part of the stadium and it really gives the stadium a football league feeling to stadium.

I went round the ground taking pictures and it seems like every time I go to Kingsmeadow, I seem to like it even more and this is one of the reasons why I like coming to Kingsmeadow. After taking some pictures of the ground, I realised that I didnt have a lot of battery on my phone and this meant I was only able to get a couple of photos from the actual game and I have had to use photos from other people but I asked permission first. It did annoy me that my phone had run out of battery but I had been so busy today, I had forgotten to charge it. 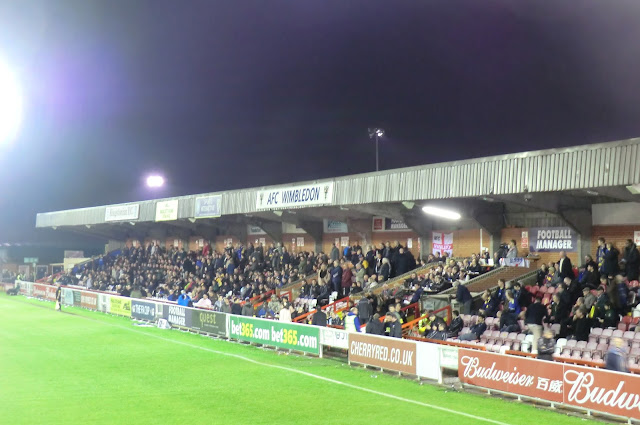 The game finally started and we were kicking towards the Chemflow End which is were a lot of Wimbledon supporters were standing so we decided to stand in the corner of the terrace as we didnt really want to stand near the Wimbledon fans. The game was actually exciting to watch, AFC Wimbledon and Sutton were creating some good chances. AFC Wimbledon took the lead then Sutton equalized. Sutton then were close to taking the lead but AFC Wimbledon took the chance and scored to make it 2-1. During the game, me, Johnnie and a few of his mates did the occasional chant to keep up our spirits and to show our support for our team. The game finished 2-1 to AFC Wimbledon and we clapped the teams off. We then walked back to the car and I got home at 10:10pm feeling exhausted. 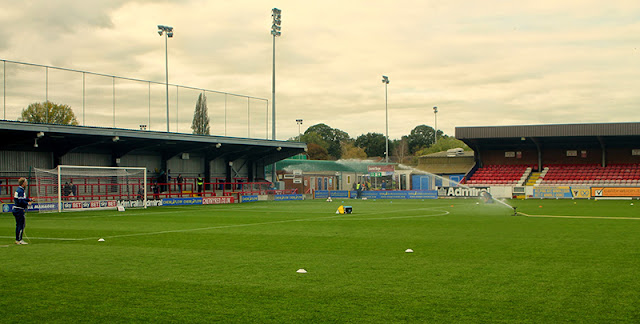 I did see some good football from Sutton tonight and I was able to meet up with my mates and have a good evening watching football and for any football fan, this would be a great evening and for me, this was a great evening. I really enjoyed tonight's game. I would definitely suggest going to Kingsmeadow if you like groundhopping as it makes a great day out and is a really nice stadium to go to. AFC Wimbledon is a really friendly club is a definitely a team that any football fan should go and see. I will say that AFC Wimbledon tickets are quite hard to buy for league games, so if you want to go and watch them, I would suggest going in pre-season. You may not get the same experience if you went in pre-season instead of a league game but it still makes a good day/evening out. 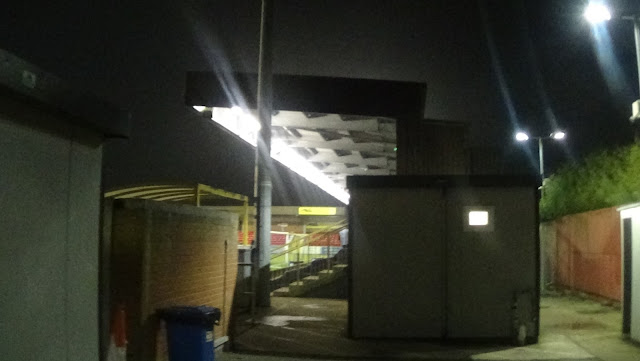 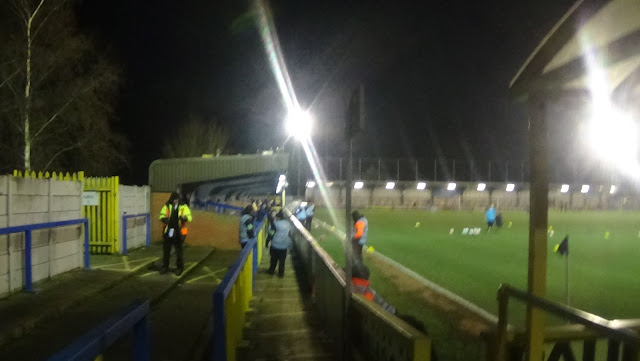 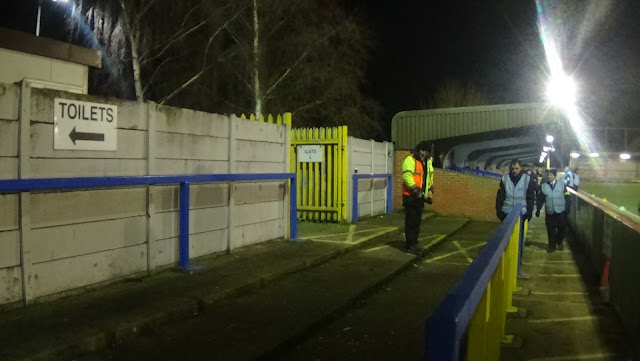 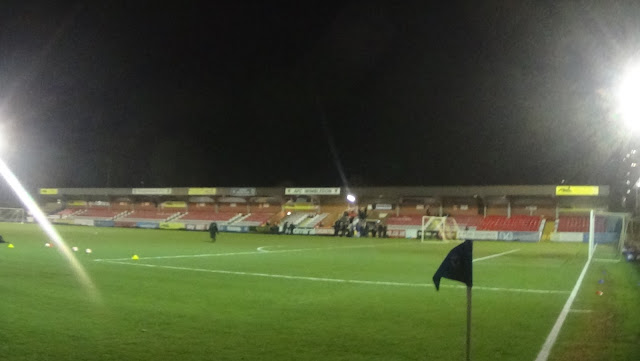 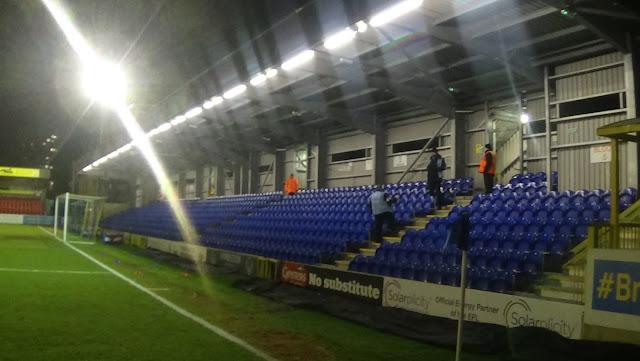 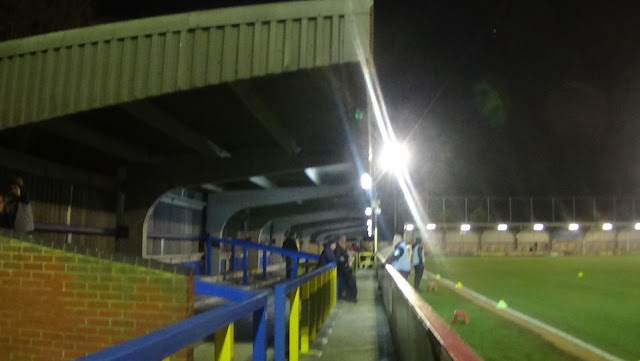 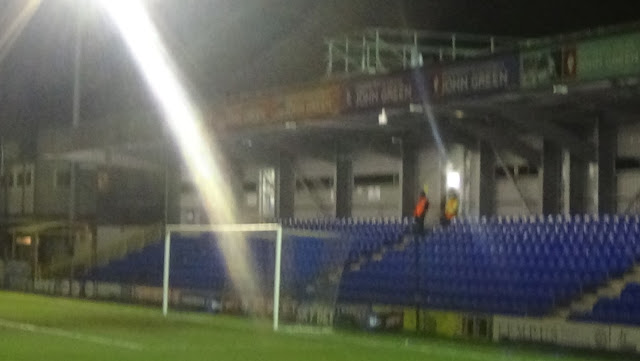