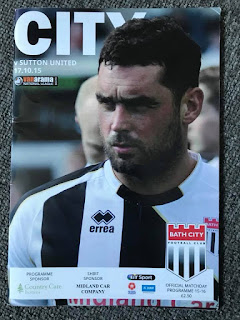 That time of the season has finally come, Bath City away. Bath away is one of my favourite away games that I have ever watched with Sutton. Bath is such a nice place to go and watch football, the area is lovely, the locals are really friendly and the stadium is located on a hill with unbelievable scenery surrounding the ground. The scenery that surrounds Twerton Park is like the hills and valleys that you see in the opening titles of Emmerdale. When you go to Bath it makes you want to live there.

I have been looking forward to this fixture since I last visited Bath which was Sutton`s last away game of last season. Ever since that game, I was really looking forward to coming back. Last season when I visited Bath, Sutton won 2-0 and it was boiling hot and even though today's game is in mid-October, the weather was looking promising. 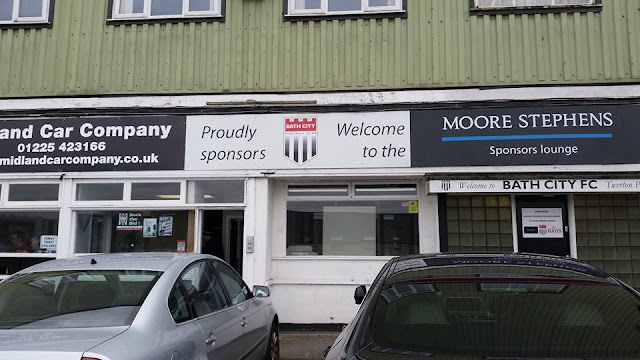 The plan for today was to go the same way that we went last season. We was going to catch the 8am train from Wimbledon to Woking. Then at Woking and get on another train which would take us to Salisbury. We would then arrive in Salisbury. Then we would have to wait for the final train to Bath Spa which we would finally arrive in Bath at around 11am. Then we would have a look around Bath before heading to the ground. 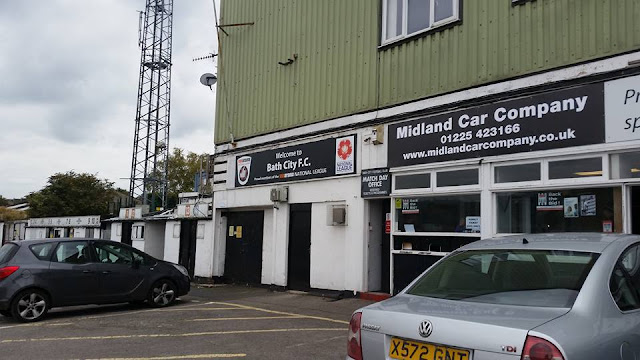 Bath City F.C. were founded in 1889 but back in 1889, the club was founded as Bath AFC. The clubs nickname is The Romans. They currently play at Twerton Park in the area of Twerton which is 15 minutes by bus from Bath Town Centre. Twerton Park has a capacity of 8,840 and has 1,006 seats. The club currently play in the Vanarama National League South. At some point in the clubs history, they played in the temporary Division Two and played teams like Liverpool, Manchester United and Everton. They have tried to join the football league many times but have failed. In the 2009-10 season they were promoted to the Conference Premier after beating Woking in the play-off final. 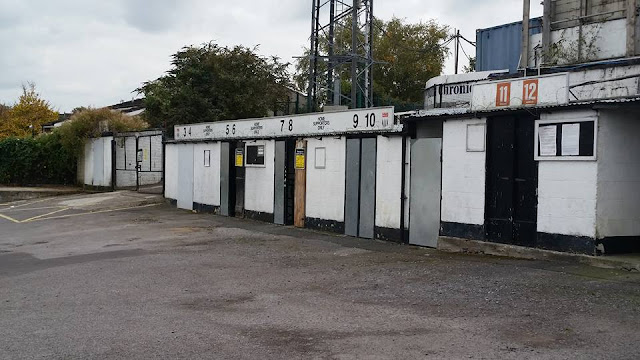 I woke up this morning at 6am feeling very tired because I had literally only 5 and a half hours sleep as I had to do some video editing for my friends YouTube channel. I got straight out of bed and had a quick bath and then had some breakfast. My dad arrived at my house at 6:40am and we made sure we had all my flags etc. before leaving at 6:50am. 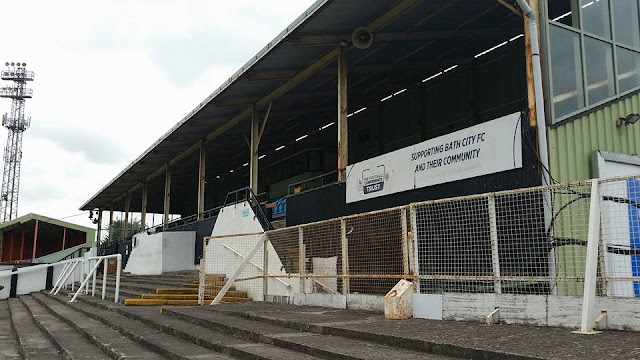 We then caught the 200 bus from just around the corner from my house and got to Wimbledon at 7:20am. We then went to the ticket machine and collected our reserved tickets then we headed for a small corner shop and purchased some snacks and drinks for the journey. We waited on the platform at Wimbledon for 10 minutes before our train finally arrived at 8am exactly. 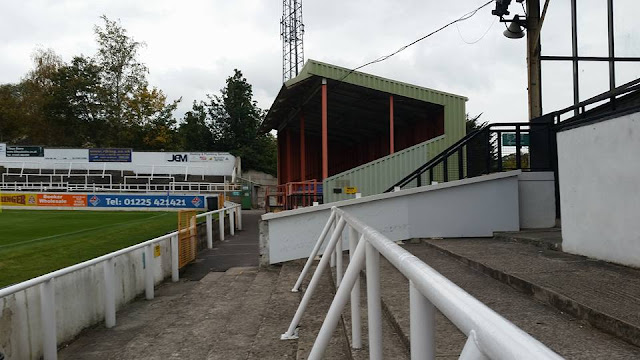 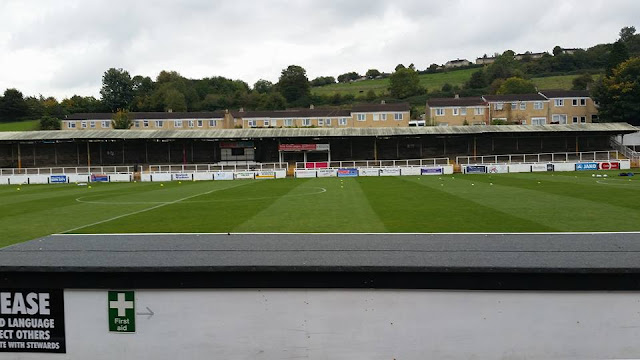 We had a 21 minute wait at Salisbury for our final train to Bath Spa so we headed for a shop called Pumpkin and purchased a warm bacon roll which I had purchased last season and I loved it so when we arrived at Salisbury we headed straight for the shop to buy them and we managed to get two and they tasted fantastic. If you ever find yourself at a station and there is a Pumpkin shop, I would highly suggest getting a bacon roll because I would give them 10/10. 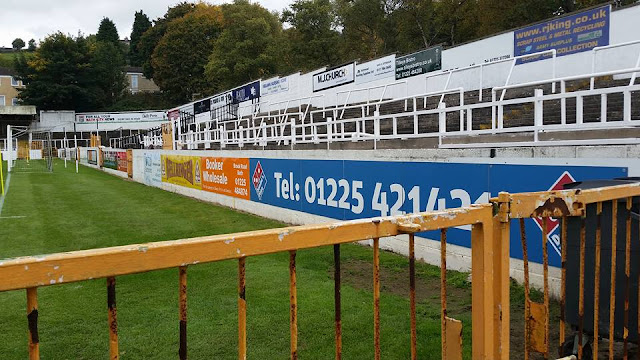 At 10am our train arrived in Salisbury and we was departing from Salisbury at 10:05am which was right on time. The train was very busy but we managed to get a seat. The rugby team that play in Bath were playing at home today so there was a lot of rugby fans on our train. The train stopped at around 5 or 6 stations on the way and we finally arrived in Bath Spa at 10:58am. 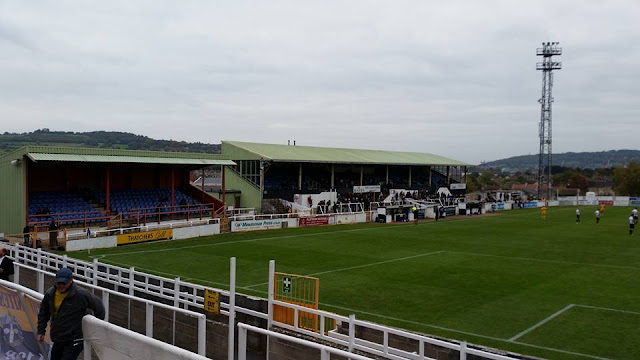 We walked out of the station and had a look around Bath and it was very busy as it was a rugby weekend in Bath. We stopped in Subway for some lunch as we had just missed the bus and once we had finished our lunch we headed for the bus station. We then had to wait 5 minutes for our bus. From the bus station in Bath you need to catch the number 5 bus which passes right next to Twerton Park. 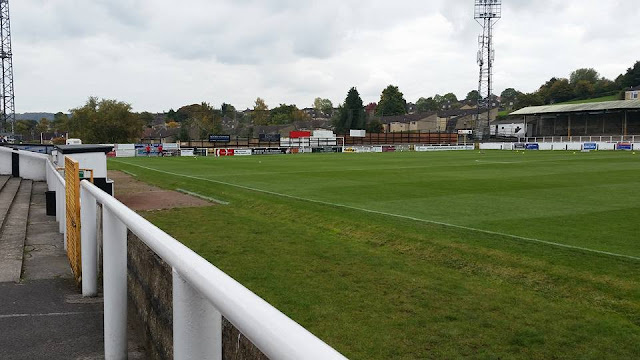 The bus takes around 15 minutes from the bus station to get to Twerton Park. There was a couple of Bath City fans on our bus and when we got off at Twerton Park they had a quick chat with me and my dad which made us feel very welcome and we each said `good luck` to each other for the match. 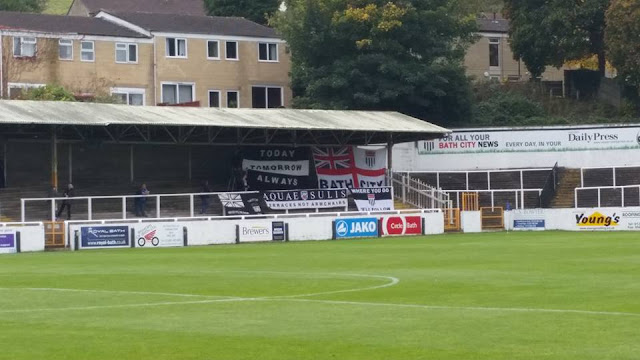 When you arrive at Twerton Park it is very dominating because the stadium is located on a hill which is higher than the road from where you get off the bus. The first time I went to Twerton Park last season, the ground does make you feel very small and intimidated. The structure of the ground is fairly old and does not have many modern features inside the ground either. It is a very traditional non league stadium. 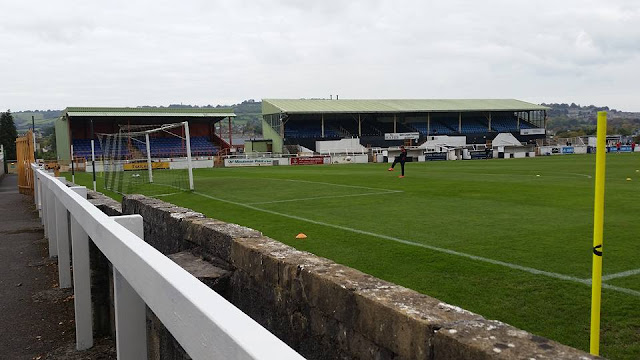 Twerton Park is fully of character. On one side of the pitch is two covered stands. The oldest of the two is the main stand. It looks like it has been there since the ground opened in 1909 but it was most likely built a couple of years after. The seating is covered and raised which means fans have to walk up a set of stairs to enter it. The roof of the stand is steeply angled and there are windshields each side and some supporting pillars. Below the seating area of the main stand is a paddock where there is terracing which allows the fans to stand just behind the dugouts. 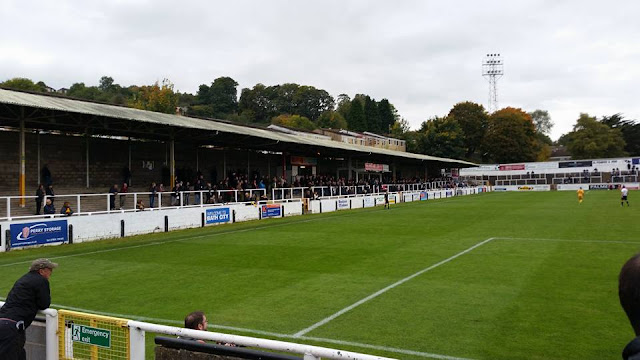 Next to the main stand is a more modern seated stand. It has blue seats and the metal is green. The seats are covered by the roof and there are a few supporting pillars. This is called the Family Stand and is given to away fans for segregated games. Opposite this side of the ground is a covered terrace which runs the length of the pitch. The terrace looks old and looks like it has not had any improvements since it was placed there. Behind one of the goals is the Bristol End. This is a large and steep open terrace which is given to away fans for segregated game. At the other end is a small open terrace with around 5 steps and features nets behind the fencing to stop the footballs from being lost. Then the floodlights are placed in each corner and are fairly traditional. (Small sections of the description of Twerton Park are sourced from Football Ground Guide). 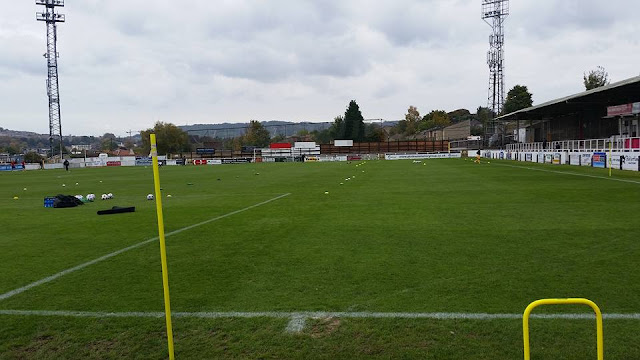 I really like Twerton Park, it would be a shame if Bath had any plans to add modern stands or terraces to the ground. After going round the ground to take some pictures, I got a cheeseburger from the tea hut which tasted really nice and by the time I had finished my cheeseburger, the game was about to start. Sutton took the lead within 5 minutes of the first half but soon after taking the lead, Sutton conceeded a penalty and Bath made it 1-1. 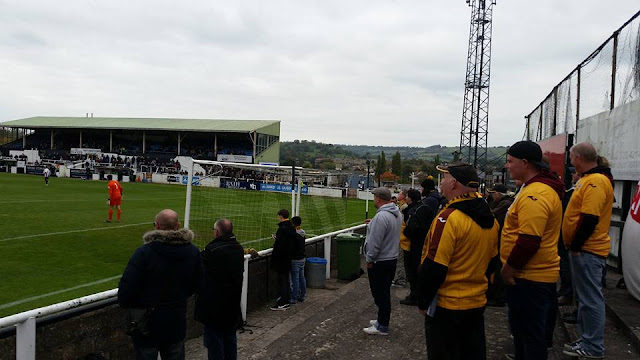 Half time and it was 1-1 and we changed ends and we walked round to the other end and put our flags up and I had a quick drink from the bottle of coke we purchased on the train earlier. Sutton seemed to play even better in the second half as we managed to get another two goals but Bath managed to have a number of chances but not score and we considered ourselves quite lucky. The game finished 3-1 to Sutton and we took the flags down, got the bus back to the station and then got the train back to Wimbledon. 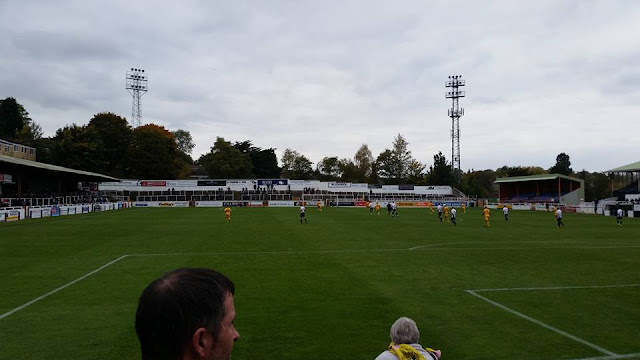 Bath City is an amazing team to go and watch, the ground is very good for non league and really traditional, the food at the ground is also very nice and the place has a really friendly feeling to it. The game was also good to watch and if you live in Somerset or near Bath and you are thinking about watching some football or go groundhopping, I would definitely suggest going to Bath as you wont be disappointed. 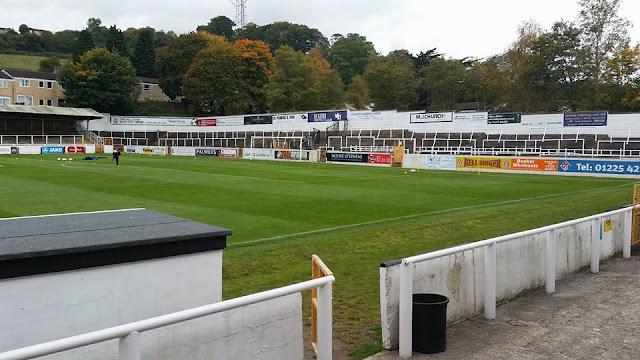 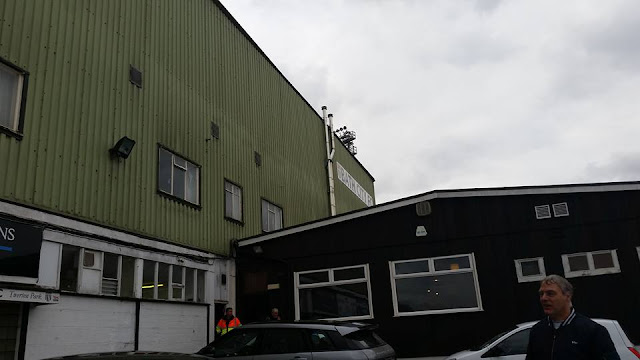 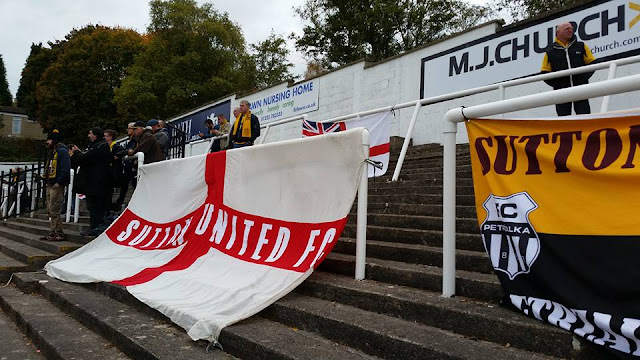 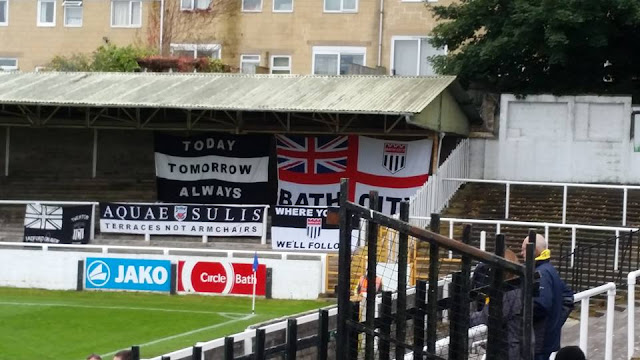