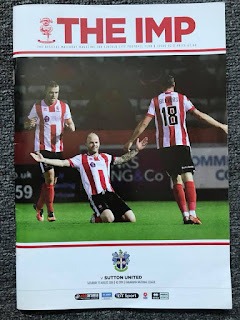 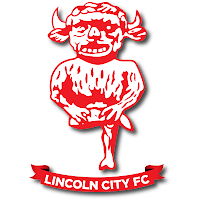 Lincoln City has also been a team that I have wanted to visit for a few months as they have a really good stadium and because they are an ex-football league club and I have heard good reviews from other people that have visited Sincil Bank. Ever since Sutton were crowned champions of the Vanarama National League South last season, I was most looking forward to watching Sutton play away to big teams like Lincoln themselves, Tranmere and Wrexham. Ever since last season finished, I was buzzing for Lincoln away and personally I wanted to get Lincoln away for the first game of the season but for Sutton`s second away game of the season, and their third game of the season, it was just as good as playing the game on the opening day. 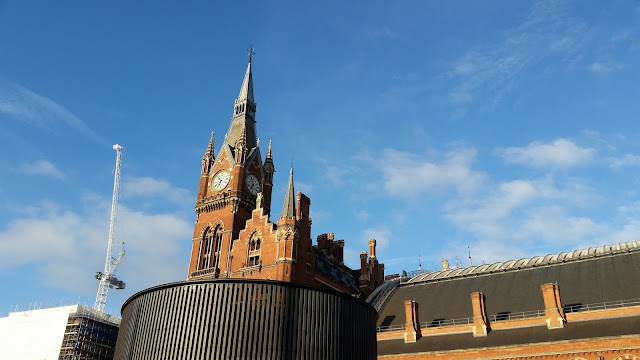 There is one thing that could potentially make the day out to Lincoln not as good as I wanted it to be and that is tiredness. Now Lincoln is around 2 and a half hours away on a train from London but we wanted to have a look around the city as reviews say that Lincoln is a really nice play and what else to do on the morning of the game but to look around the local area. This meant having to get up early and get to Lincoln early. Now today is going to be a great day, like it always is whenever I go and watch Sutton play away whatever the result is. The feeling and experience of watching Sutton play away can make anyone's day feel good after a stressful week. I myself have not had a stressful week but a long week waiting for this fixture. 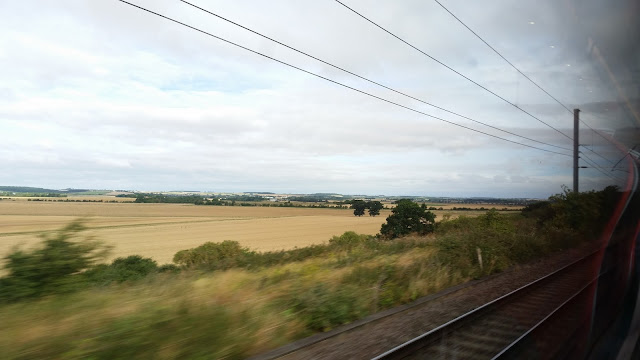 Now the plans for the morning was for me to wake up at 5:30am so me and my dad could get to South Wimbledon station for around 6:20am and get the Northern Line up to Kings Cross, St Pancras to catch our two trains to Lincoln for around 7:20am. Then we was hoping to get some breakfast either on the train or in Kings Cross. Our train leaves Kings Cross at 8:03am and we get off the train at Newark North Gate at 9:20am and we will have a 15 minute wait then we will get on another train at Newark North Gate at 9:35am and get into Lincoln Central at 9:59am. Then we are planning on having a look around Lincoln and then getting to the Sincil Bank for around 12:30pm. 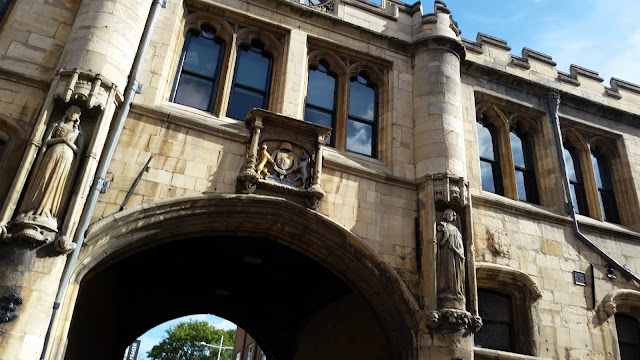 Lincoln City were founded in 1884. There nickname is called The Imps. They play at Sincil Bank which is an all seated stadium which has a capacity of 10,312. Last season in the Vanarama National League Premier, they finished 13th. For the majority of the beginning of the 21st century, Lincoln found themsleves playing in the football league in League Two. The  managed to stay in the football league between the 2004-05 season and the 2010-11 season. 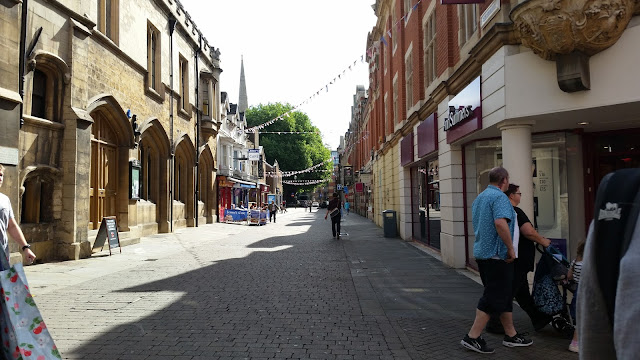 Now I have to say that getting the train to Lincoln is not the hardest journey for me to make. I was expecting to be tired for most of the day but I was so pumped for today`s game that my excitement overruled the tiredness. We started the day by waking up at 5:30am and I eventually got out of bed at 5:35am. I had a small breakfast bar and got dressed before leaving my dad`s house in Hackbridge at 5:55am. We then had a small drive up to a small industrial estate near South Wimbledon where we parked the car at 6:12am. We then had a 2 minute walk up to South Wimbledon Station and we was on the Northern Line at 6:15am. We then got off the Northern Line at Kings Cross, St Pancras at 6:47am. We then went to go and get a McDonald's around the corner for breakfast whilst we was waiting for our train. 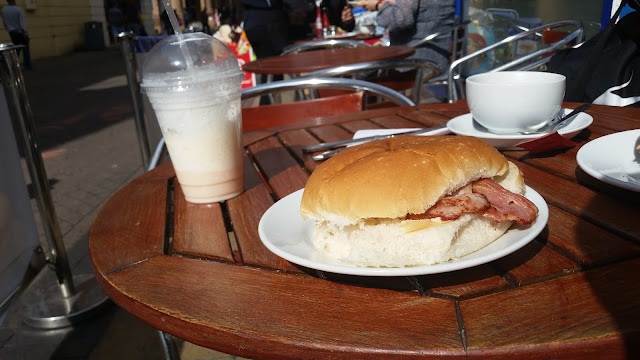 Whilst we was at Kings Cross, we saw my friends Ryan and Owen who were also going to the game but they was on the 9:03am train whereas we was on the 8:03am train. After looking at the departure board inside Kings Cross waiting for our platform number we finally got on the train at 7:59am, The train finally left Kings Cross at 8:02am which was 1 minute ahead of schedule.
We then arrived in Newark Northgate at 9:19am where we had to change trains to get to Lincoln. We was on the final train at 9:26am and the train left Newark Northgate at 9:34am. It was a peaceful final part of the journey up to Lincoln and we finally arrived in Lincoln at 9:57am. 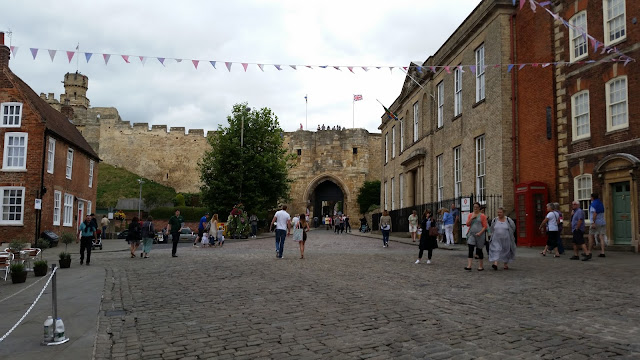 When we got off the train, we decided to go into Lincoln and have a look around and get some early lunch. We had a look around some of the shops in Lincoln and went to a local café in the high street and got a strawberry milkshake and a bacon roll for lunch. The milkshake was very nice and the bacon roll was okay. There could have been a bit more bacon. Then we went back to Lincoln station to meet up with my mates, Johnnie, Owen, Ryan, Theo and Luke who were on the 9:03am train. Theo stayed the night and he met us at the station and we went up to see the Cathedral in Lincoln before finally heading to the ground. 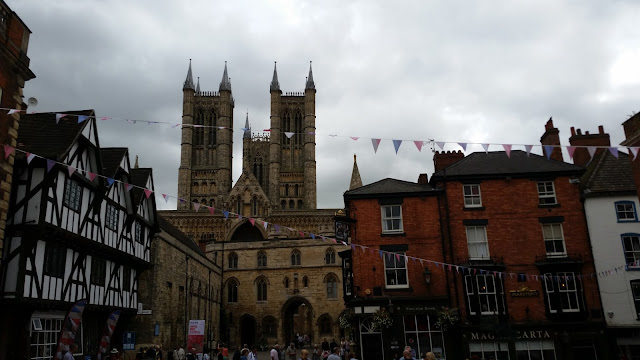 As the turnstiles did not open for another hour or so, we went in the bar which had a friendly feeling to the place and watched the early kick off game in the Premier League between Hull City and Leicester City. We then headed for the turnstiles. When I eventually went through the turnstile and into the stadium, I was very impressed. The ground is very big for non-league but you have to remember that Lincoln had spent over 5 years in the football league so I knew that they would have a big stadium. To be honest, I do like Sincil Bank as a stadium, the experience of watching football there in non-league was totally different to other stadiums in which I have seen Sutton play away at. 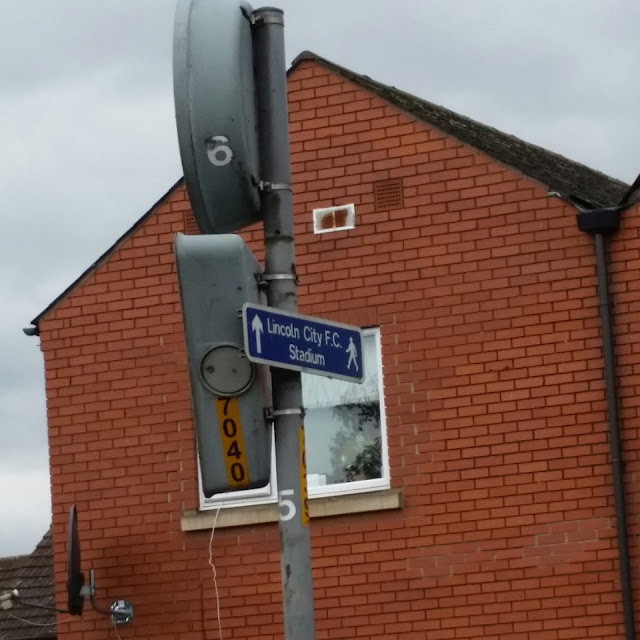 The main stand is called the Software Europe Stand and is the smallest stand in the ground in terms of length. Now no offense to anyone involved with Lincoln but I do not like this stand, it kind of feels out of place and it looks weird in a way. I feel that if the stand was wider, it would fit in more. Then opposite the Software Europe Stand is the Lincolnshire Co-Op Stand which is the biggest stand. It is made up of red seats and shows the words `Lincoln City` in white seats, I really like this stand and at one corner if this stand is where the 617 Squadron is located which is the group of Lincoln fans which chant and has drums. 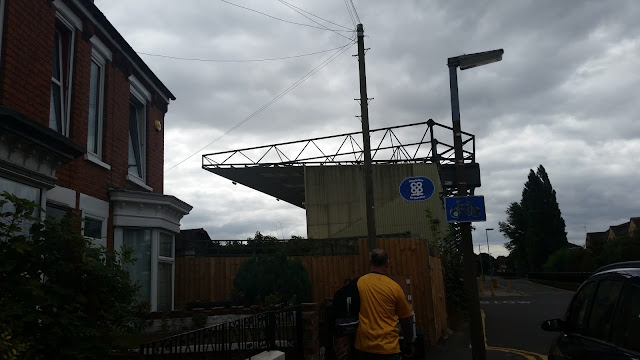 Then behind one of the goals is the Bridge McFarland Solicitors Stand which holds the executive boxes and has small rows of green seats which the letters `LCFC` in white seats. It is kind of a smaller version of the Family Stand at Selhurst Park (Crystal Palace). Finally our fans were in the Stacey West Stand which is for the away fans. It is a seated stand behind the goal made up of faded red seats and holds around 3,000. 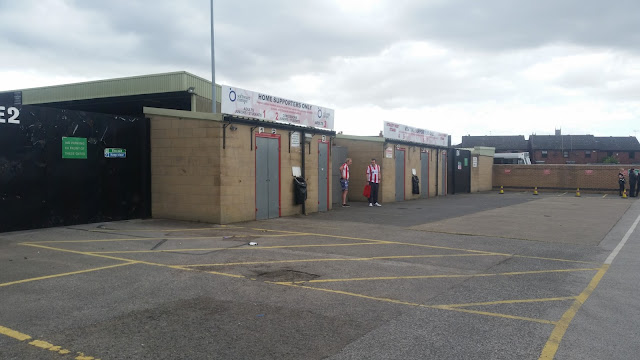 I did get a cheeseburger before the game which was good. It was not the best cheeseburger but it was okay. The atmosphere at the game was fantastic. The Lincoln fans were really loud before the game and they were really well organised with their drummers and their flags and looked really good. Our fans were also quite loud which was good seeing as we had only taken around 80 fans. When the teams came out, there was a roar from both sets of fans. 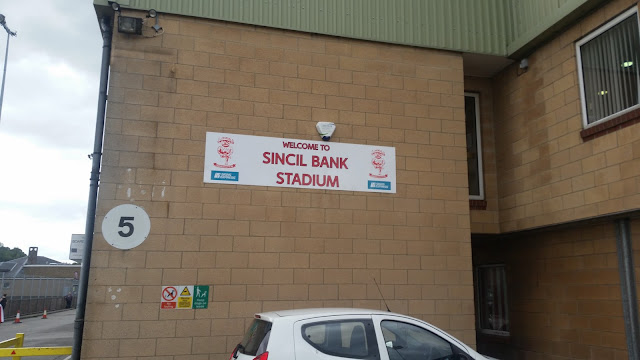 Sutton went 1-0 up after 23 minutes by Dan Wishart scoring a free-kick. Then on 30 minutes, things got worse for Lincoln as Bradley Wood was sent off and Lincoln were down to 10 men. Half time and we was actually winning and it felt weird to be winning at a place like Sincil Bank! We clapped the Sutton squad when they came back on. Then on 51 minutes, Lincoln made it 1-1 after Habergham crossed the ball in but it ended up going in. Then on 83 minutes, Sutton made it 2-1 with captain Jamie Collins scoring and then to finish it off, in the 90th minute, Sutton scored again with Roarie Deacon finding the net to make it 3-1. 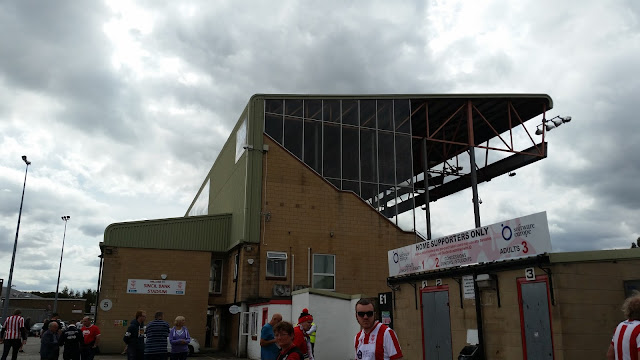 We then walked back to the station and got some abuse from some Lincoln fans but we just ignoref them. Once back at Lincoln Station, our train was already there so we didn't have to wait. We left the station at 5:24pm and we was at Newark Castle at 5:53pm. We then had to walk to Newark Northgate and we was at the station at 6:09pm. We had just under an hour till out train was due so we walked up the road and got some fish and chips for dinner which tasted very nice. Our train arrived at 7pm and we left Newark Northgate at 7:02pm. We finally arrived back at Kings Cross at 8:23pm and we was at South Wimbledon at 9:05pm and was back home at 9:27pm. 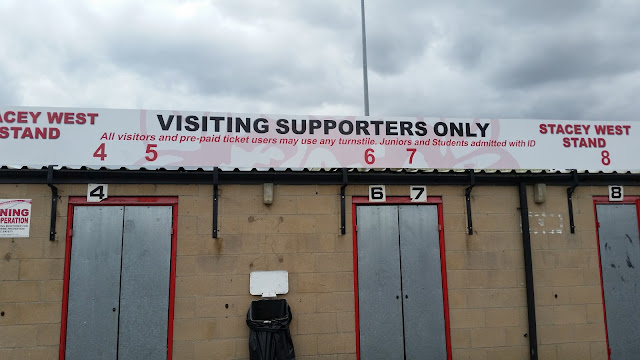 Now, I would recommend visiting Lincoln City for the stadium as it is a great stadium and one that I feel that you have to tick off but I wouldn't really go there with young children as some of their fans are quite abusive but I'm sure they wouldn't be towards someone with a child. On the whole they are friendly, but its those few fans that let the club down. The food at the ground is quite good and the atmosphere is very good! So overall, I would recommend going there. 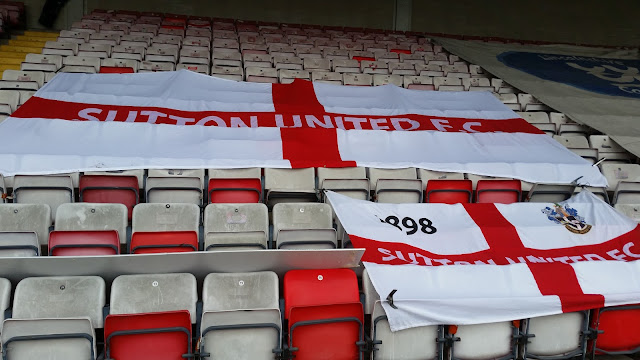 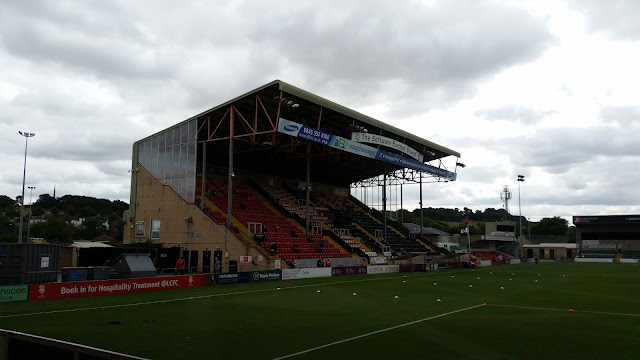 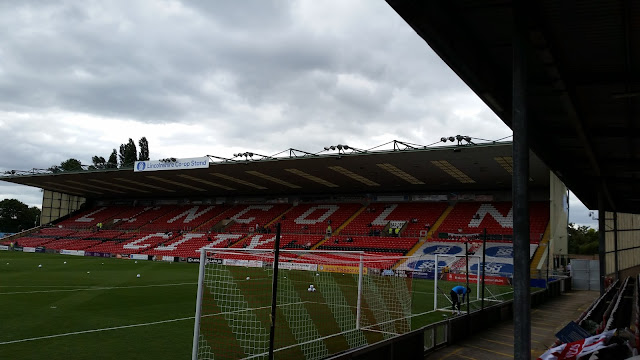 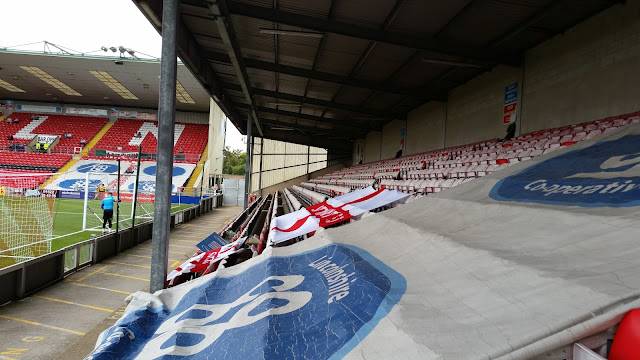 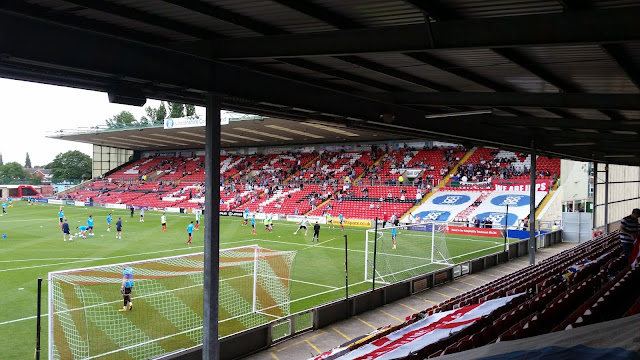 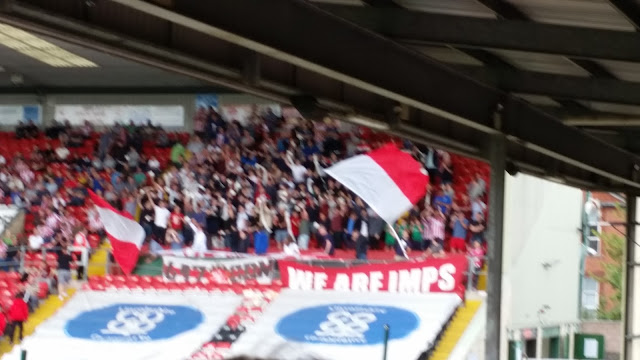 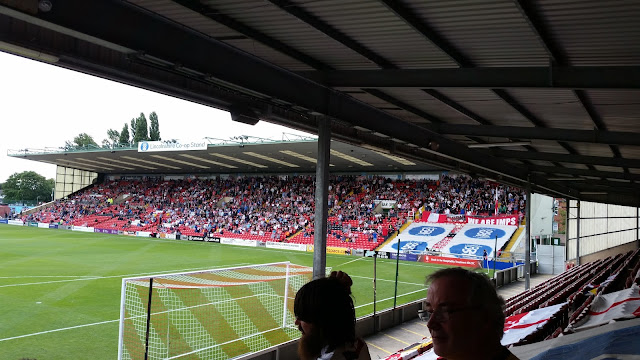