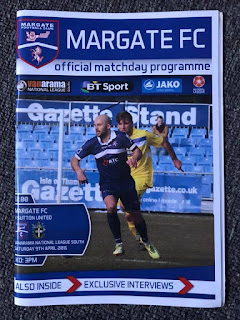 So as the end of the season was drawing to a close, it seemed like the games were getting better in my opinion. This weekend was probably going to be one of the best weekends of the season because we was going down to Margate to watch Sutton. A trip to the seaside and watching Sutton all in the same day, well you can`t get better than that. This was going to be a very good weekend. 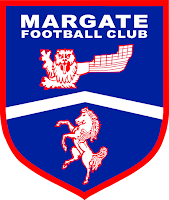 Now ever since the start of the season, I have been looking forward to Margate away because my dad knew when he got his shifts that he was off on that day and we would be abele to go to this game 100%. Now this is also my first time watching Sutton play away to a seaside town. Now there are teams such as Eastbourne Borough and Whitehawk in our league who are seaside towns but I have never been given the chance to go there. 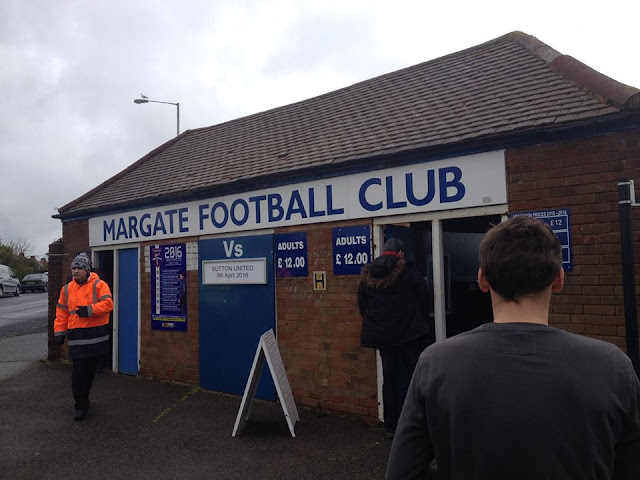 The plans for this weekend was to stay up until around 2am because I had to finish off some football manager and do some editing for my YouTube channel and then hopefully get a couple of hours of sleep and then wake up at 7am. We would then leave my house at 8:30am and make the 2 or so hour drive down to Margate which is located on the far-east side of Kent. We would then have a look around the local area, park the car and go in some of the local amusement arcades for a bit of fun, maybe have some lunch on the seafront and then head to the ground for around 12:30pm. 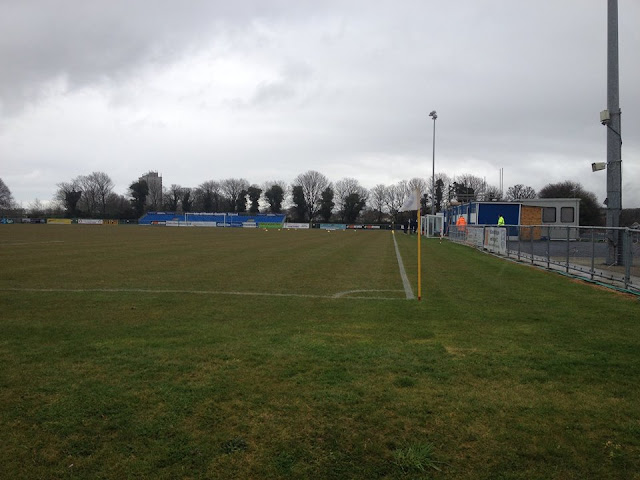 Margate F.C. were founded back in 1896 which is two years before Sutton were founded (1898). The clubs nickname is `The Gate` and they use this nickname in a lot of their chants. They currently play at Hartsdown Park which is a 2 minute drive away from Margate seafront and a 5-10 minute walk away from the seafront. The ground has a capacity of 3,000 and there is 400 seats. The club currently play mainly in dark blue and white. The chairman of the club to date is John Webb. Over the past few years Margate has had a few different managers and chairman's and the club has paid out a lot of wages on their players over the past couple of seasons. The club currently play in the Vanarama National League South. The club joined the Southern League in 1933. In 2001, Margate achieved promotion to the Conference Premier (Vanarama National League Premier). They had to ground share due to their facilities not being up to standard and after 3 years of ground sharing they were expelled from the Conference Premier. 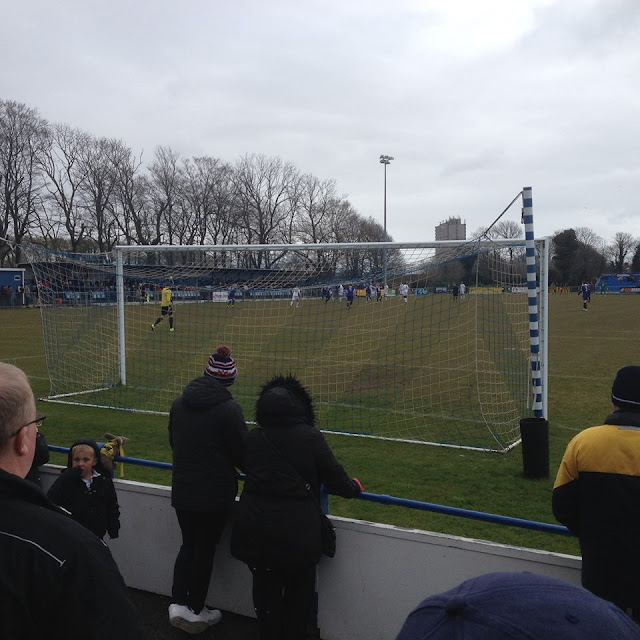 So after a long evening and early morning of playing football manager and editing some YouTube videos for my YouTube channel, I finally went to bed at 2:10am and I did not wake up until 7:15am as I gave myself an extra 15 minutes sleep. I quickly had a bath and then had a quick bowl of cereal before preparing my flag bag and snacks etc. My dad arrived at 8am and we checked we had everything before leaving my house at 8:32am. 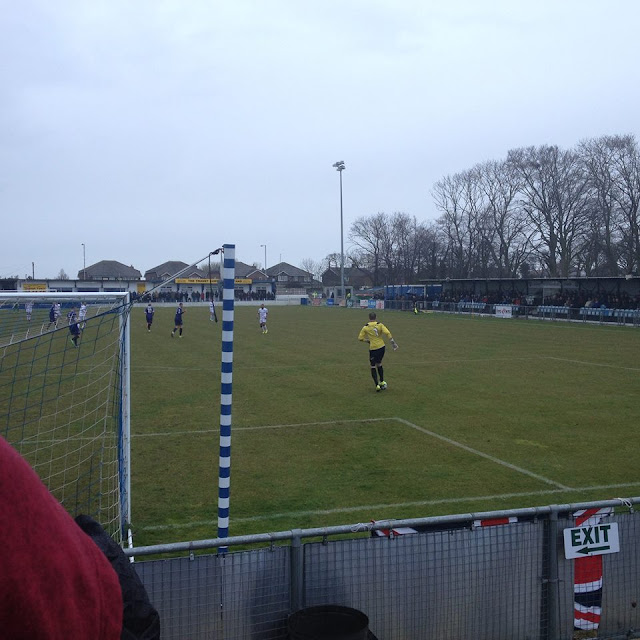 We drove down to Margate and the drive was quite relaxing and quite scenic as well, we spent most of the journey listening to music on the radio and also talking about the game that was only around 5 hours ahead of us. After driving for around 2 hours we finally got into Margate at 10:41am. The weather in Margate was terrible, it was spitting and the wind was very strong. The weather did say it was going to brighten up so we hoped for the best. 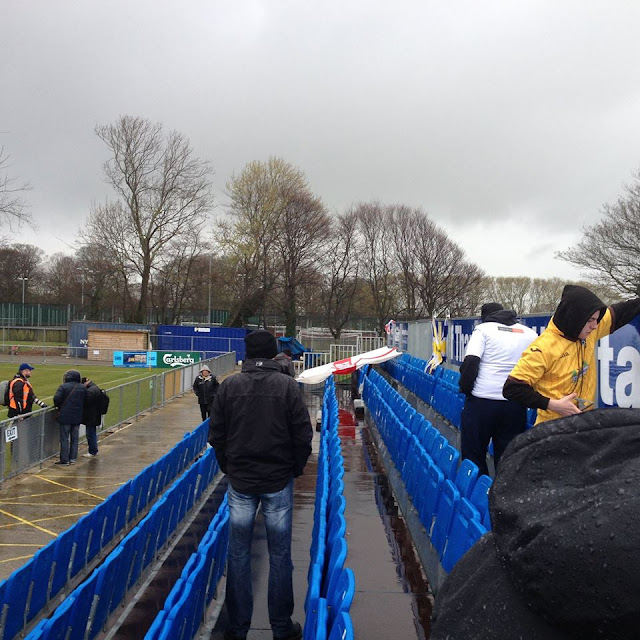 We parked the car out on the seafront and had a walk along the sea. We stopped in a couple of arcade amusements whilst we walked along the beach. We also headed to the local fairground called Dreamland but we said it was a bit too expensive and my dad did not have a lot of money so we headed out back to the seafront. We then got back in the car and drove up to the ground at 12:20pm. Once we parked up outside the ground, it was raining quite heavily so we stayed in the car for around 10 minutes but we gave in to the weather and we headed for the bar inside the ground. 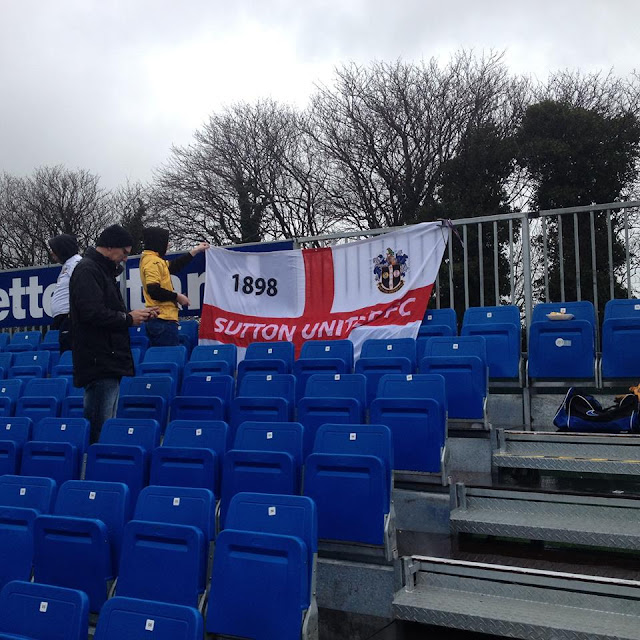 We went in the bar and watched the early kick off in the Premier League and there were a few Sutton fans already in the bar and we had a chat to our friend Terry and a couple of other Sutton fans. We then paid to get in the ground and then went inside the ground and took some pictures whilst the rain had stopped. After taking some pictures of the ground, I started to really like the overall feeling of Hartsdown Park. 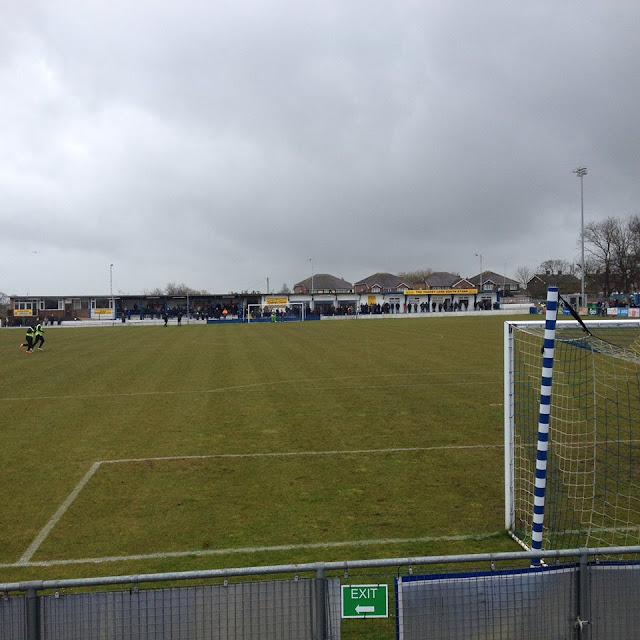 Hartsdown Park is a really simple stadium. The main stand(s) are made up of two small seated stands put together and put together it probably holds around 150-200 seats. Then opposite this stand is an open area where the changing rooms are located. Then behind one of the goals is kind of the main area of the stadium. The bar and taxi company office, yes a taxi company office is located is a part office part standing stand/terrace. Then behind the other goal is a temporary seated stand with around 200 seats. The stand according to the club was hired from a company called `Grandstand` and this stand has been at Hartsdown Park for a few seasons now. I was informed by a member of Margate F.C. that this stand was removed at the end of the 2015-16 season and now it is just an open area. (Description of Hartsdown Park is sourced from Football Ground Guide). 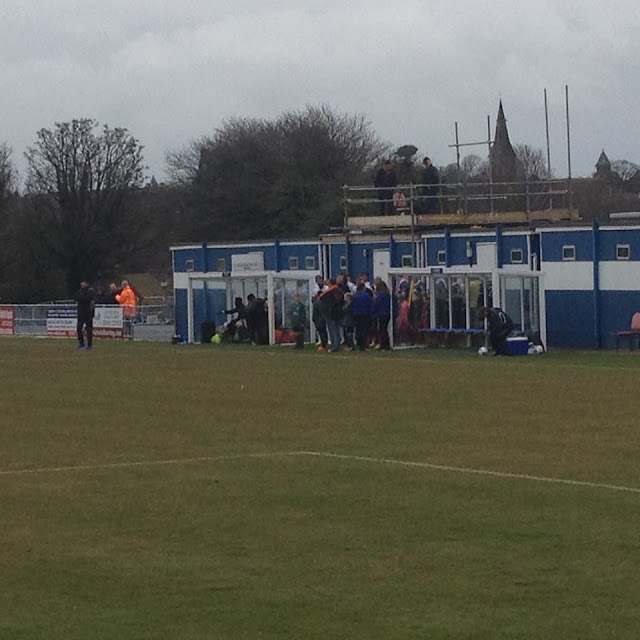 Around 20 minutes before the game, we went and stood under the covered section behind the goal and some other Sutton fans joined us and we had a chat about the horse racing and the expectations for today's game. We chatted so so long, we didn't take any notice of the players warming up. Then the teams came out and a lot of Sutton fans started to stand with us and we started some songs to get the atmosphere going. The weather was still really bad as it hadn't stop raining for most of the day. 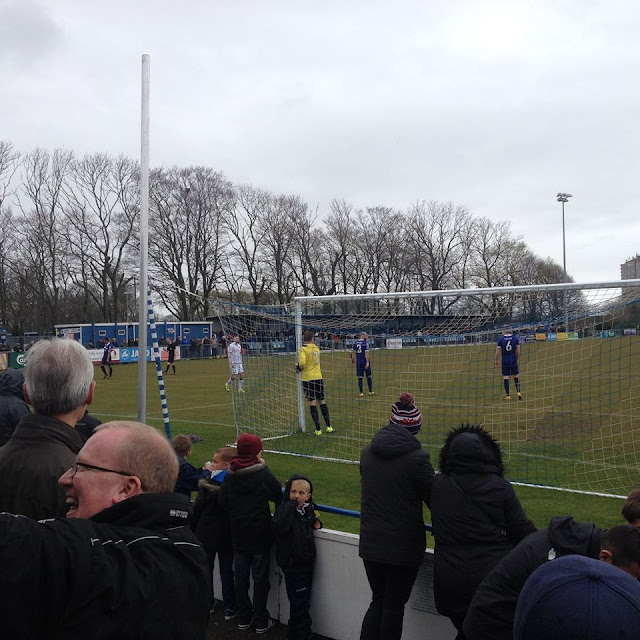 The first half saw great chances for both teams to score but it was Sutton who took the lead as Tom Bolarinwa turned in the box and shot and the Margate keeper was unable to stop the shot and this lifted the spirits of the Sutton fans. Sutton were then treated as Dan Fitchett was tackled inside the box and Sutton was rewarded by being given a penalty. Bedsente Gomis stepped up to take the penalty and scored and we felt like this was going to be our day. 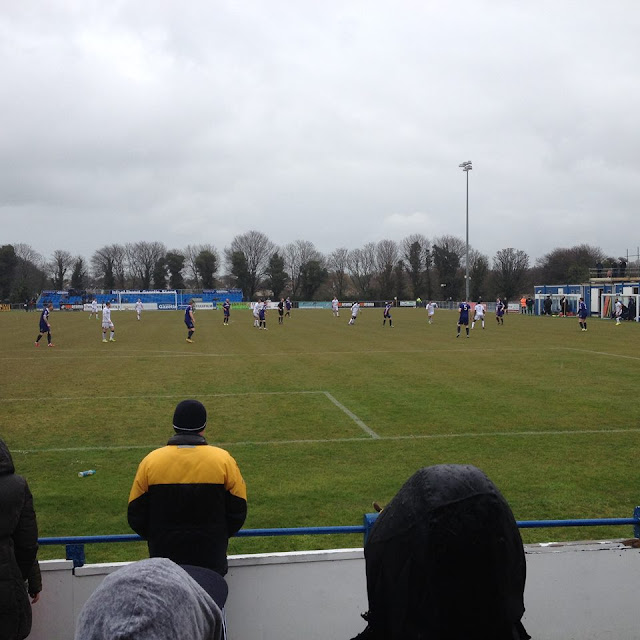 The referee blew his whistle for half time and Sutton were 2-0 up and we felt very happy but the only thing that was annoying was the weather. We took the flags down and went round to the other end and put our flags up on the seats. The weather still was very bad and this had a bad effect on the atmopshere as a lot of people were cold and wet but me and a few others continued to start some chants to keep the spirit up and this was rewarded as Sutton managed to get two more goals in the last 10 minutes of the game as Kevin Amankwaah and Dan Wishart both scored and the game ended 4-0 to Sutton and it was one of the best Sutton games I have ever watched. 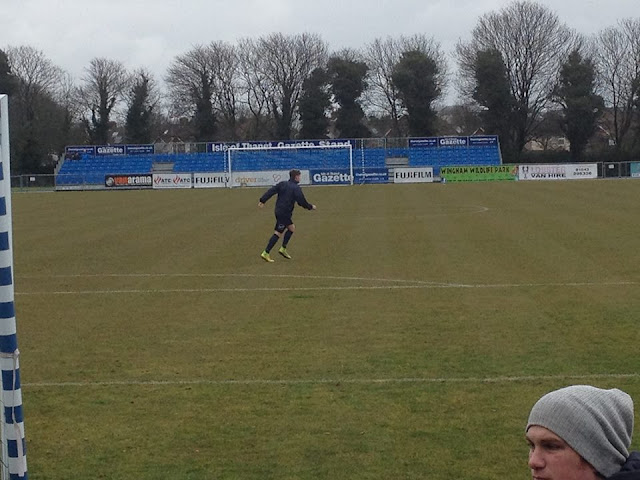 We clapped all the players and then took the flags down and we headed back for the car feeling very happy but very cold and wet. Harrison and Terry both got in the car with us as we agreed to drop Terry off at the station and we said we would drop Harrison back home. The journey back home felt quite long as we just wanted to go home but we stopped in some services and had a McDonalds for dinner. We then dropped Harrison back home and I got back home at 8pm feeling verry happy but very tired. 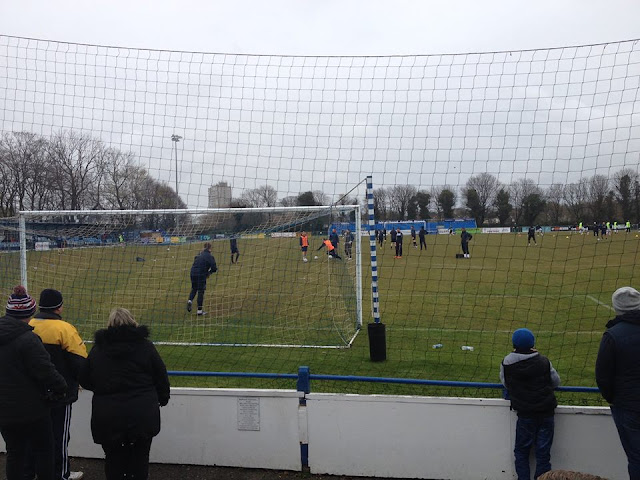