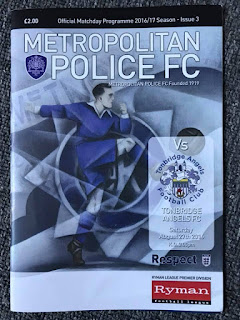 
Today I find myself in a bit of a puzzle because today Sutton United were playing away to Chester and I was not given permission to go to the game which only meant one thing, I had to do some groundhopping. Now there were quite a few games that was a possibility for me going to today. Dulwich Hamlet were playing at home to Canvey Island but I have a Dulwich blog coming up soon so I decided not to go to this game. Merstham were playing at home to Hendon but again I have recently done a Merstham blog so I decided that there would be no point in going there at this time. 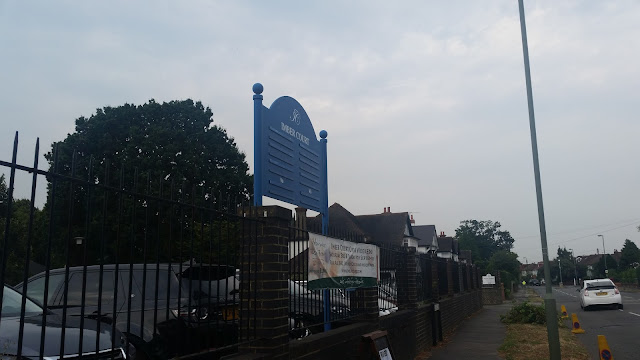 I have not watched Metropolitan Police for a long time. The last time that I watched them was in fact the first time I watched them. This was at the start of the 2014/15 season when Met Police were playing at home to Margate and Met Police lost 3-0 and when I went to that game, I really enjoyed myself so when this oppertunity to go back to Metropolitan Police F.C came around, I didnt hesitate in making the decision to return to Imber Court. 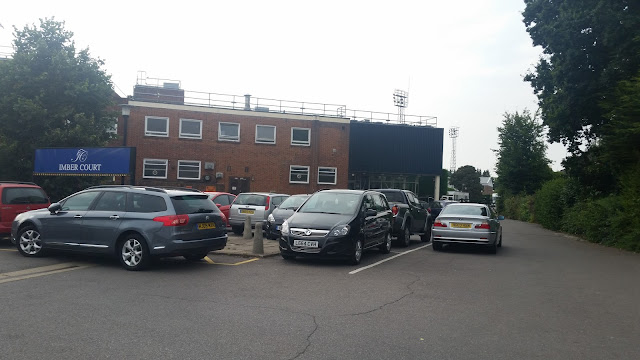 Now the plan for today was to finish off my Merstham blog which by the time you are reading this, the Merstham blog will have already been published and then meet my dad at Sutton Bus Garage to meet him when he finishes work at around 1pm. Then we will probably go back to his house so he can get changed and then drive up to Imber Court and get there for around 2pm. 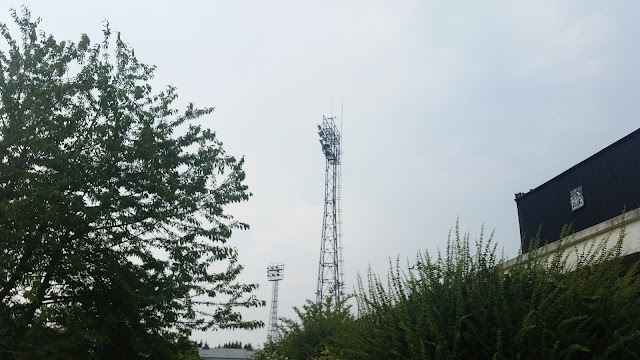 Metropolitan Police F.C. were founded back in 1919 so that the police could keep fit and have something to do basically. The original team consisted of serving police officers but this rule was removed when the Commissioner refused to sanction time off for the team. The club has not had a serving officer since 2011. The club now consists of mainly semi-professional footballers. The club is based at Imber Court which is a police training facility located in East Molesey. The training facility has a stadium called Imber Court which has a capacity of 3,000. The club`s main achievements have been in the London Senior Cup and the Surrey Senior Cup. 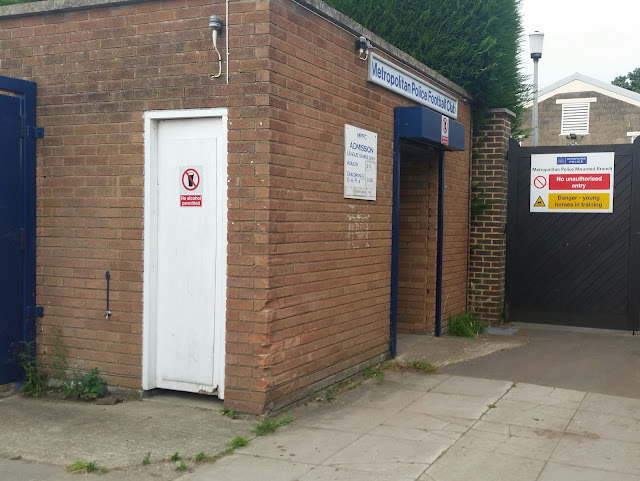 So I left my house at 12pm to go and get the bus to Sutton Bus Garage to meet my dad. When then went back to his house so he could get changed. We then watched some TV before heading out to drive out to East Molesey at 1:35pm. It is a fairly simple drive to Imber Court, we just have to go down the A3 for around 5 minutes and then we are about 5 minutes away when we come off the A3. We finally arrived at Imber Court at 2:10pm. 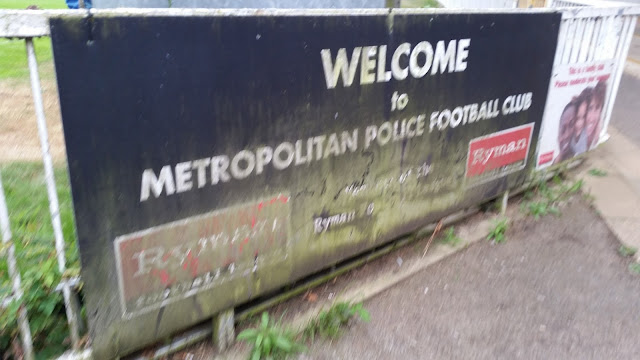 When we got into the ground the memories of coming here nearly two years ago came straight to my mind. When I entered the ground I got a small buzz of excitement because when I go to Imber Court I find it different to other grounds because the experience of there being not a lot of people watching the game makes the game different to what I am used to and as a groundhopper, I like to experience different feelings that different grounds offer. 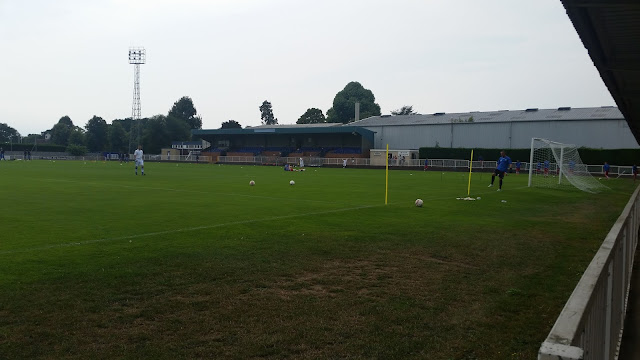 I really like Imber Court. It is a very neat and tidy stadium and is definitely good enough for the Conference South but I feel that there could be another covered terrace to make the ground a bit better. The turnstiles are opposite the main stand. The main stand sits on side of the pitch and holds around 100 blue seats. This stand was installed back in the 1980`s. This side of the stadium also holds the toilets and tea hut. Then opposite the main stand is an uncovered walkway with some steps that runs the length of the pitch. This walkway is very narrow as well. 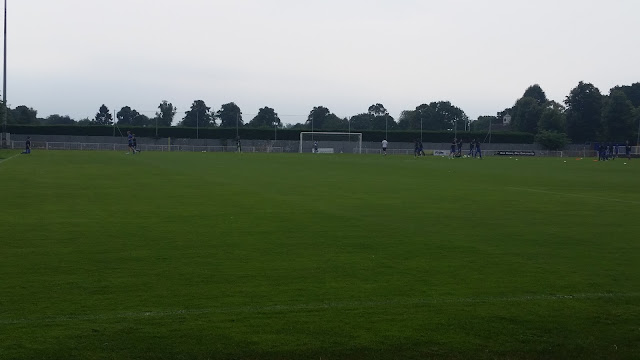 Then behind one of the goals is a covered terrace. This terrace is quite big for a team like Metropolitan Police F.C. and suits the Conference South so this terrace is quite out of it`s league. Then behind the other goal is an open area with a couple of steps. For some reason I really like Imber Court, even though I have only been here twice I love watching football here but the ground really lacks atmosphere which is a dissapointment. 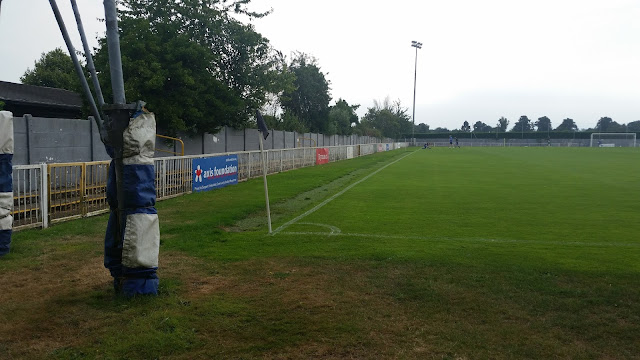 Once inside the ground, we got a match day programme and we purchased a golden goal ticket for £1. We then headed round the stadium to take some pictures and the more we went round the ground, the more I seemed to like the ground. After taking some pictures, we headed round to the tea hut by the side of the main stand to get something to eat and drink. The food is very cheap at Imber Court, you can get a cheeseburger for £2.50 and a hot chocolate for £1. This means this is cheaper than just a burger at a National League stadium. The cheeseburger was amazing, the cheese was melted perfectly onto the burger and the hot chocolate was also really good. The cheeseburger was so good that I went and got another one. 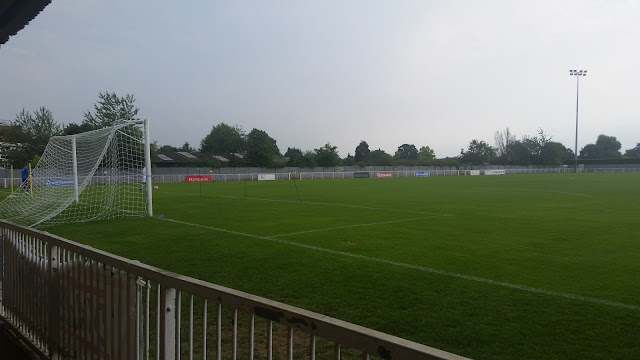 By the time I had finished my second cheeseburger, the teams were about to come out so we went up to the main stand as it was were we decided to sit for the first half. The game kicked off and surprisingly the game started off very quickly as Tonbridge Angels took the lead within 2 minutes as Nathan Elder put the Angels in the lead. Tonbridge then had a few chances to score again and so Met Police also had a few chances to score but failed to score. Half time and it was 1-0 to Tonbridge and I felt disappointed that Met Police were losing but at least we had seen a goal. 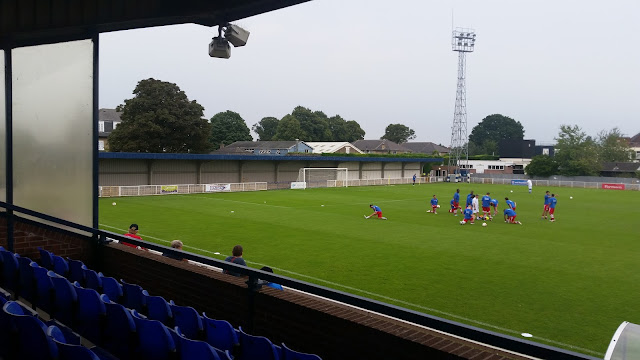 During half time, we got a cup of coffee and I got another cup of hot chocolate. I have to admit, if you are looking for top quality food and drink at a football match, then Metropolitan Police F.C. is the place to come. We decided to stand behind the goal that Met Police were kicking towards for the second half and again both teams had chances to score but it seemed like Tonbridge Angels would scrape a 1-0 away win but out of nowhere, Met Police created a quick and fast attack and managed to find an equaliser in the 90th minute and me and my dad went wild as we wanted Met Police to get something from the game and they did. 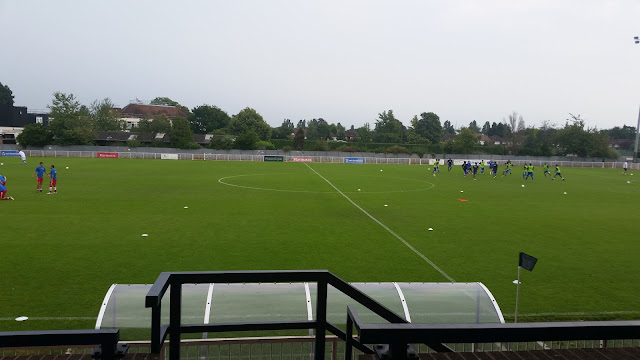 The game was not very fun to watch to be totally honest, I love Imber Court but I feel that the way that Met Police play there football is not really attracting for me to watch. Met Police tend to play football with taking lots of touches and passing the ball slowly whereas I like very attacking football so this did let me down a bit but this got Met Police a point so it must work for them so I can`t really complain. I would recommend going to Metropolitan Police F.C. as they do great food, the stadium is decent and the people of the club are very friendly. 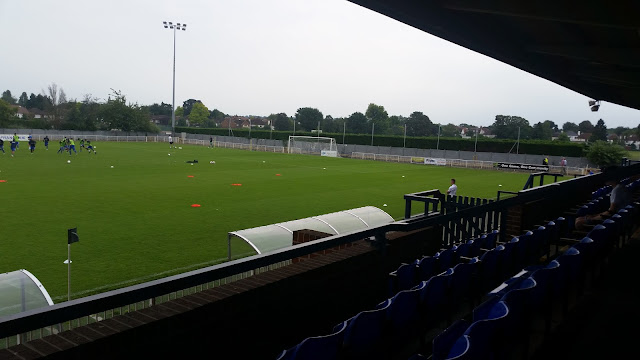 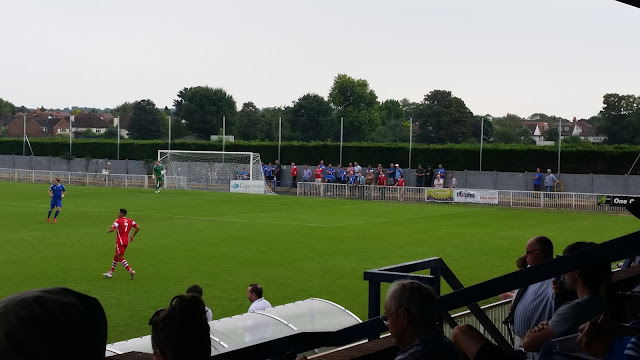 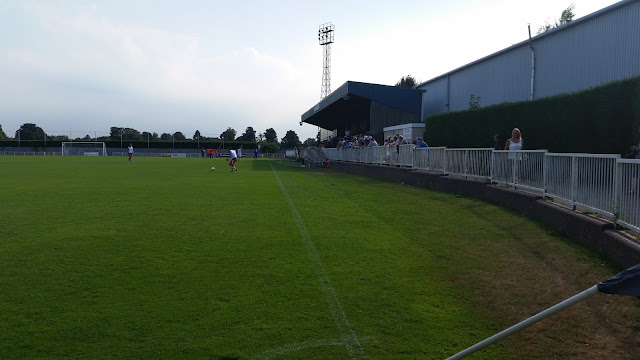 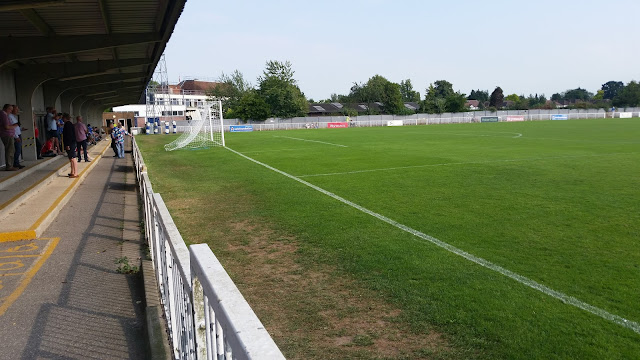 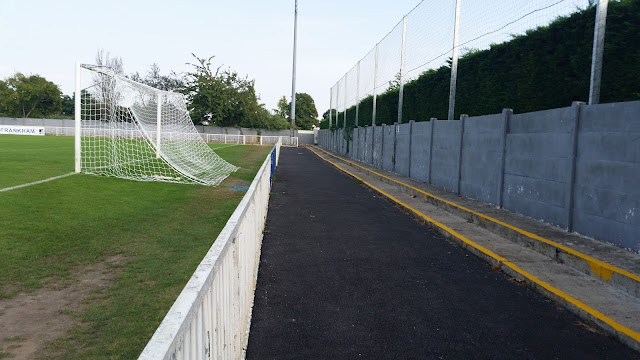 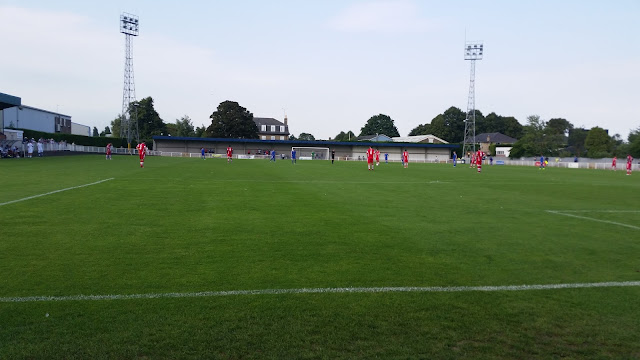 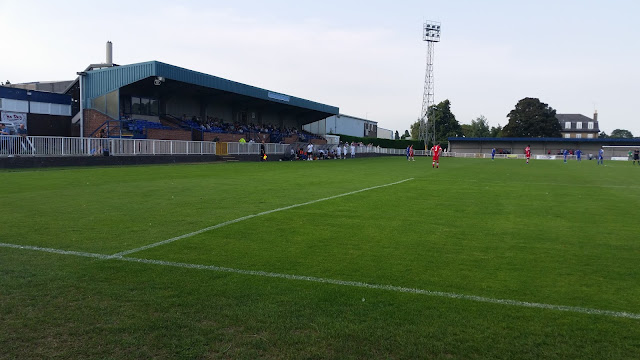 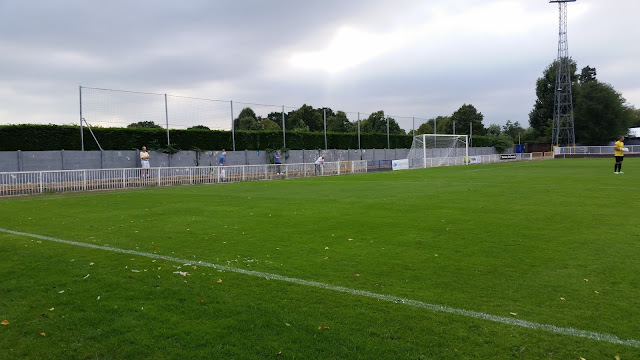 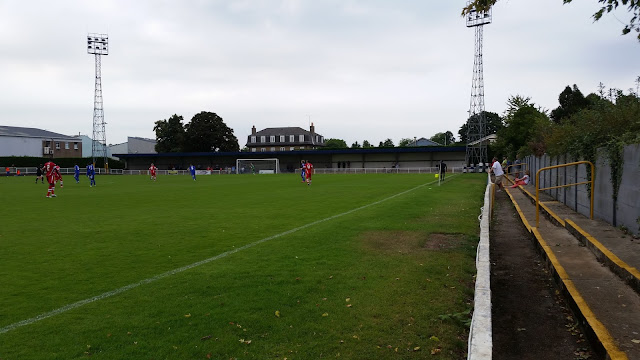