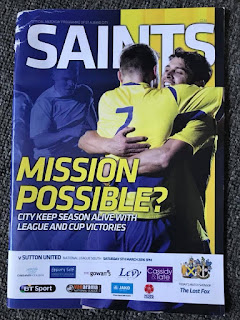 Today Sutton were playing against a team that I very much enjoyed visiting last season and that team is St Albans City FC . The reason why I like going to watch Sutton play away to St Albans is because last season (14-15 season) we won at their ground 4-2 and St Albans are a very mid-table team which meant it could be a good chance for Sutton to get another 3 points at their ground and Clarence Park is a beautiful stadium for non-league. 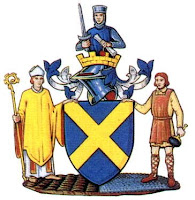 Todays games was going to special because today was the 5th March which was the date when Sutton United were formed back in 1898 which meant that a win on the clubs birthday would be excellent and it made the game a bit more competitive. Like last season`s visit to Clarence Park, we was going to get the train as it is the quickest and easiest way to get to St Albans as it only takes around an hour and 20 minutes and it is easy for me as I can go into Sutton to get the Thameslink or go to my local National Rail station which is Mitcham Junction and get the Thameslink from there. I also was planning on looking at the history of St Albans City FC whilst on the train. 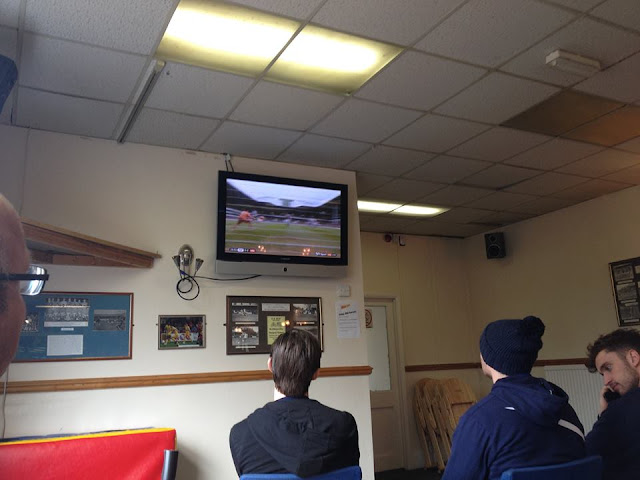 The plan was to meet at Sutton Station at 9:30am and meet up with Johnnie, Harrison and Ryan and catch the 10am train which goes straight to St Albans. This was Ryan`s first Sutton away game and I had never seen him before but he had been to a couple of home games recently but he got in contact with Johnnie about coming to St Albans with us. We was planning to get to St Albans for around 11:30am and go straight to the bar to watch the early game in the Premier League in the bar as we didn't go in the bar last season. 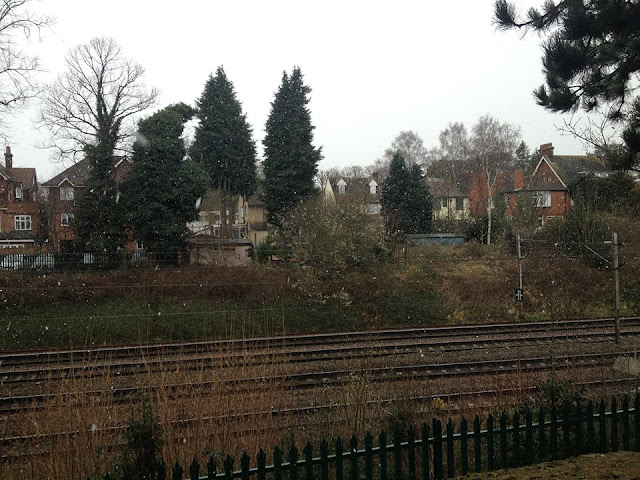 So the day finally arrived when I was finally going back to St Albans. I woke up in the morning with a buzz of energy with my mind set on the 3 points today. I had a bowl of cereal for breakfast then headed straight for the bath then got dressed. My dad arrived at my house at just after 9am and we left straight away. We drove into Sutton then got the bus to Sutton Station for 9:20am and Ryan was already there. Soon after that Harrison arrived and then Johnnie arrived 10 minutes later and we had a good talk about our predictions for the game today. We got straight on the train and whilst on the train, I was able to look at the history of St Albans City FC. 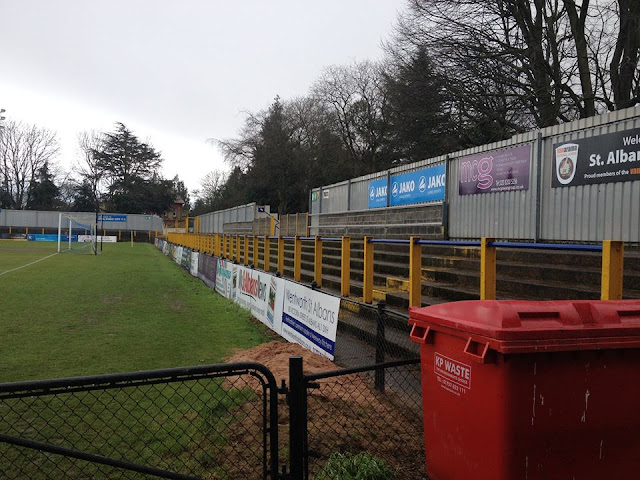 St Albans City were founded in 1908 and play in the city of St Albans which is in Hertfordshire. The clubs nickname is `The Saints` and `City`. They currently play their home games at Clarence Park which is just a 5 minute walk from St Albans City station. The stadium has a capacity of 5,007 and the main stand at the stadium holds 667 seats which is quite good for the Vanarama National League South. St Albans were a big side in the Conference back in the early 2000's but they were relegated down to the Conference South at the end of the 2006/07 season. The club suffered financial problems in the 2009/10 season and they were kicked out of the Conference South in the 2009/10 season. They played in the Southern League Premier for the 2010/11 season and they found there way back to the Conference South at the end of the 2013/14 season after winning in the play offs and to this day, they are still in the Conference South. 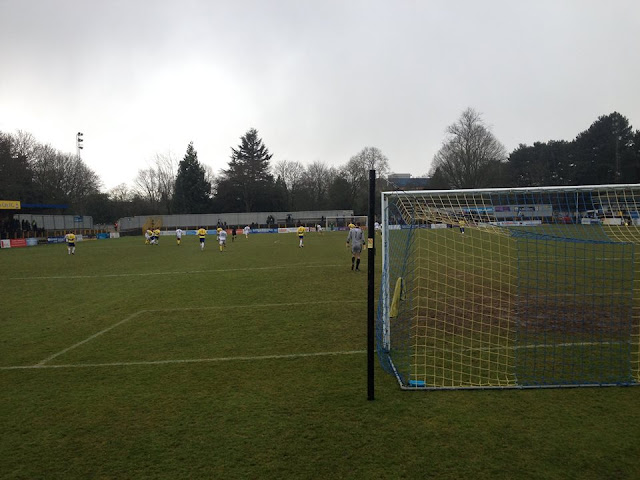 We were all buzzing for this game and it was clear because we spent most of the train journey talking about our memories from our trip to Clarence Park last season and what our expectations were for today's game. We saw some Barrow fans get off at Elstree and Borehamwood as they were playing away to Boreham Wood and we wished them luck for their game. We finally arrived in St Albans at 11:30am and we walked to the ground which is just a 5 minute walk away from the station. We paid to get in and then walked round to the bar. 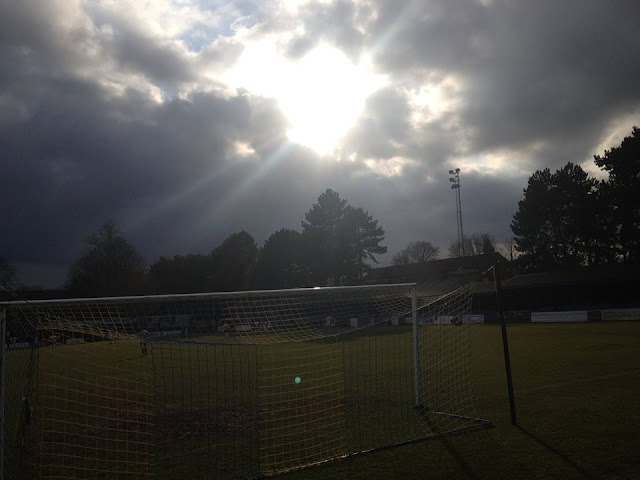 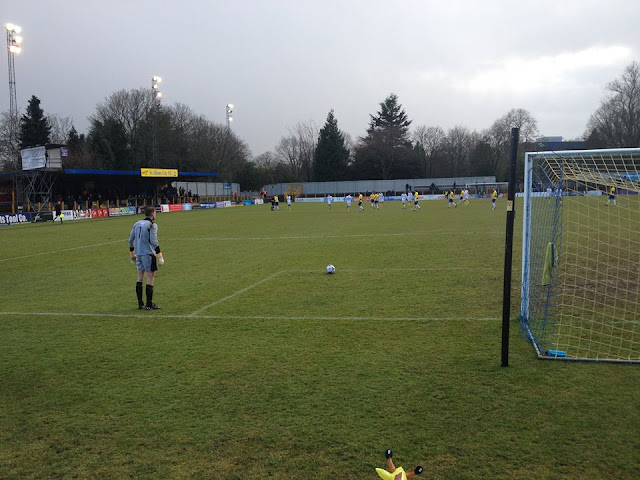 Clarence Park is a stadium that I really like. The ground is mostly uncovered apart from the main stand and a terrace opposite the main stand. The main stand holds the changing rooms and the bar. The bar is small but it is warm and has a really friendly feeling. The main stand is not very high but it runs the length of the pitch. It also holds 667 seats. Then opposite the main stand is the Cricket Pitch Side. This holds a small covered terrace located by the half way line, then on either side of this covered terrace is uncovered concrete terracing. Then behind both goals is concrete terracing which is uncovered. At the Clarence Park End, there is a segregation fence which is used when games are segregated. 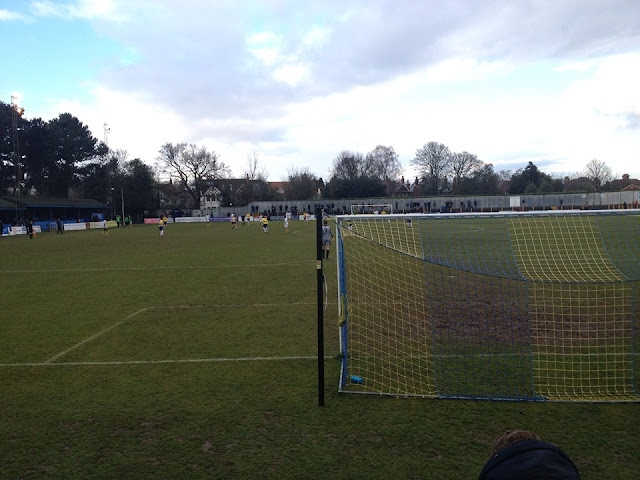 We then stayed at one end and luckily enough it was the end Sutton were kicking towards, we then put up our flags. Within the first 5 minutes, Sutton were 1-0 up as new signing Ryan Burge scored and we all went wild. Then after about 20 minutes, our friend David finally arrived. After he arrived, it started to rain and snow but we stayed out behind the goal whereas most fans went for the covered terrace and the seated stand. 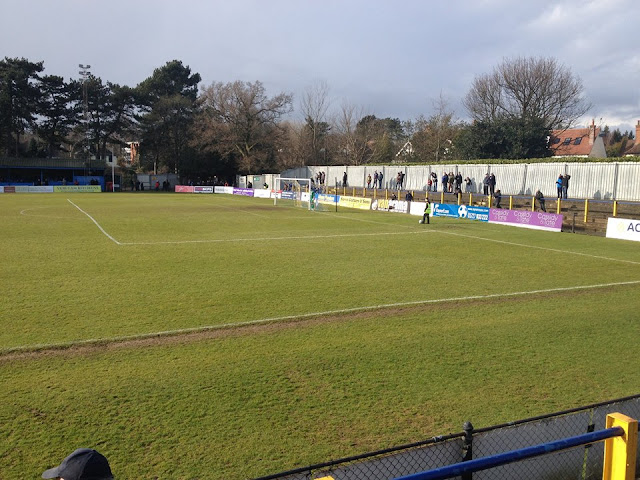 Half time and it was 1-0 to Sutton and we were feeling very positive because we were playing well ande we had dominated the first half as we were creating the majority of chances and St Albans hadn't had many chances, so we deserved to be 1-0 up. We took our flags down and then walked round to the other terrace behind the other goal and then clipped them back up and I also had a chat with fellow Sutton fans Dan and Nick who are part of the Gandermonium group which are a small group of Sutton fans. 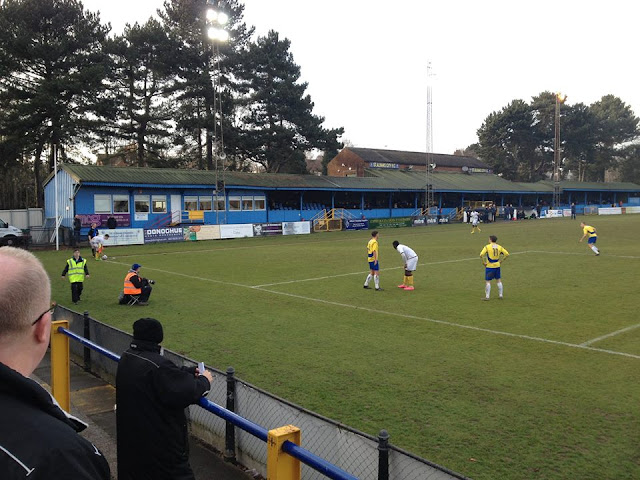 I then chatted to Johnnie, Ryan and Harrison for a couple of minutes and then the teams came back out and we gave a loud cheer and round of appaluse when Sutton walked back out. The second half started and Sutton dominated as soon as the whistle blew and this benefited Sutton because in the 55th minute, Ryan Burge scored again and it was 2-0 Sutton after 55 minutes and new signing had gotten quite a few goals already in his Sutton career. St Albans had a chance to then get back into the game but Sutton handled it well and Sutton scored again as defender Dean Beckwith scored a header and we all went wild because after 61 minutes, the game was pretty much over for St Albans. They did have a chance of trying to somehow get back into the game but failed and it seemed like Sutton were going to win 3-0 on the clubs birthday and we did just that. 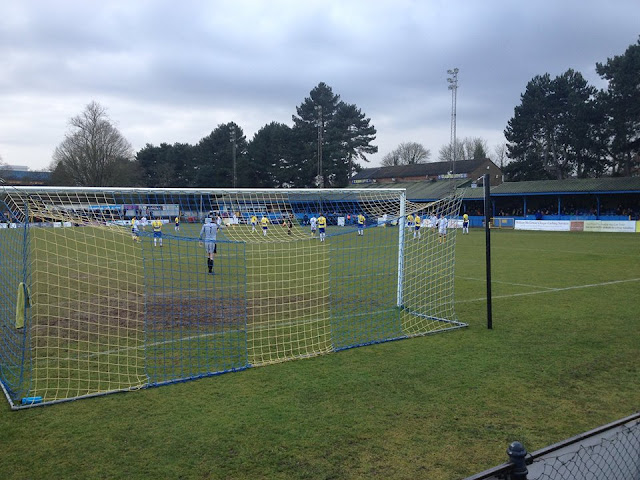 The game finished and we clapped the players off and took the flags down and walked back to the station whilst chanting because why not, we had won away from home and it is the clubs birthday so why not sing loud and be proud of your club. The train was a short wait and we even chanted on the train as well for about 10 minutes as our train carriage was empty but as it got busier, we stopped chanting and then sat down and we finally got back into Sutton at 6pm. We said goodbye to everyone and then got the bus back to the car and we got back home at 6:30pm and I had really enjoyed my second visit to Clarence Park and I would heavily recommend going there.