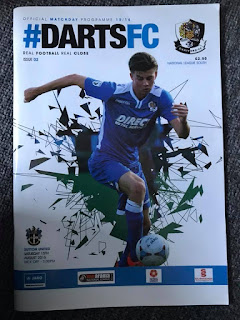 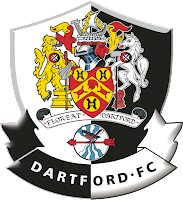 Over the years of watching Sutton, I have always been watching old highlights of Sutton games over the years and I always come across highlights from when Sutton have played against Dartford when both clubs were previously in the Ryman and their stadium (Princes Park) is so modern yet so non-league it made me fall in love with Princes Park which made me want to go there even more and now I had to chance to be able to go there. 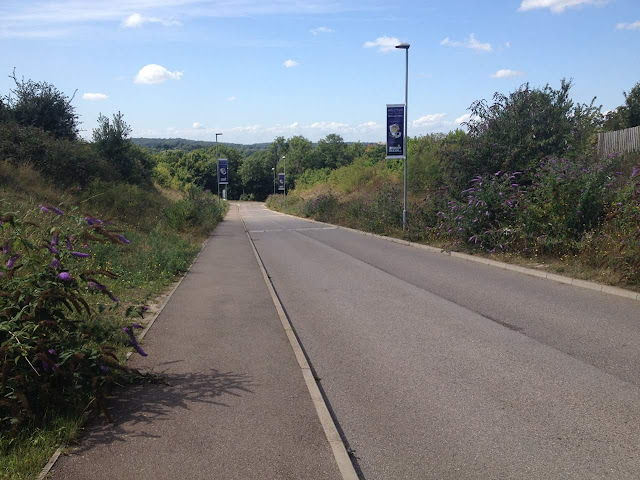 Dartford F.C. were formed back in 1888 and they play in the outskirts of Dartford (10 minute bus ride from Dartford train station). The clubs nickname is `The Darts` and they in the colours of black and white. They currently play at Princes Park which was opened in 2006. Princes Park has a capacity of 4,100 and there are 642 seats which is quite good for the level that Dartford play at. Dartford currently play in the Vanarama National League South but over the past few seasons they have survived in the National League but last season they were relegated down to the National League South. Dartford were Ryman Division One North champions in the 2007/08 season and they were champions of the Ryman Premier in the 2009/10 season after only being in the league for two seasons. 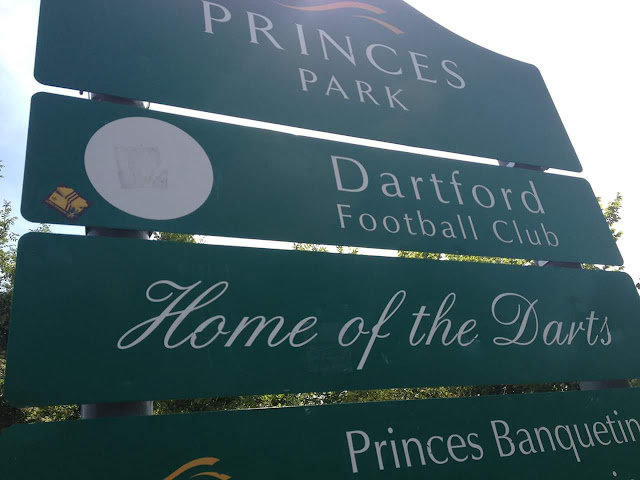 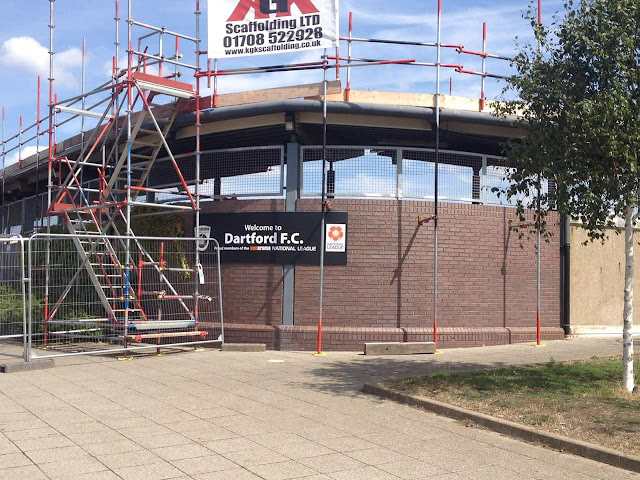 So the plan for today was to meet my dad at bus garage and then get the bus to Sutton station and then catch the train to Victoria and then another train which takes us to Dartford. The journey is fairly easy as Dartford is only around 20 miles away from London. Also Dartford is a place where you could probably catch a train to from the major train stations in London such as Liverpool Street, Victoria, Kings Cross and Waterloo. 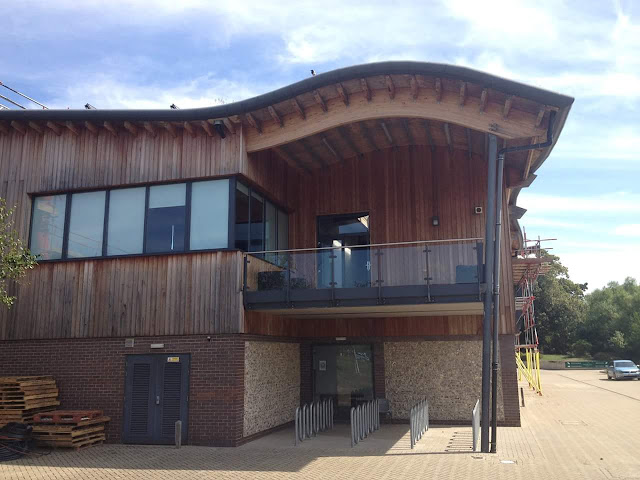 I woke up this morning full of excitement because the time had finally come when I was going to go to Dartford to watch Sutton. It was going to be one of the best away games for me because it was my first away game of the season. I knew that today was going to be a tough game which made me more excited. So I woke up this morning at 8am and had some breakfast and a shower. Then I had to do some school work that I had to do before school which took me to around 11am. Then I went and met my dad at the bus garage in Sutton where we started our journey to Dartford. We got on the bus at Sutton bus garage and then went to Sutton Station. 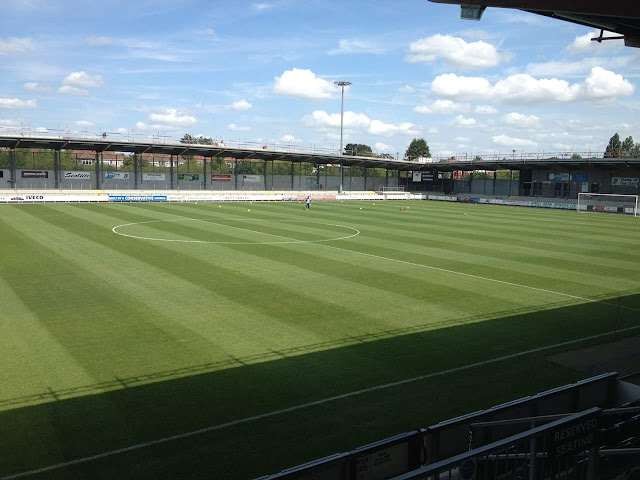 We then catched the 12pm train which took us to London Victoria and we arrived here at 12:27pm. We then had a 20 minute wait for the next train which will take us to Dartford. We got on this train and was leaving Victoria at 1:09pm and we had a short journey to Dartford and we was off the train at 1:58pm. We then had to wait for the bus to take us to Princes Park. The bus you get from Dartford Station to get to the ground is FastTrack B. Just ask for Princes Park. 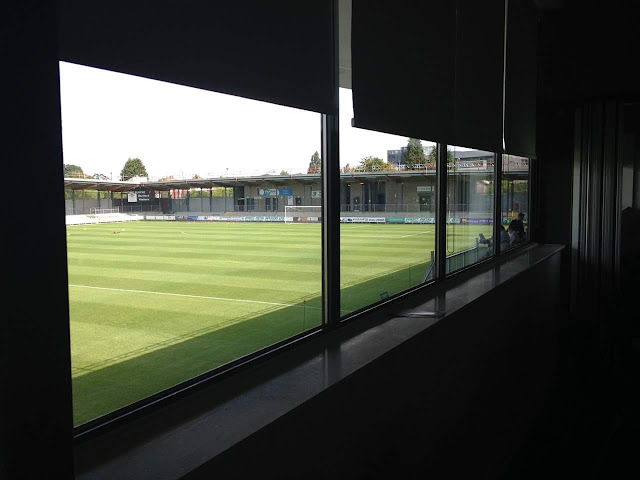 When we was approaching Princes Park I was very impressed because the stadium looked very professional and from the outside, the stadium looks like it should be in the football league preferably league two. When I finally walked inside I was in for a big surprise because it was bigger than the pictures and videos make the stadium look and as soon as I walked into the ground I immediately thought this was one of the best grounds in the Conference South. 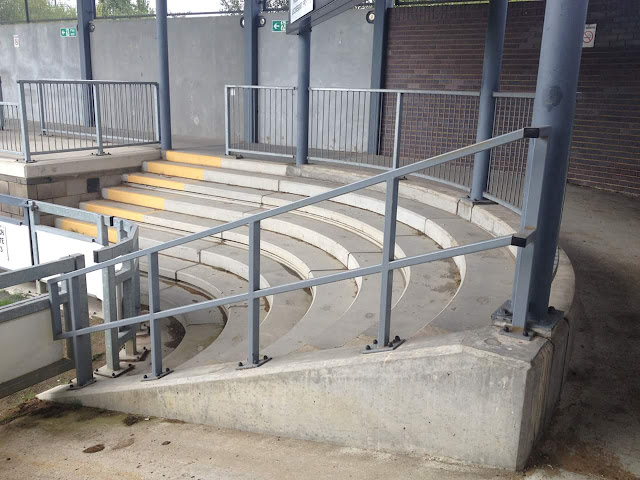 Princes Park was opened in 2006 and it has a capacity of 4,100 and there are 642 seats. On one side is the Main Stand. This stand is all seated and comprises just four rows, seating in total 642 spectators. It has the team dugouts at its front and a glassed area at the rear, which contains amongst other things the clubhouse bar. Like the rest of the stadium, the roof is situated quite high above the spectator area and has a slight oval angle to it. The other three sides of the stadium are small terraced areas, being around seven rows high. Opposite the Main Stand the Wooden Man sculpture stands on the terrace, keeping a watchful eye over proceedings. All four corners of the stadium are enclosed, although these areas are not used for spectators. The stadium is completed with a set of four floodlight pylons. (Description of Princes Park is sourced from Football Ground Guide). 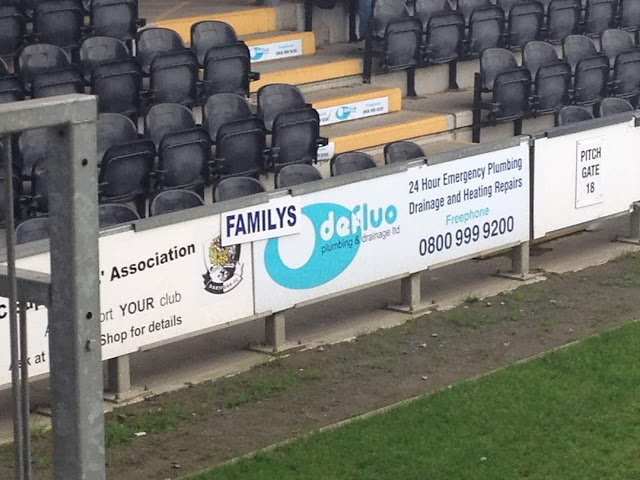 After being shocked from how great the ground is and the feeling of the ground, we saw my friend Johnnie and it was also his first time visiting Princes Park and the first thing he said to me when I walked up to him was "this is the best ground in the Conference South". Me and Johnnie then walked round the ground taking pictures and the more I walked round the ground, the more I seemed to love the ground. After taking some pictures, I then went to the tea bar and got a cheeseburger and a bottle of coke as they didnt have any hot chocolate ready. The cheeseburger tasted really nice and the bottle of coke was really cold and refreshing. Me, my dad and Johnnie then went and stood on the terrace alongside the pitch on the halfway line waiting to see which way Sutton would be kicking and we was kicking towards the Car Park End first, so me and Johnnie quickly walked round to the Car Park End and clipped up our flags. 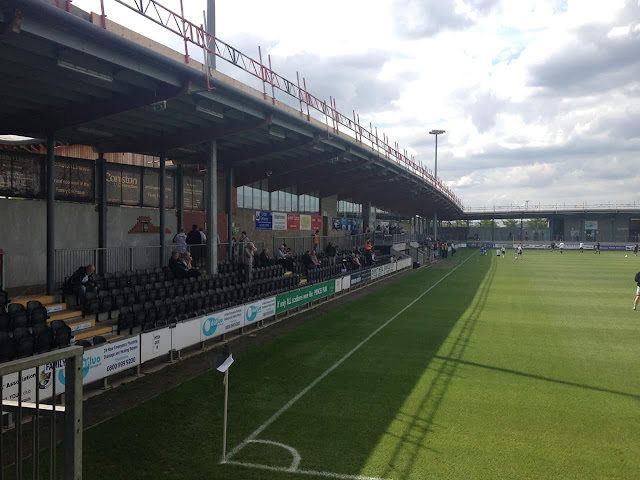 We finished clipping up our flags just after the game started and the game started well for Sutton as we were creating a lot of chances and should be in the lead early on in the game but just 14 minutes in, Dan Wisshart fouled Dartford player Ryan Hayes and Dartford were given a freekick. The freekick was sent in by Ryan Hayes and Tom Bradbrook was un-marked and headed the shot into the net to put Dartford 1-0 up. Sutton seemed to gain confidence from going 1-0 down as Sutton were creating many chances but our chance arrived in the 35th minute as Glen Southam's shot was saved and then Craig Dundas's shot was cleared and Micky Spillane scored a half volley into the back of the net to put Sutton back on level terms with Dartford. Both teams then had two chances to take the lead before half time but both teams didn't take their chances and the score remained 1-1 at half time. 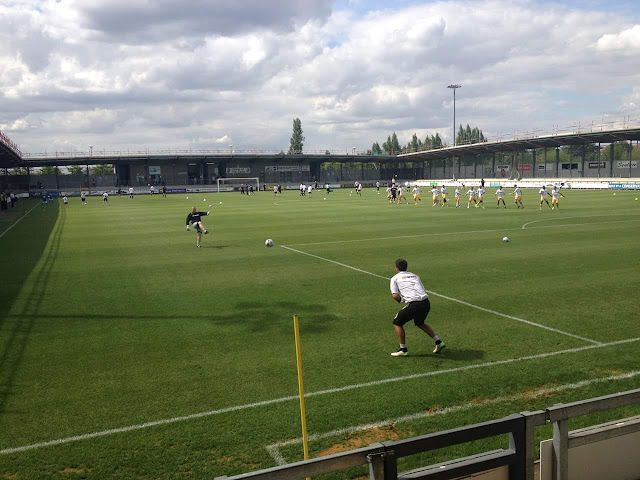 The first part of the first half seemed to be in Dartford's favour as they were creating a lot of chances and thankfully, Sutton goalkeeper Ross Worner was on-hand to keep Dartford at bay. Dartford eventually took the lead again in the 68th minute as Shaun Cooper passed the ball back to Ross Worner and Ross's shot hit Tom Bradbrook in the face and the deflection went in but the goal cost Tom Bradbrook an injury to the face. Dartford continued to dominate Sutton for the next 19 minutes but Sutton somehow managed to find a way to get back into the game as winger Shaquille Hippolyte-Patrick crossed the ball into the box and Jamie Collins headed the ball into the back of the net to make it 2-2 and Dartford had another few chances to take the lead but the game ended 2-2 and it was one of the most attracting and attacking games of football that I have ever seen. 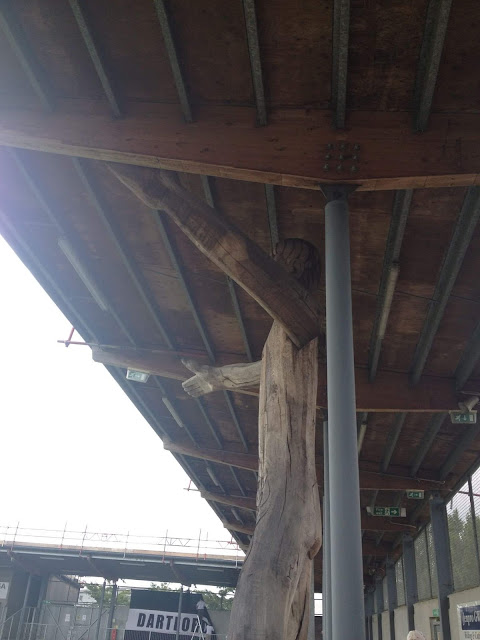 We clapped the Sutton players and then took the flags down and walked back to the bus stop and we both feelt very happy with a point because we were dominated by Dartford and a draw is a very good result. We got on the bus back to Dartford Station and we had to run for our train back to London Bridge but we eventually got back to London Bridge at 6:25pm and we then got the Underground to Morden and then I eventaully got home at 7:52pm feeling very tired but very happy. 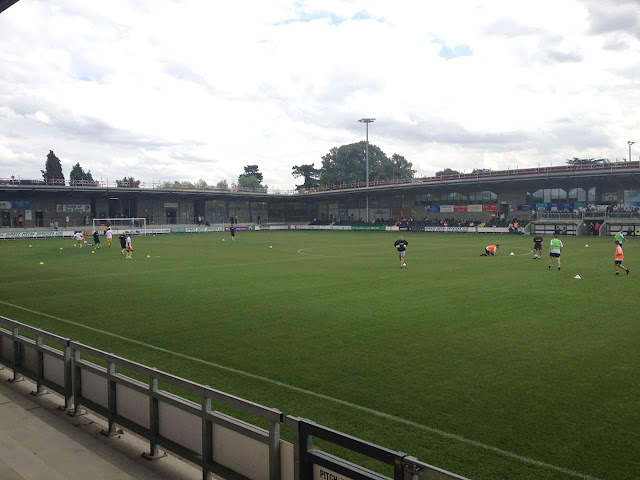 I really enjoyed my trip to Dartford and after my experience, I would defintely recommend visiting Princes Park as it is a lovely stadium and the food is really good, the fans are very friendly and you will experience some very good football and overall it is very good value for money. 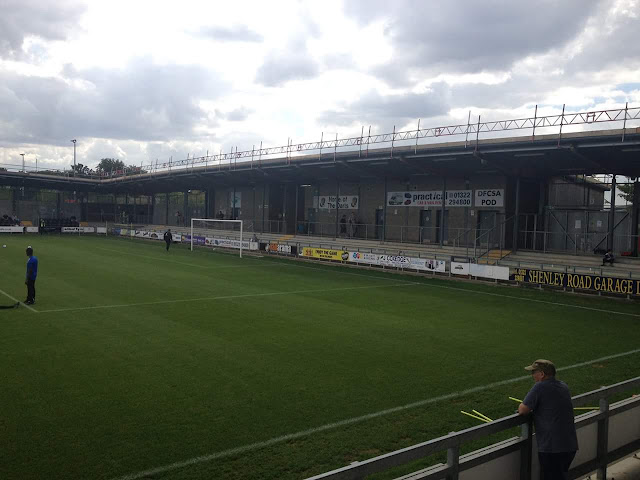 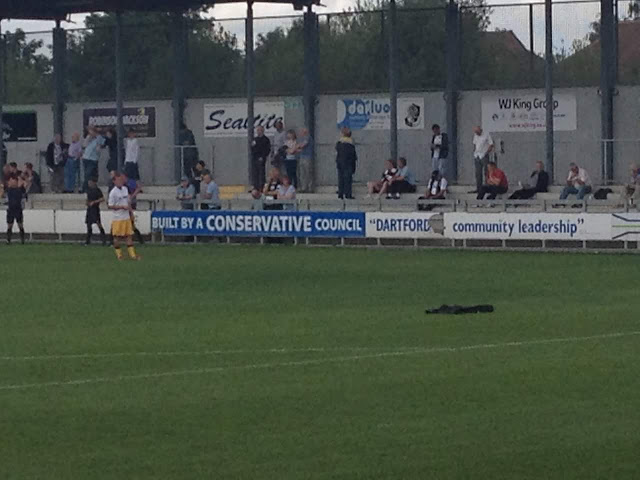 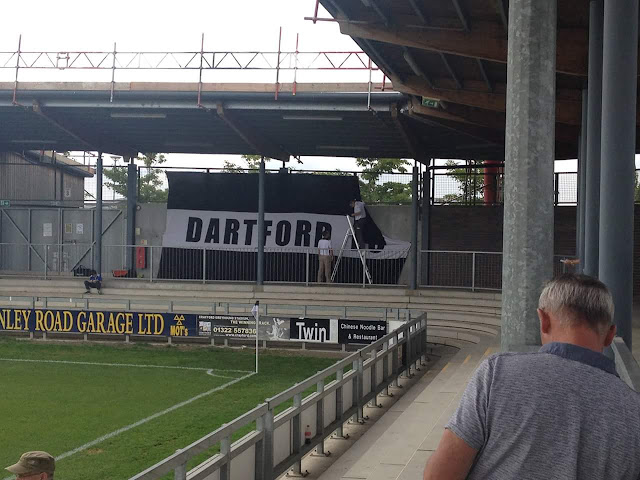 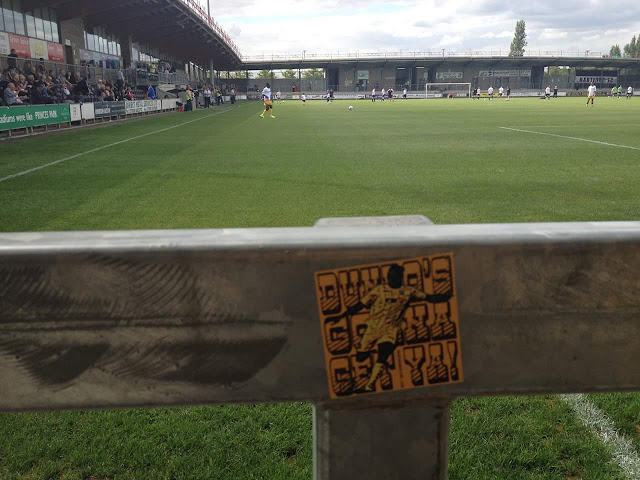 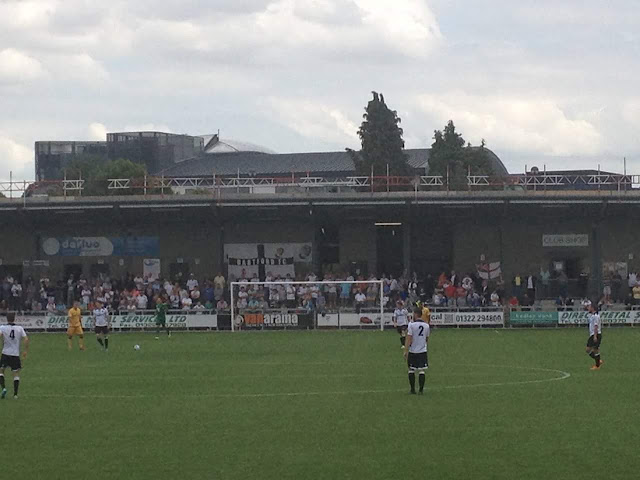 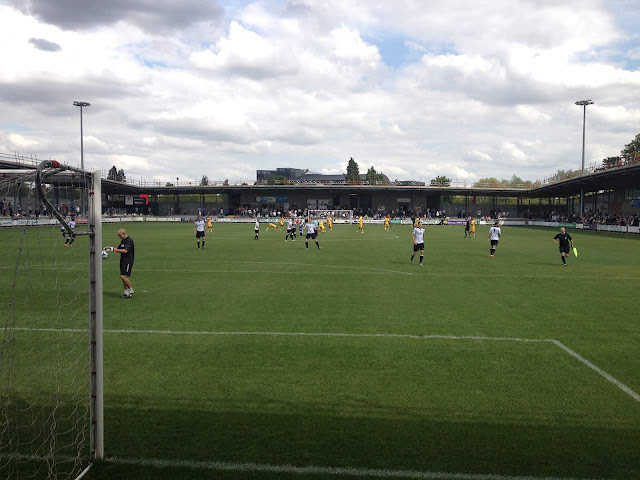 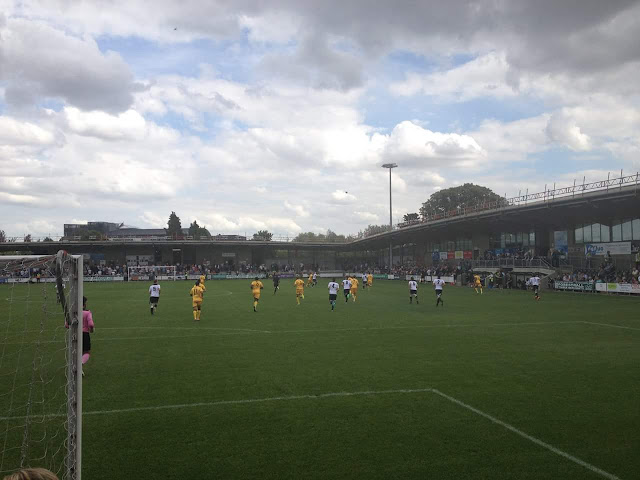 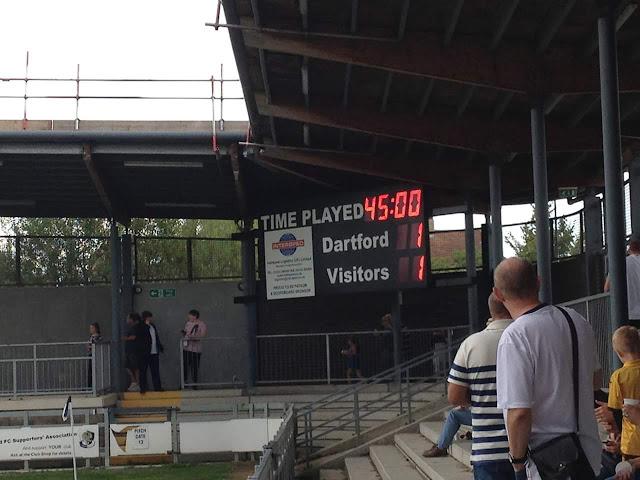