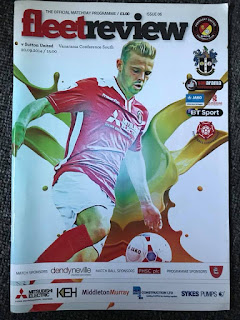 So after failing to go to Ebbsfleet last season as it was a mid-week game this fixture was one my hit list for this season and after only asking 3 days before the game, I was given permission to go to the game with my mates and one of my mates dad. Today was going to be a big challenge because Ebbsfleet have a lot of money and have spent a lot of money on their squad and have some very good players in their squad so they will be a hard team to beat. 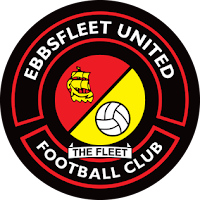 Today was also a special game because it was becoming close to my mate Johnnie`s birthday and me, himself, Johnnie`s dad, Gabriel, Josh and David were all going to Ebbsfleet to celebrate Johnnie`s birthday so today was kind of a early birthday treat for Johnnie. Personally I did not think we was going to win today but I would happily take a draw. The plans for today was to wake up at around 7am and my dad will pick me up and drop me off at Johnnie`s house where everyone will meet up and we will drive up to Northfleet and hopefully get to Stonebridge Road for around 1pm. 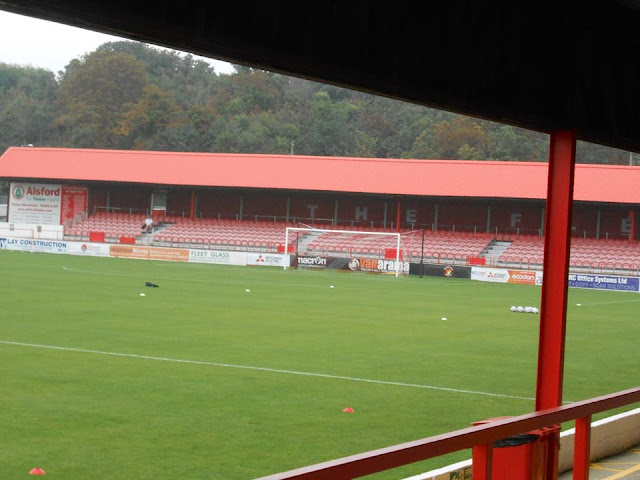 So I woke up this morning really excited because last season I really wanted to do Ebbsfleet away but I was unable to but this season I am allowed to go Ebbsfleet away so I knew that today I had to make up for missing this fixture last season. My dad arrived at my house at 10am and we left my house at 10:45am and I was dropped off at Johnnie`s at 11:10am. We then had a 40 minute wait before everyone finally arrived and we left Johnnie`s at 12pm and we was at the ground at 1pm. 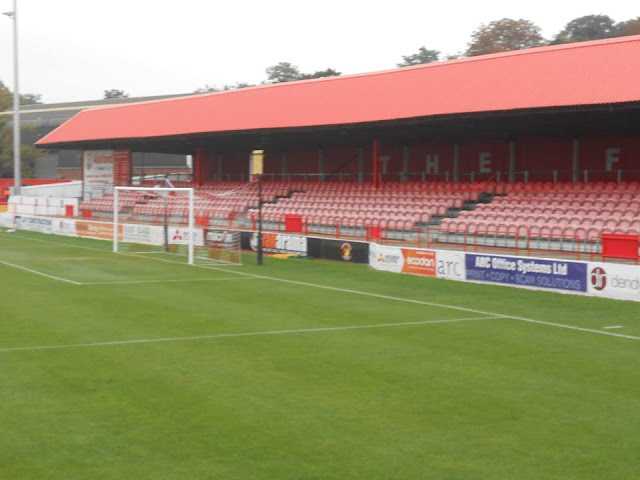 The journey down to Northfleet was quite relaxing as I was sitting in the front. The journey is mostly motorways so we did not get into much traffic and Northfleet is just around the corner from Dartford so if you are unsure how to get to Northfleet then follow the signs for Dartford and then Northfleet or Ebbsfleet International should be clearly signed posted from there. Once we arrived and parked, I quickly looked into the history of Ebbsfleet United. 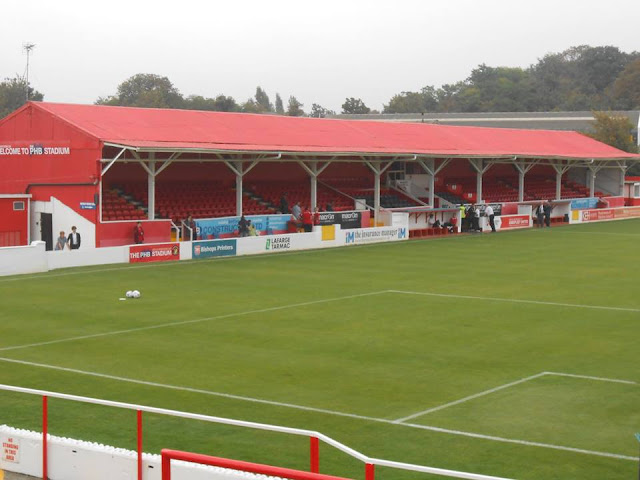 Ebbsfleet United were formed in 1946 but when the club was formed, the club was called Gravesend and Northfleet. The clubs nickname is `The Fleet` and they play in the colours of red and white. The currently play their home games at Stonebridge Road in Northfleet which has a capacity of 4,500 and there are apparently 500 seats. The club is owned by Dr Abdulla Al-Humaidi and the club currently play in the National League South but have spent times in the National League only a few seasons ago. In 1946, the teams of Gravesend United and Northfleet United merged with each other to form Gravesend and Northfleet but in 2007, the club name was changed to Ebbsfleet United. The local station Ebbsfleet International is very close to the ground which is probably one of the reasons why the club changed its name. In 2008, Ebbsfleet won the FA Trophy after beating Torquay United 1-0 at Wembley. In November 2007, MyFootballClub took over Ebbsfleet and funded around £700,000 to put into the club. Then Kuwaiti (KEH Sports LTD) took over the club in 2013. 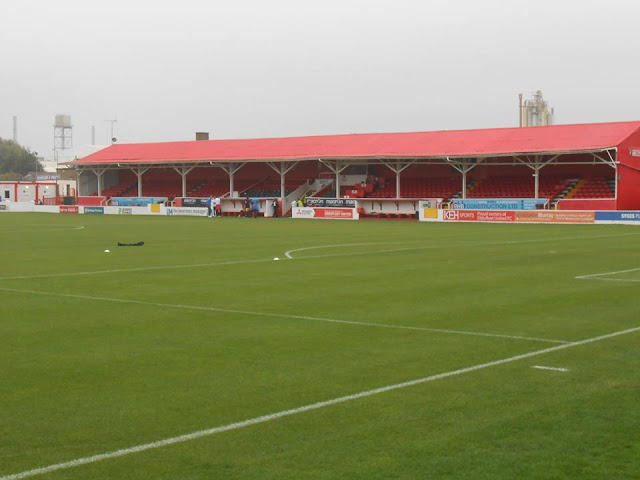 Now when we paid to get in and walked in the stadium, I was very surprised because the stands look bigger than what you see in the photos and highlights online which made me feel excited because the ground was bigger than I was expecting and I really like visiting large stadiums especially in non league as most of the stadiums in non league football are small. We then started to walk round the stadium and took some pictures and we all really liked the stadium and we could all feel the atmosphere inside the stadium, even though we were the only ones inside the stadium. 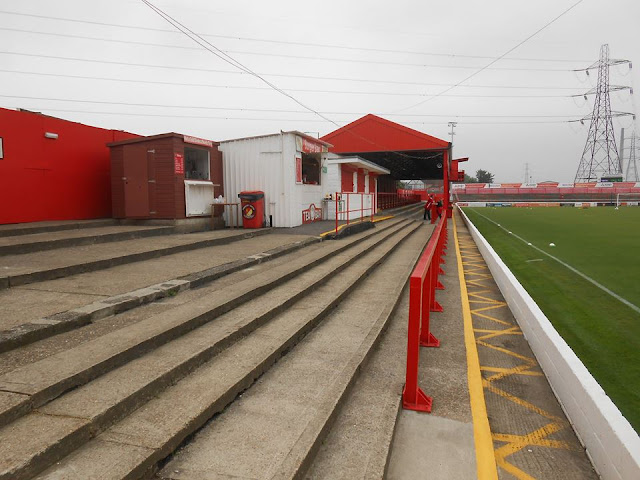 The main stand is opposite the side where you enter the ground. The main stand holds around 200/250 seats in red to represent Ebbsfleet`s main colours. Then opposite the main stand is the Liam Daish Stand which is a covered terrace situated on the halfway point of the pitch and can probably hold around 300. Then behind one of the goals is the Plough End which was previously a covered terrace but now there are seats there. The back of the stand has the words `The Fleet` written on the wall. There are around 200-250 seats also in red at the Plough End. Then behind the other goal is an uncovered terrace called the Swanscombe End. This is given to the away fans if segregation is needed. This end can hold around 1,000 spectators. 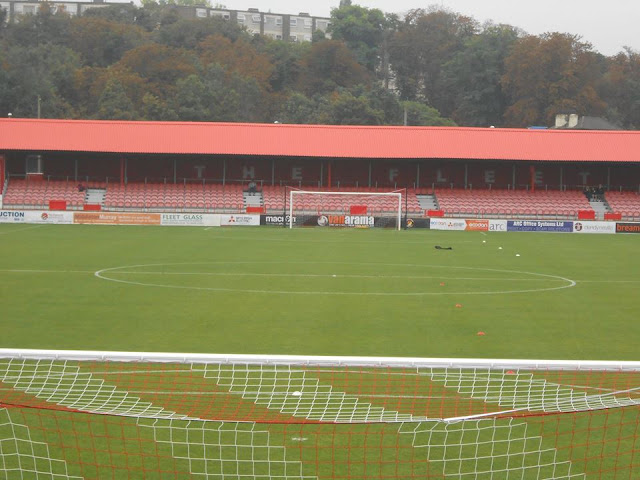 We then walked round to a small open terrace beside the main seated stand and tied our flags up as we would be standing here for the first half. After putting our flags up, I then headed to the tea hut and purchased a cheeseburger which had been re-heated and cost £4.50 which is very expensive. The burger was really tasty which was a surprise because I am generally not really keen on heated burgers but it was so tasty, I went and got another one. 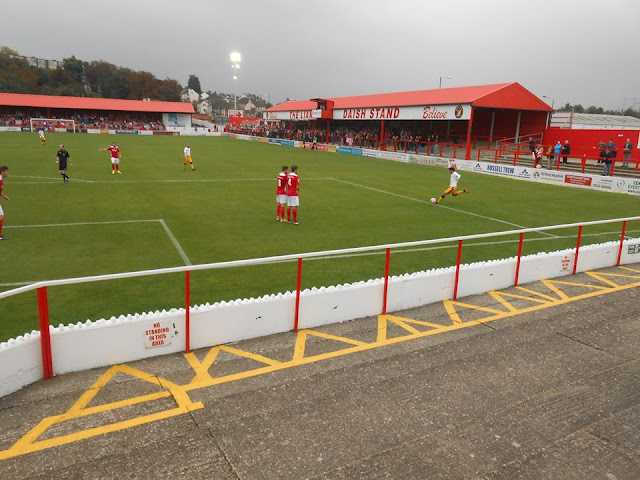 Our friend Gabriel has brought his clarinet with him which was a bit wierd but it allowed him to play some classic tunes such as pigbag and this allowed me and the others to sing along to the tunes that we all love and it also got up more in the mood for football and more excited. 3pm finally arrived and the teams emerged from the tunnel and a loud roar came from both sets of fans and by the time both teams had shaken hands, around 30 Sutton fans had joined us on the open terrace. The game started and the Sutton loyal started chanting and we were really loud today and we hoped that it would edge our team onto a solid victory but Ebbsfleet were dominating us for the majority of the first 20 minutes as they had the majority of possession and they were creating a lot of chances and Ebbsfleet broke free as Anthony Cook put the ball past Alan Julian to put Ebbsfleet 1-0 up. 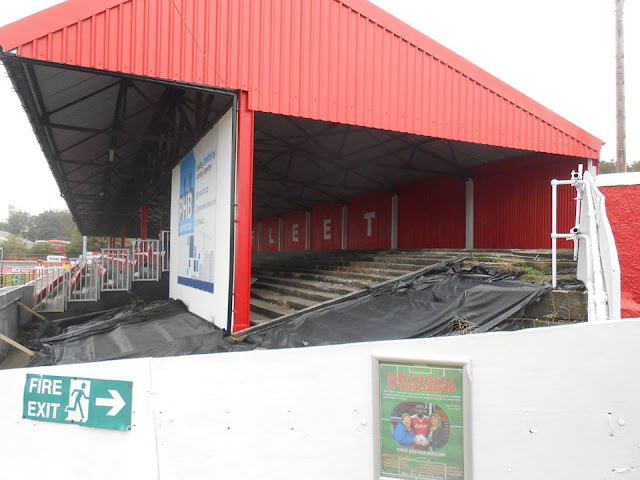 Sutton seemed to lose all their confidence after going 1-0 down and this clearly showed as Ebbsfleet scored minutes later in 26th minute by Billy Bricknell and this made us all feel annoyed as we had been really excited for the game and our spirits had been massively reduced. We continued to support our team and still chanted and there was no noise from the Ebbsfleet fans even though they were 2-0 up. Sutton had the odd few chances in the first half but the score remained 2-0 at half time. We took the flags down and then walked round to the open terrace behind the other goal and put our flags back up. 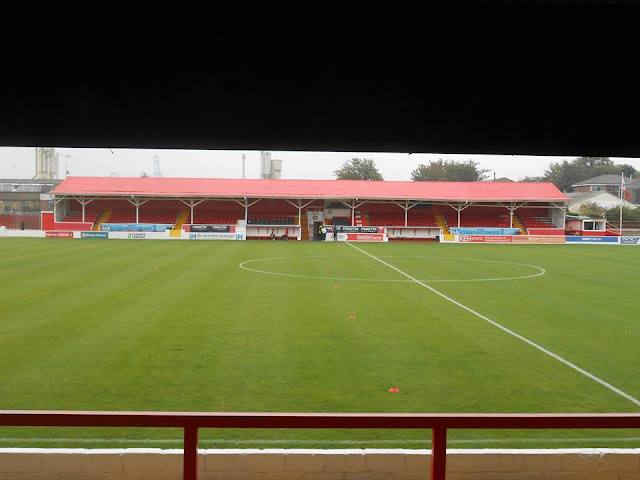 The second half started and everyone was still quite annoyed about our first half performance but we knew that the next 45 minutes could see us back into the game and possibly get something from the game but we were very wrong as the team still looked unsettled from going 2-0 down and this caused our defense to be broken and we conceeded again via Billy Bricknell in the 52nd minute and we just felt like the whole day was as low as it could get. 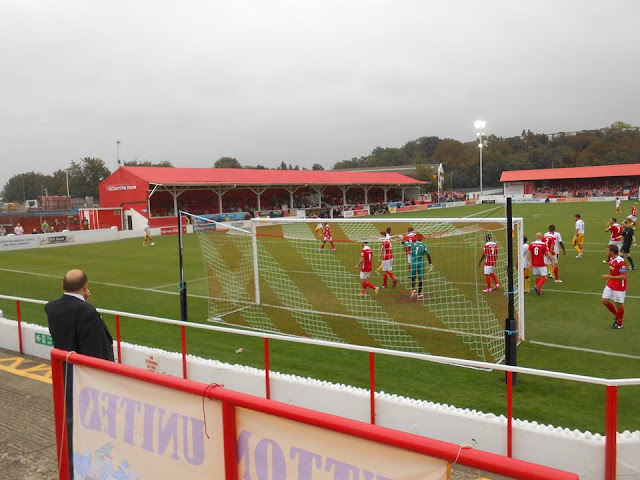 After going 3-0 down, the atmosphere was probably the worst that I have ever experienced as we had no chants and everyone was really annoyed but we continued to support the team throughout the game and Sutton did have a few chances to grab a goal and get back into the game and Ebbsfleet also had a few more chances but the game ended 3-0 and we all felt very low. We took the flags down and clapped the players and then walked round to the car feeling very upset but we had experienced a good day up until the we started losing. 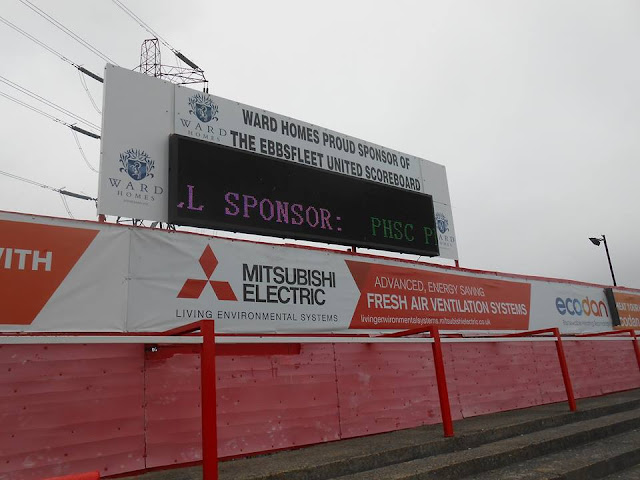 The journey back home was very quiet as we was all annoyed and we all just wanted to get home. The journey back was very quick as there wasnt a lot of traffic and we managed to beat the rush hour. We got back to Johnnies at 6:10pm and I said goodbye to everyone and I eventually got back home at 6:35pm feeling still annoyed but excited for the next game of the season. 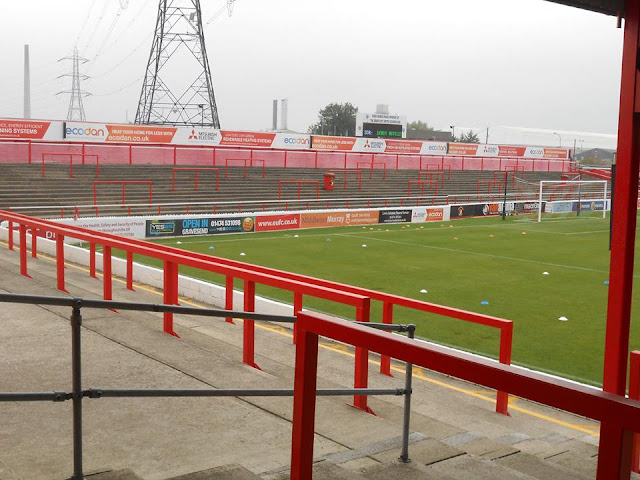 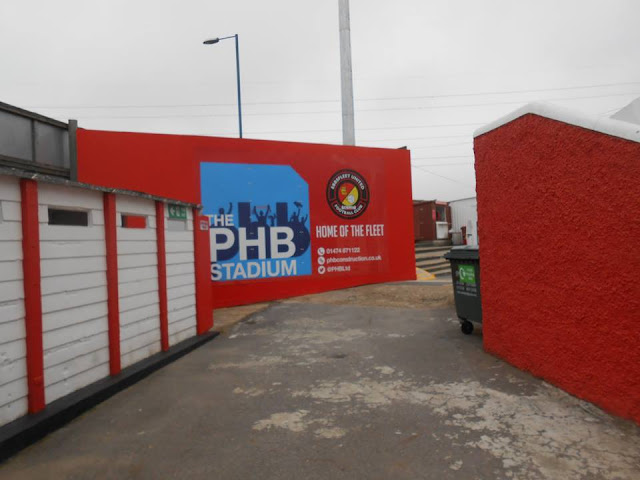 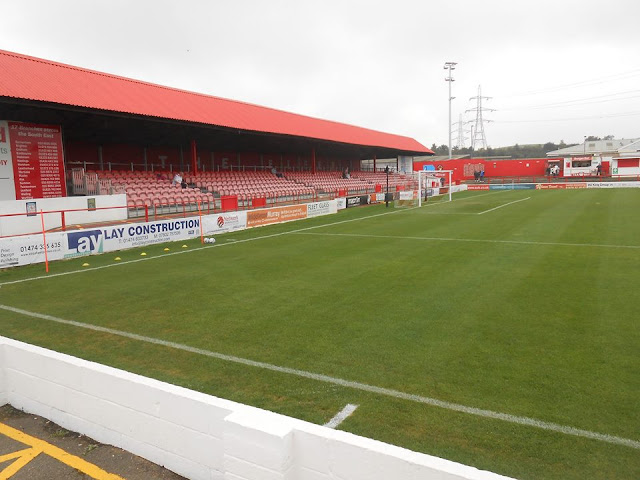 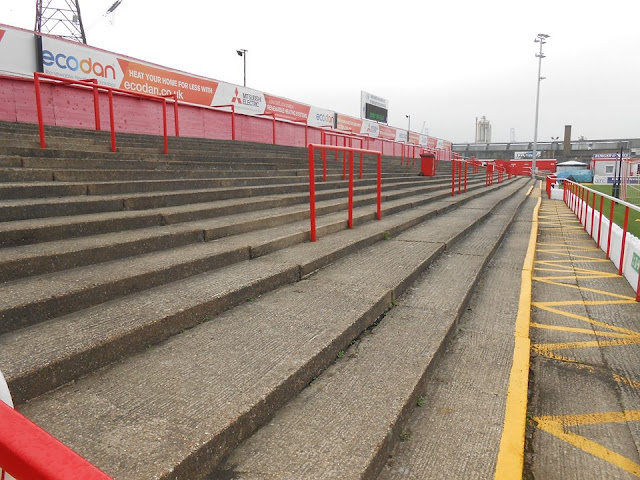 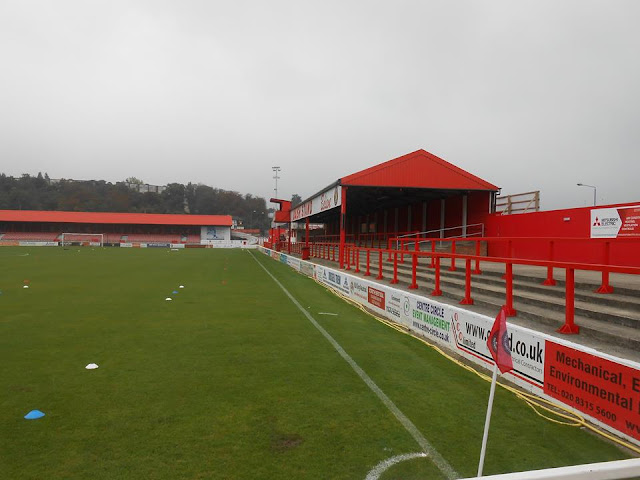 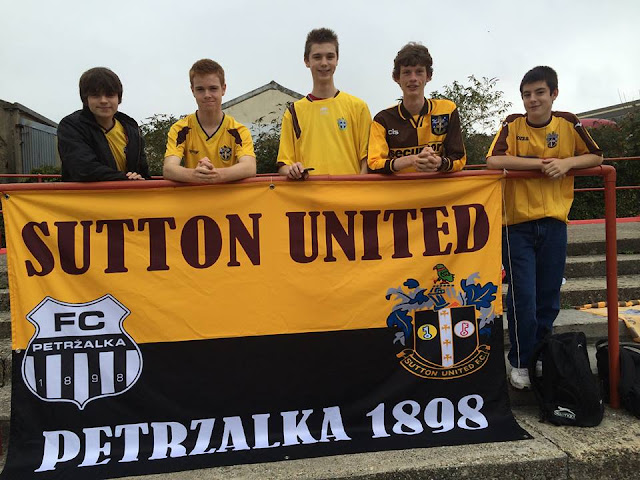 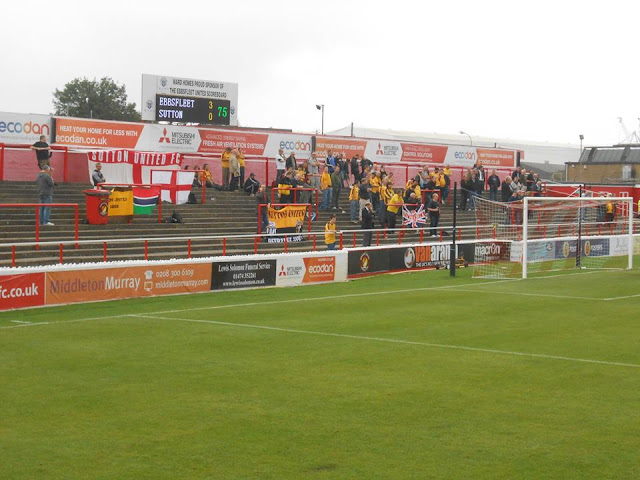