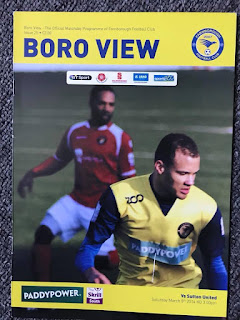 It has been two and a half months since my first Sutton away which was away to Staines Town back in December and I was eager to try and get another away game under my belt as the season is starting to clause to an end as we are now in March and there are not many games left. This weekend was a game that we had been planning on going to for at least two months, this game is Farnborough away.

So Sutton were climbing up the league table rapidly this season and are starting to look like they make catch up with league leaders Eastleigh so it is vital that Sutton pick up the three points today to try and catch up with Eastleigh. Sutton looks like they are consolidating themselves in the play-off places and could possible stretch to winning the league but for this to happen, Eastleigh would need to go on a bad run of form and Sutton would need to pick up some good form over the next couple of months. 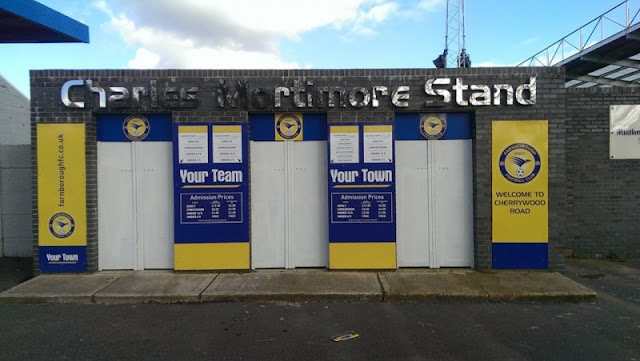 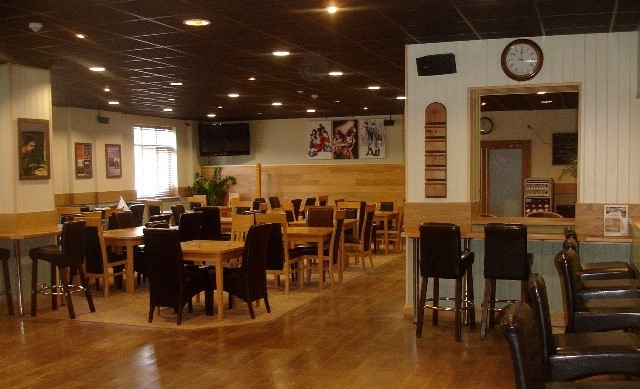 So I woke up this morning with the football feeling inside my body as I had been waiting to do Farnborough away for two months now and the day had finally arrived when I was actually going to go there for real. Over the past few weeks, I have been watching highlights of Farnborough and watching previous highlights of when Sutton have played against Farnborough to get me pumped for todays game and now the day has finally arrived I am more excited than I have ever been for an away game, I was even more excited than Staines away which was my first away game which was back in December. 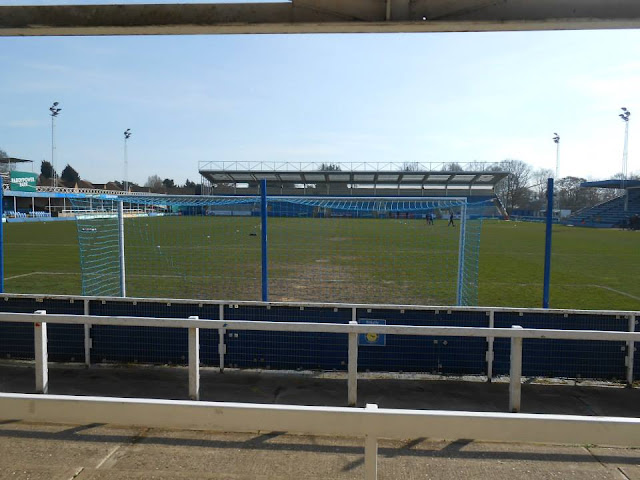 So we finally left my house full of energy and with a full tank of petrol in the car at 12pm and it was only a 50 minute drive to Farnborough as it is only just past Aldershot and we drove down what seemed to be an empty A3 which was weird for a Saturday afternoon but the roads were clear all the way to Farnborough. Whilst driving through Farnborough we passed Johnnie and Gabriel walking to the ground and I shouted `Johnnie` out the window as we drove past them. 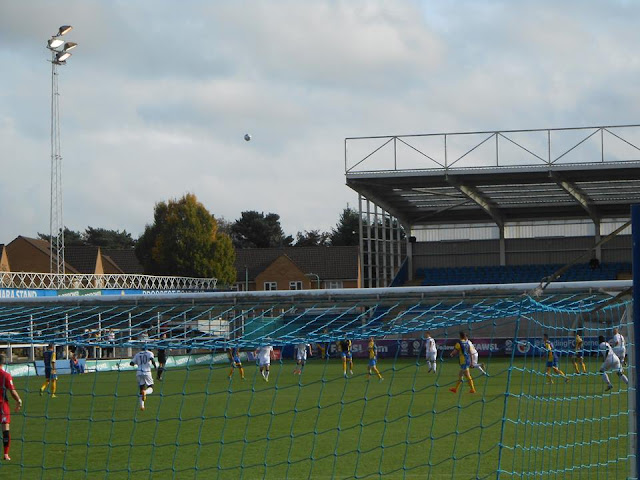 We parked up the car just outside the stadium and looked up at the big stadium. As we got to the ground early we decided to go into the bar and watch the early kick off in the premier league and Johnnie and Gabriel soon joined us 15 minutes later. There was also quite a few of the Sutton squad in the bar having a game of pool so we was able to have a quick chat to them before the game. Then at around 2pm we headed out for the stadium to get a glimpse of Cherrywood Road. 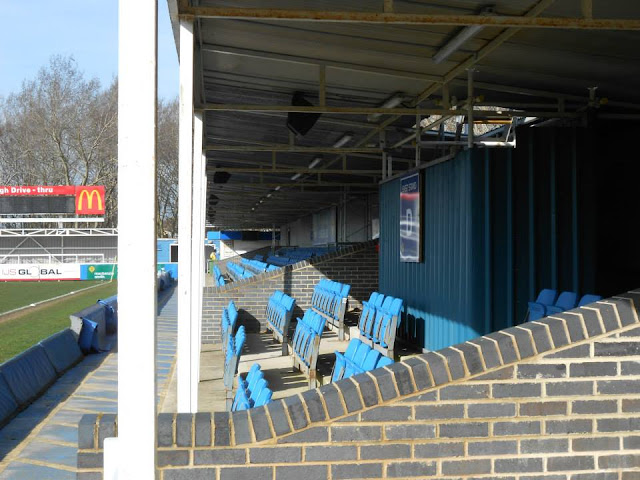 Now when I walked inside Cherrywood Road I was amazed at how big the stadium is for the level of the Conference South because this stadium could easily pass its way into the Football League. Cherrywood Road is one of my favourite non-league stadiums because it has the potential to be in the football league but it still has a non-league feeling to the ground which is partly due to Farnborough FC are having around an average attendance of around 400. 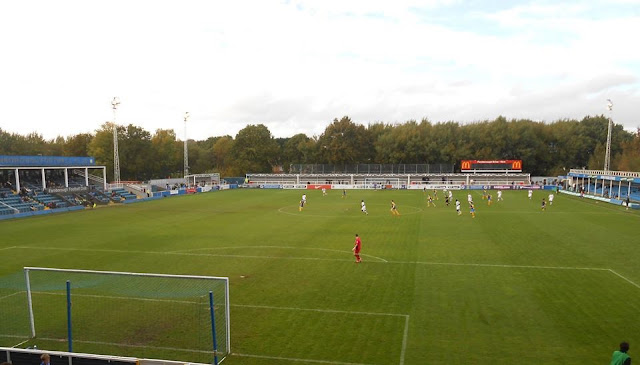 Cherrywood Road is a large stadium for the level of football that Farnborough play at and it is quite unique. On one side is the strange looking Charles Mortimore Stand (Main) Stand. It looks a little odd as one side of it looks different to the other side, as it was at some point it was extended. The stand comprises of covered seating (to the rear), some of which has been elevated above pitch level. There are a few supporting pillars along the front of the older side of the stand, whilst the newer side is obstruction free. The front portion of the stand contains uncovered seating and has the team dugouts integrated into it. The total length of the stand is around half the length of the pitch and hence that are small terraced areas to either side. At the other end of the ground is the Moor Road End, which is a terrace, with cover at the rear and open terrace to its front. If segregation is in place then this is where away fans are housed. Around 1,000 fans can be accommodated in this area. On one side is a  is completely open, whilst the Prospect Road End is partly covered (behind the goal). On one side of the roof is a fair sized electric scoreboard. The ground has eight floodlight pylons, four of which run down each side. 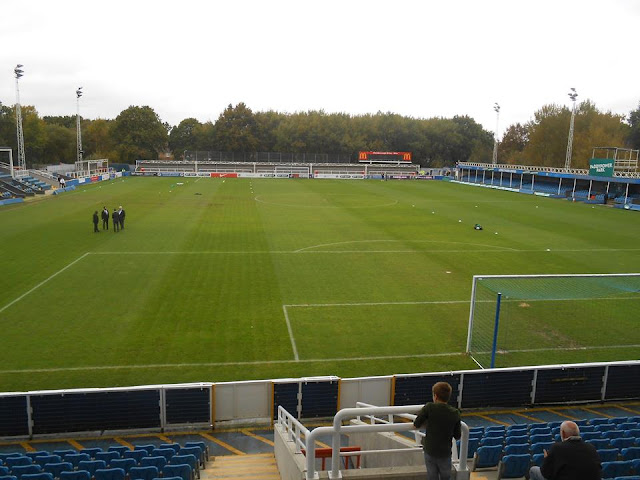 Opposite is a small but long in width covered stand, there are a number of supporting pillars running along the front of it. Originally this was a covered terrace, but was subsequently made all seated but now at Prospect Road End corner of this stand, there is now terracing. Apparently it does not have an official name, although it does sit on the East side of the ground. One fan suggested to me that it was nicknamed the S.W.A.N Stand. Apparently S.W.A.N stands for Stand Without A Name. At one end is the latest addition to the stadium, the Prospect Road End. Opened in 2011, this covered all seated stand has a capacity of 1,300. Comprising of 13 rows, it is quite a smart looking stand, with its high back wall and roof. There is not a supporting pillar in sight, meaning that spectators can enjoy a great view of the playing area. It also incorporates facilities for disabled supporters. (Description of Cherrywood Road is sourced from Football Ground Guide). 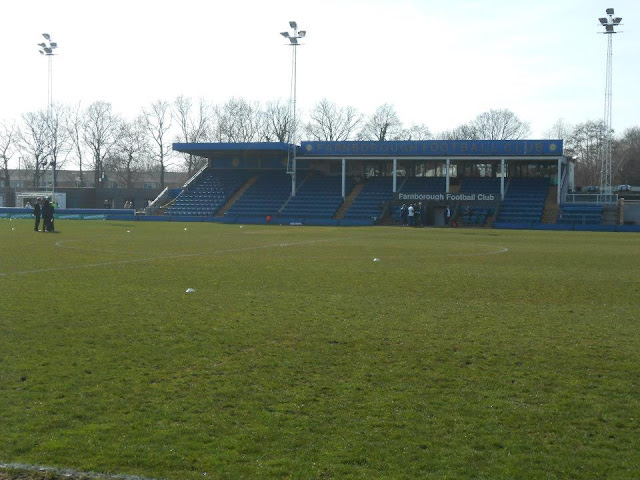 Before the game started I went round to the burger van and purchased a cheeseburger and chips which tasted really good and made me want another burger but we did not have a lot of money left so I just had to resist by just having the one I already ate. We then started walking around the ground to grab some pictures. The Prospect Road End was not open to fans yet as it is not fully finished but the steward said I could go in the stand for 5 minutes before the game to grab some pictures but this was a very very rare exception and this made me feel very privelleged. 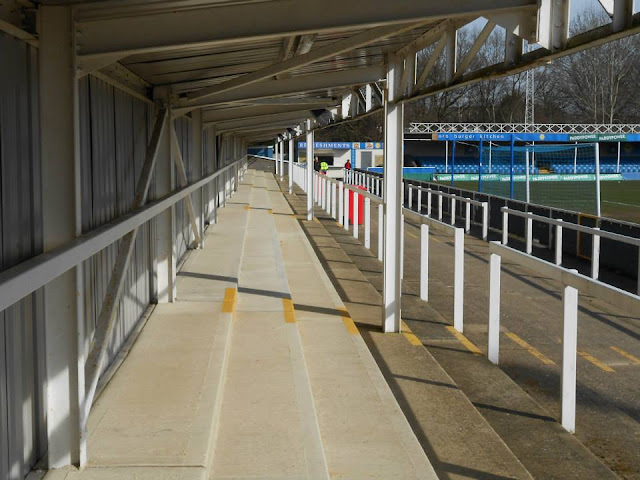 We then walked round to the Moor Road End as Sutton were kicking this way for the first half and we decided to stand right behind the goal as that is where most of the Sutton fans were already standing. When I was watching the game, it felt really wierd as Cherrywood Road is such a large stadium for the Conference South and it made us feel like we were playing in the Conference Premier. The first half was full of chances as Farnborough looked like they were going to score but Sutton goalkeeper Jason Brown was on hand to keept Farnborough at bay. 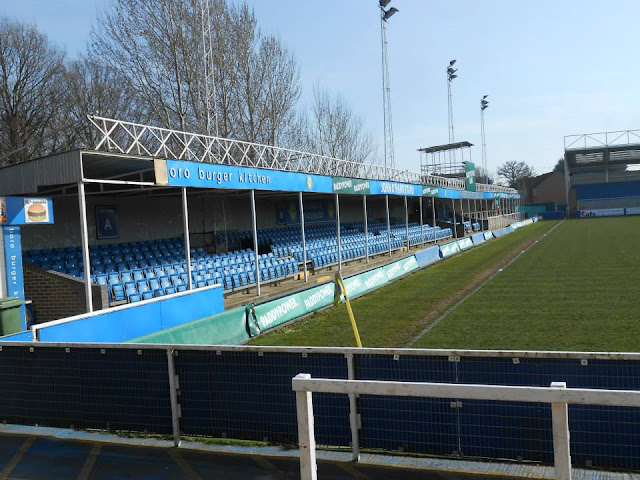 Sutton eventually took the lead in the 34th minute via midfielder Damien Scannell and me and Johnnie went wild and couldn't stop celebrating. Sutton then was punished as Sutton defender Charlie Clough was sent off and Sutton had to play the rest of the game with 10 men and we all felt like our efforts to go 1-0 up would be demolished but we were wrong as Sutton seemed to get stronger as Sutton scored again in the 41st minute via fans favoruite Jamie Taylor and the game remained 2-0 at half time. 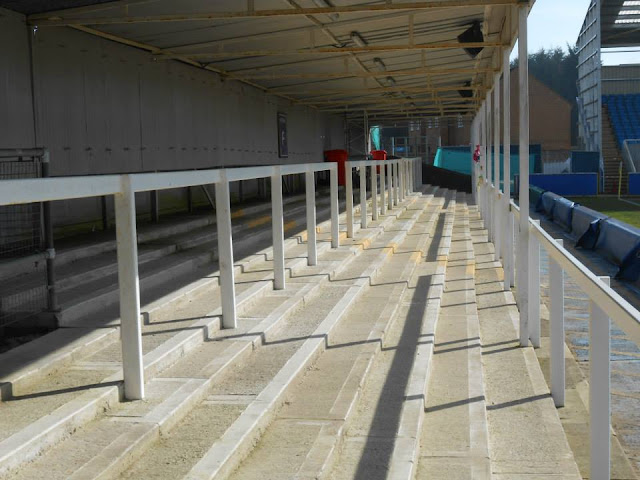 We then walked round to the other side of the ground and as the Prospect Road End seated stand was not open, we all decided to go in the terracing area of the East Stand which is alongside the pitch. It seemed like all of the Sutton fans had decided to stand here as there were around 40 Sutton fans all together. The second half started and Sutton had a good few chances to extend their lead but the Farnborough keeper was on hand to keep Farnborough in the game. The atmosphere from the Sutton fans was excellent as we were all chanting together and we were really loud. Farnborough did get a goal back in the 90th minute but Sutton kept possesion for the last few minutes and the game finished 2-1 to Sutton. 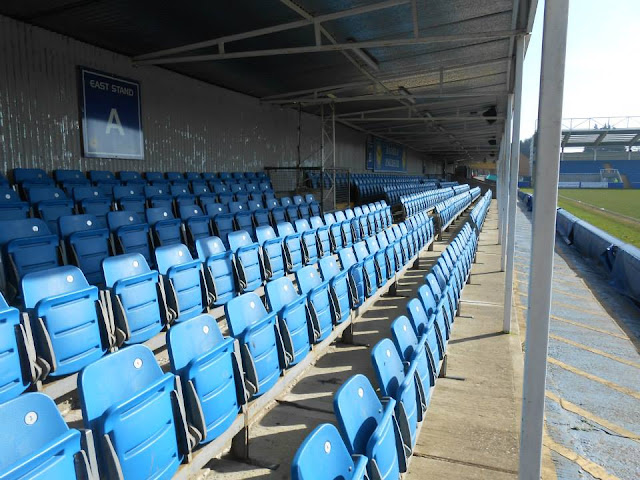 After the game had finished, we all clapped the players off for their excellent performance and had kept us in the title race. I then said goodbye to Johnnie and Gabriel and me and my dad walked back to the car and we both felt very happy because we won the game, we had seen a good game of football and we had visited another stadium that we wanted to visit for quite a while. 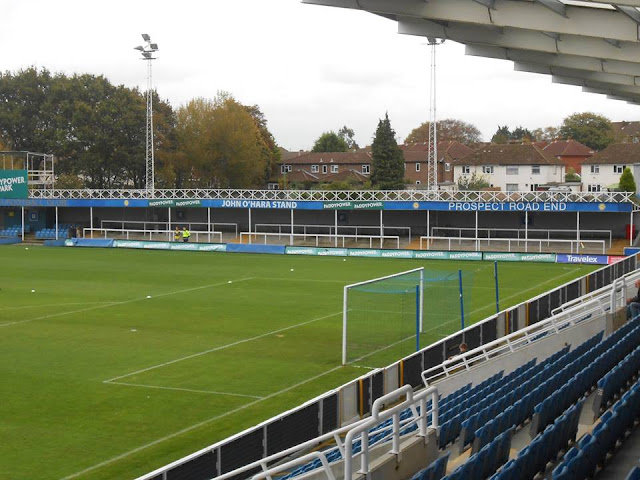 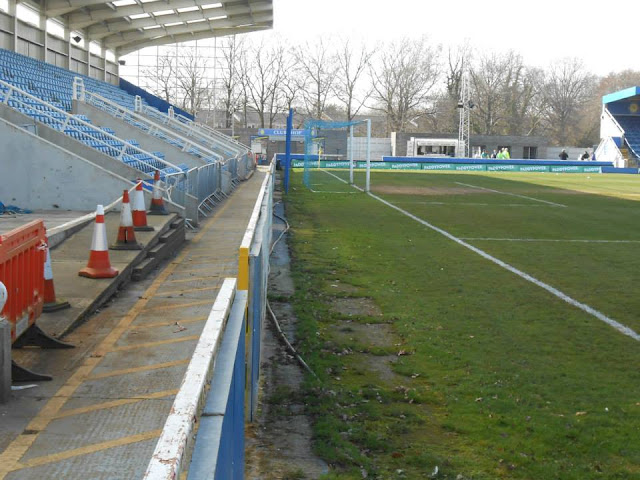 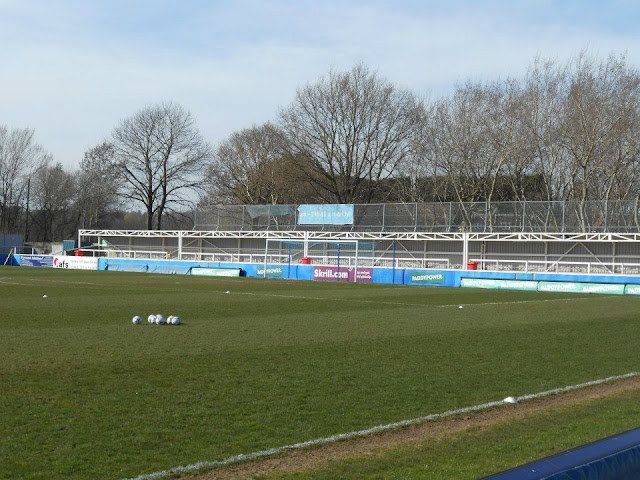 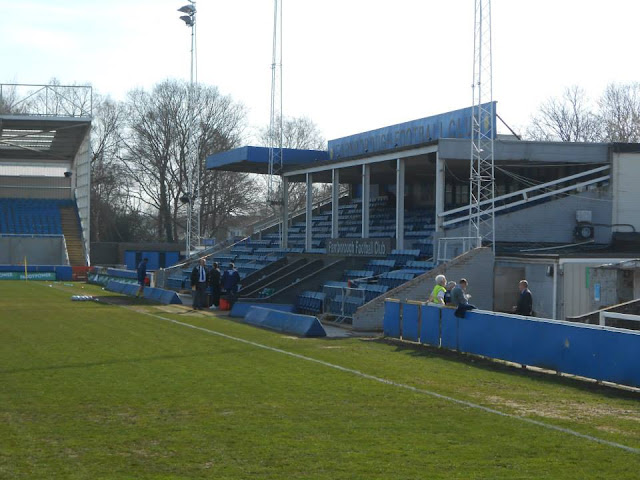 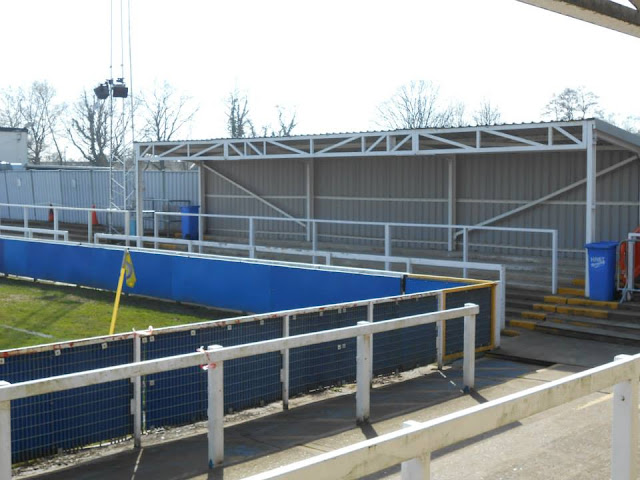 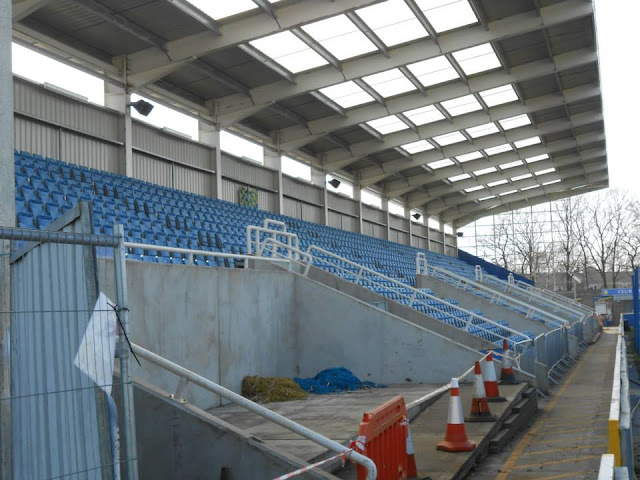 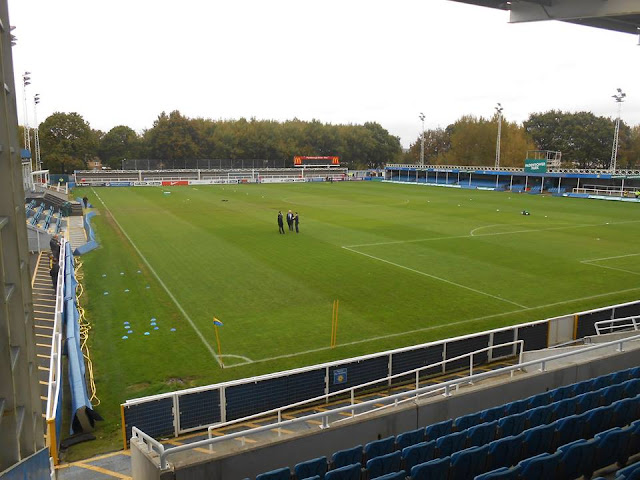 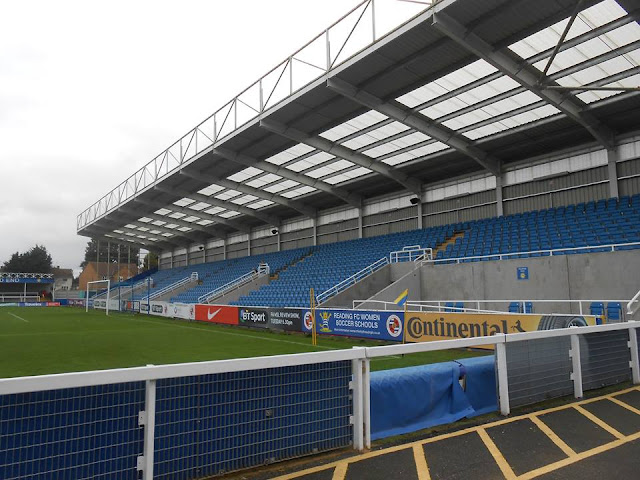 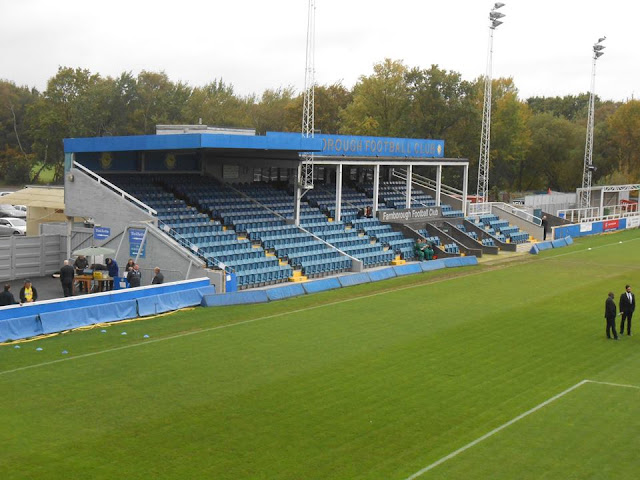