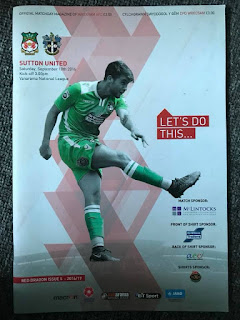 So it is time to finally go abroad to watch Sutton, well I say abroad, well it is and Wales is abroad for us England fans. Today is going to be tough game because both teams are sitting in mid-table and it is anyone's game to get the three points. It will be tough but hopefully Sutton can pull through the pressure of being away and get at least a point. 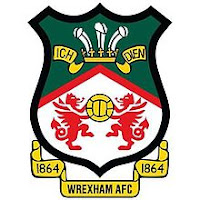 So today I am going to Wrexham which is in North Wales to watch the mighty Sutton take on ex-football league side Wrexham. Normally I would go to away games by train but today we was going on the supporters coach for a change to see what it is like and because there want any trains on the day and it is very far to drive, so the supporters coach seemed the best option. 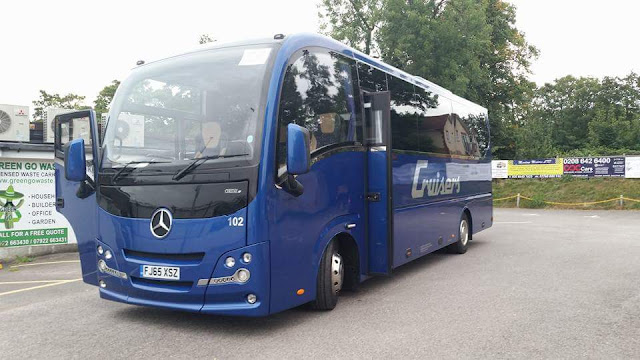 So the plan for today was to get up at around 5:40am and have a McDonalds breakfast before heading to Gander Green Lane at around 7am to get onto the supporters coach which will take us to Wrexham. The coach was planning on leaving at 8am which meant we would be able to talk to the other fans before getting on the coach. 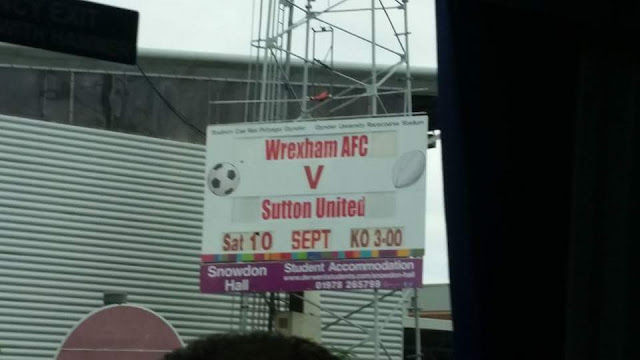 Wrexham A.F.C. were founded in 1864 and are one of Wales biggest clubs as there are not that many big clubs in Wales. The only big clubs in Wales are Swansea City, Cardiff City, Wrexham, The New Saints and Airbus UK Broughton. Wrexham`s nickname is `The Dragons`, `The Robins`, `The Reds` and `The Town`. The currently play their home games at the Racecourse Ground in Wrexham which has a capacity of 15,550 and is one of the biggest grounds in non-league. Wrexham have played in the football league but were relegated in the 2007/08 season after being in the football league for 87 years and now they find themselves playing in the National League only one promotion away from returning to the football league. The club won the Third Division in the 1977/78 season and they have won the Welsh Cup 23 times. They won the Football League Trophy in 2005 and they won the FA Trophy in 2013. Also since 2011, Wrexham has been a fan based owned club. 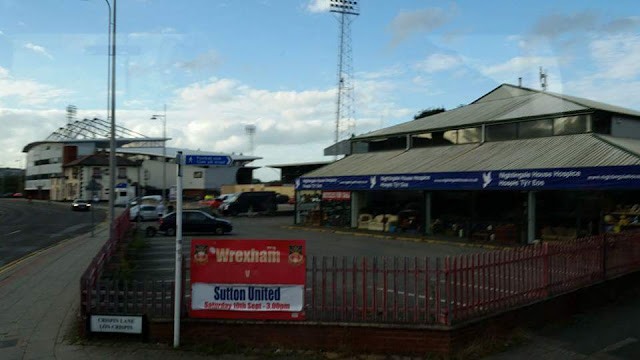 So I woke up this morning at 5:30am which was a bit earlier than I was hoping but because we were so excited for the game, we decided to just get up now instead of going back to bed for 10 minutes. We got dressed and headed out for the car at 6am. We then headed to McDonalds which is around the corner from Gander Green Lane to have breakfast. I had two sausage and egg McMuffins. We then headed to the ground and parked up at 6:50am and we went to a corner shop and purchased some snacks that we forgot to get. The coach arrived in the car park at 7:30am and we had a chat to the coach driver and we waited for everyone else to arrive. The last person arrived at 8am and we was left Gander Green Lane with lots of positivity at 8:05am. 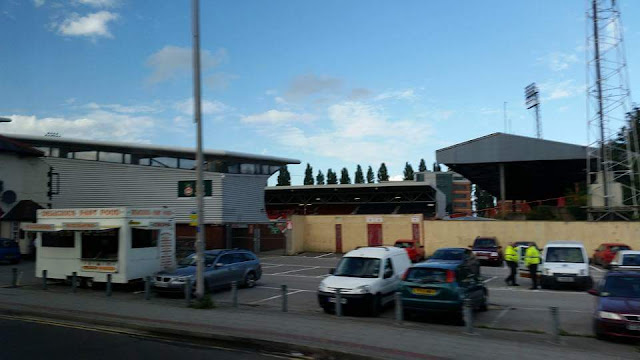 On the way to the ground we was talking about football mainly but for the first 20 minutes of the journey I was typing up some of my college work and played a little bit of football manager but my laptop battery died. On the way to the ground we did some ground spotting and we passed Aston Villa (Villa Park), Shrewsbury Town (New Meadow) and we also passed Walsall (Bescot Stadium) after passing through Birmingham. I managed to get some bleak pictures which I will put in this blog nearer the end. 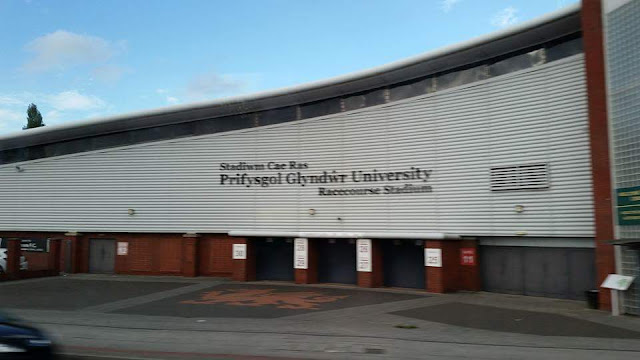 On the way we stopped at Oxford Services which our fellow Sutton supporter Daniel did not like because he has stopped here so many times in the past month after going to Chester and Gateshead and he had enough of it. We also had to stop at Telford Services on the way. We finally did arrive in Wrexham just after 2pm and the stadium stands out amontst the town. We parked up in the stadium car park and then put my laptop bag in the boot of the coach and we queued to get our pre-paid tickets. 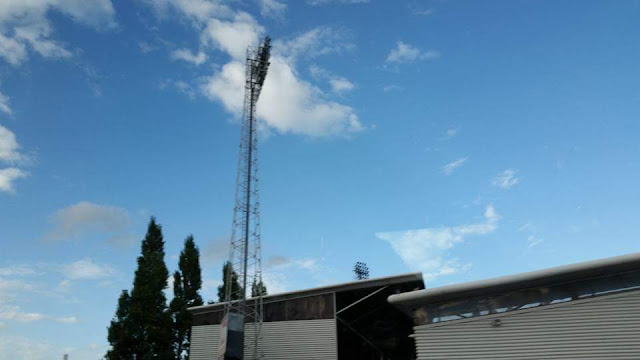 The queue for collecting our pre-booked tickets was around a 20 minute wait but after only waiting for 5 minutes a man came round with some envelops for people with pre-booked tickets and luckily enough our tickets were in there which meant we was able to skip the queue. We also got a programme before heading to the stadium. 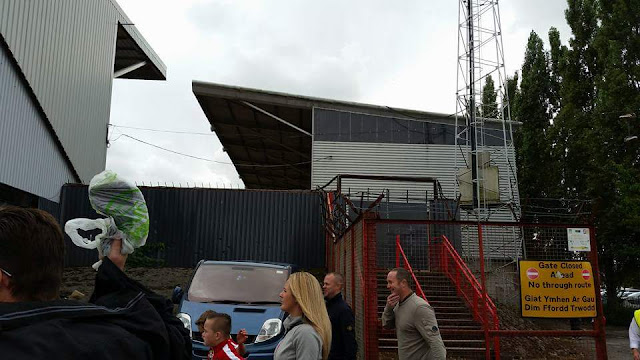 When I finally walked up the stairs into the stadium and got my first glimpse of the stadium I was quite shocked because the pictures that are online make the ground look a lot bigger and this made me a but disappointed but my first impressions on the Racecourse Ground is it is an amazing stadium and should not be in non league, it should be in league one. The stadium is 75% seating and 25% standing but they do not use the terrace anymore as I believe it has been classed as unsafe. 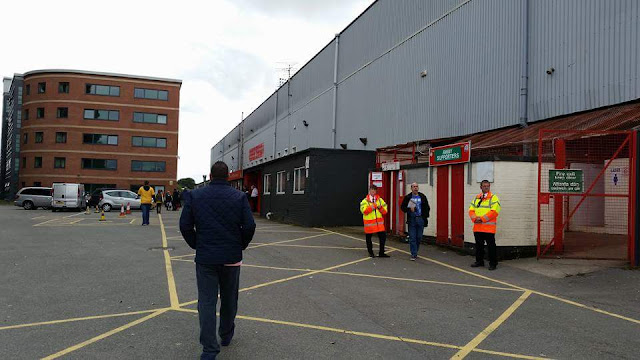 The Racecourse Ground has been used internationally in the past but it does not really seem as a non-league stadium, it feels more like a league one/two stadium which kind of meant that the ground feels out of place in non-league. The ground also does not feel very English because it is very rare in non-league to see a stadium of this design but you could argue this with teams like FC Halifax but you can definitely feel the Welsh-ness of the stadium. 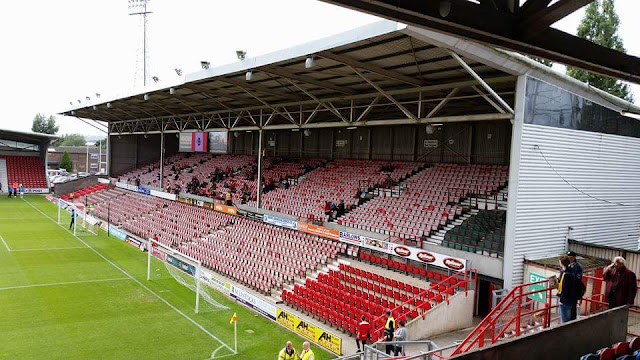 The main stand at the Racecourse Ground is the Mold Road Stand which holds 3,500 and was built in 1999 to replace the previous Mold Road Stand. It has a modern roof and filming facilities and executive boxes and has the word Wrexham in white seats with the rest of the seats being red. Then opposite the Mold Road Stand is The Yale Stand which was built in 1972 for Wrexham to play in  Europe. It holds 4,200 and is two tiered. This is where the away fans are located in the upper tier of one end of the stand. 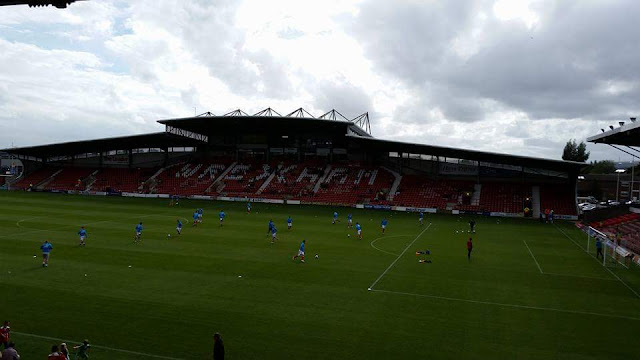 Behind one of the goals is the Glyndwr University Stand which is an all seated stand and holds 2,800. It is two tiered as well and has red seats. On the side on the outside of the stand at the top is a line of plastic which is supposed to look like glass which in all fairness makes it look like the stand has facilities like viewing facilities or rooms that it don't have which ruins it really because all there is behind this fake glass is just metal and openness. 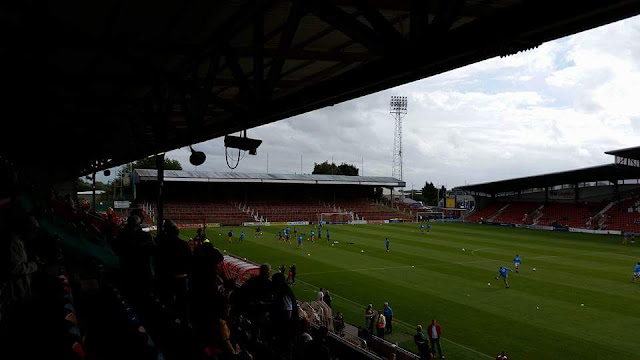 Then behind the other goal is The Kop which is an all standing terrace which holds 5,000 but is not in use anymore. It was previously the biggest terrace in the whole football league. This is where future developments to the stadium are going to be made in the future and when these developements are finished, I would like to revisit the Racecourse Ground. (Description of the Racecourse Ground is sourced from Football Ground Guide). 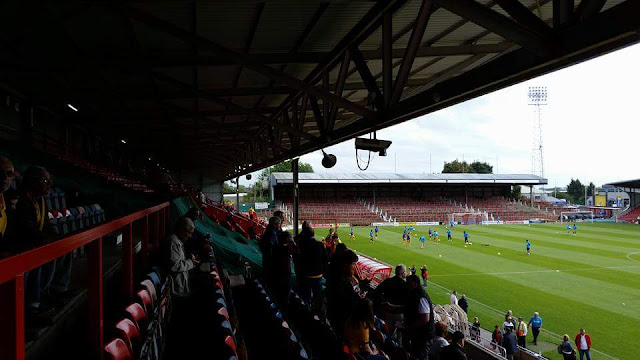 Once I had taken some pictures of the ground, I put both of my flags up and I helped put Johnnie`s flags up as well. By the time we had done that, it was nearly 3pm, so we went and stood in our place where we was going to stand for the game and then the teams came out and there was a massive roar from within the stadium. 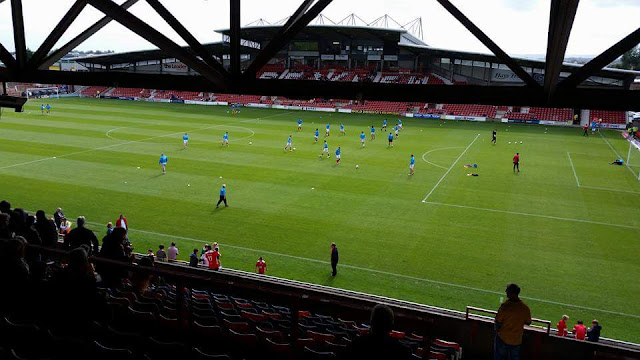 The game finally started and I felt a huge rush of energy from my body as I was really excited for the game and I had been waiting for this game for a long time as this game was one of the stand out games that I wanted to do when we (Sutton) were promoted last season. Sutton started the game confidentally as we were dominating in large areas of possession and we were having a large amount of chances. Maxime Biamou had a great chance to put Sutton 1-0 up but the shot just whistled past the post and Sutton had another 3 good chances in the first half but after a dominating 45 minutes, the game remained 0-0 at half time. 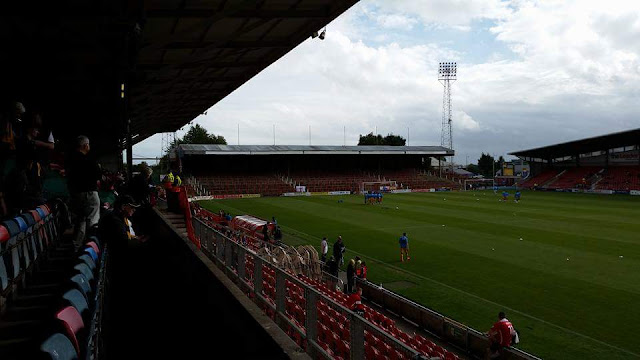 Once we had clapped the team off for their oustanding first half performance, me and Johnnie went to the tea hut and we both fancied a cheeseburger but wierdly, there wasn't any cheeseburgers on the menu and the menu did not have a lot of choices so we both went for a steak pie and I also purchased a bottle of coke as they were only £1.20. We went back up to the stand and took a bite in the pie and I have to say, the pie was delicious, the texture of the pie was soft and the meat inside was tasty, and it was also not too chewy which made the overall taste of the pie really nice. The pie was so nice, I took my time eating it and by the time I had finished my pie and coke, the teams were coming out for the second half. 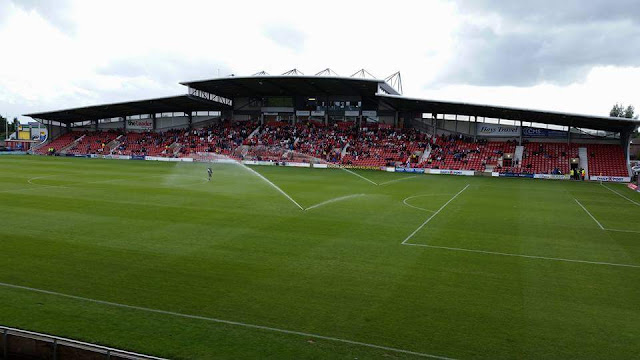 In the second half, Sutton seemed to look a completely different team as we seemed to not have as much confidence as we did in the first half and we were really struggling because Wrexham seemed to feed off our confidence from the first half and they were dominating us and they were getting a lot of lucky decisions from the referee and it just seemed like our great performance in the first half was all being thrown away as Wrexham grabbed a goal in the 64th minute and the scorer Newton looked at least 2 yards offside and we were all furious. 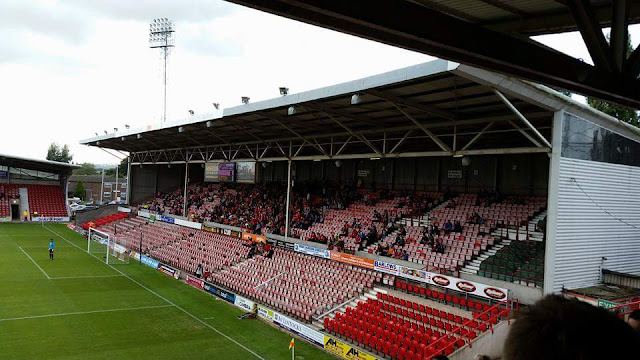 After going 1-0 down, Wrexham continued to dominate and had many chances and we were lucky not to conceed again. In the dying moments of the game, Sutton had a few chances to grab a late equaliser but it seemed like it wasn't to be our day. In the last few moments, the Wrexham keeper clearly had contact with the ball from outside the 18 yard box but the referee disagreed and this killed the game and it finished 1-0 to Wrexham. We were all really annoyed that we lost because we had an excellent first half but it seemed like it just wasn't our day. 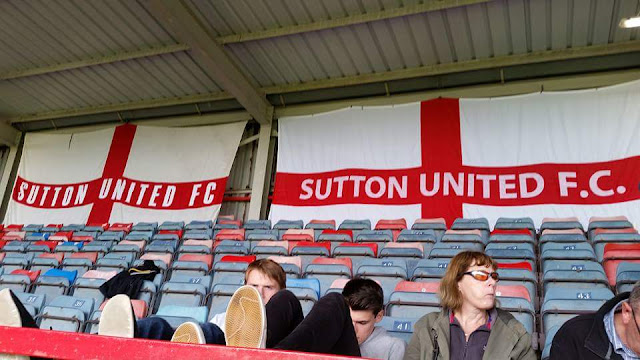 We clapped the teams off and the Wrexham fans were booing their team off even though they had won the game which we all couldnt understand. I took my flags down and we walked back to the coach feeling quite sad but we had enjoyed our day in Wrexham. Once on the coach, we waited for the rest of the people to get back onto the coach and we left the ground at 5:30pm. The journey back was quiet as we were all tired and just wanted to go home. We stopped off at Warwick services at 8pm to grab some dinner which was some KFC and we left Warwick at 8:45pm and we eventually got back to Gander Green Lane at 10:10pm feeling annoyed that we lost the game but happy that we were back home. 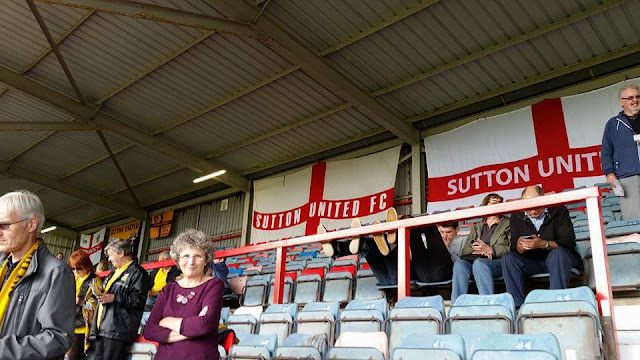 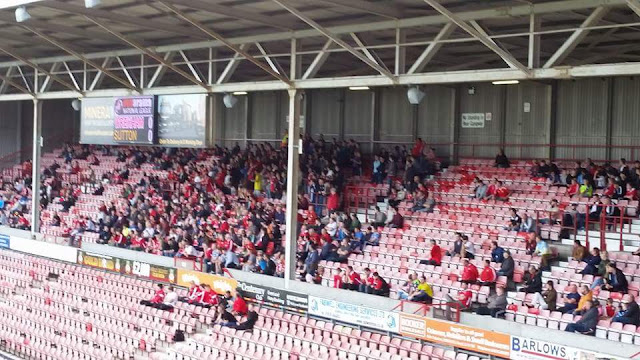 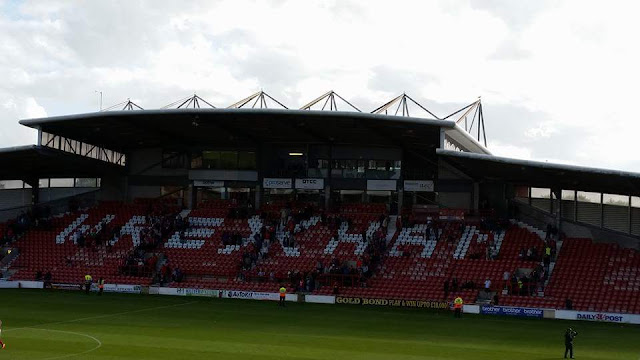 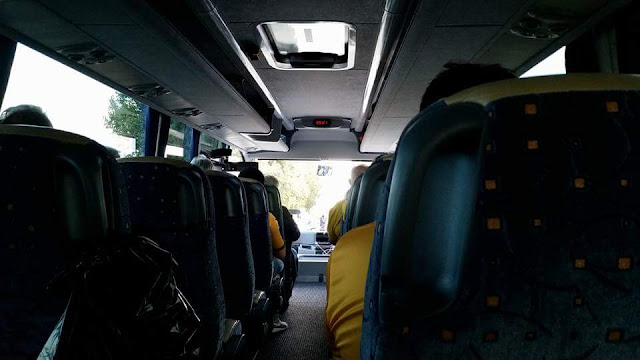 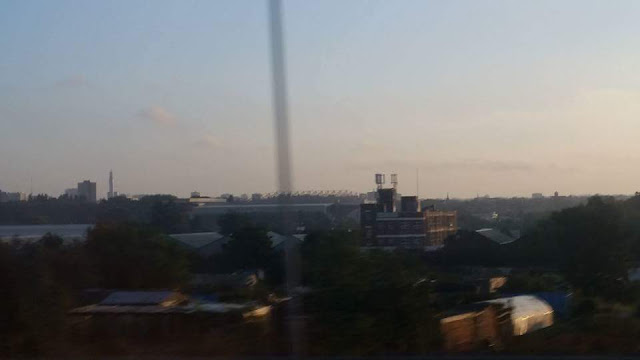