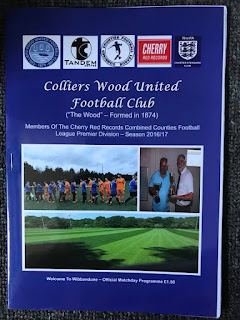 Wednesday nights are not very popular with football fixtures as we do not see many fixtures on a Wednesday night which would normally mean no groundhopping but for me any day and any time is an opportunity for groundhopping and tonight I had no plans and seeing as I was unable to go to Whyteleafe v Molesey last night I decided that I would try and groundhop tonight to make up for not being able to go to Whyteleafe.

Looking for a game to groundhop to on Wednesday night is honestly like looking for a football match to go to when the season is finished because there are hardly any fixtures on a Wednesday especially ones that are local to me. After looking for around 20 minutes I found out that Leatherhead were playing at home in the Ryman Premier but it would be too far for me to go especially in mid-week but then after looking for a bit longer I came across a bit of luck because tonight Colliers Wood United were playing at home to Bedfont and Feltham in the Combined Counties and seeing as I attempted to go to watch Colliers Wood earlier in the season when the game was actually cancelled I made it tonight to be the time when I would return to Wibbandune. I also really wanted to go Colliers Wood because I myself live in Colliers Wood and is one of the most local teams to me. 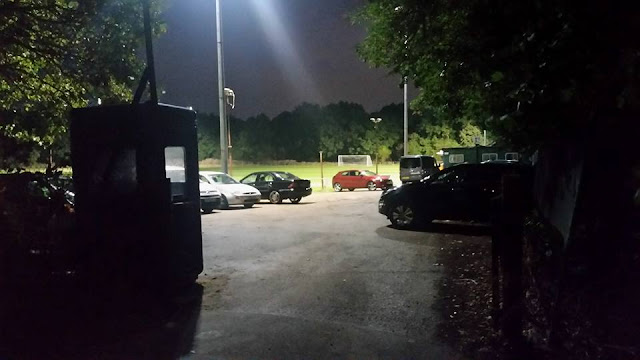 So that was my game for tonight, Colliers Wood United v Bedfont and Feltham and as soon as I decided that this would be the fixture that I would go to tonight I was quite excited because I have been trying to go to Colliers Wood United for a couple of months now and now I am finally going to be doing it. I did go to Colliers Wood earlier in the season but when I got to the ground it was empty because the game had been cancelled 2 weeks in advance and I did not look on the clubs twitter properly which was a shame but now I am returning to Wibbandune to watch Colliers Wood for real. 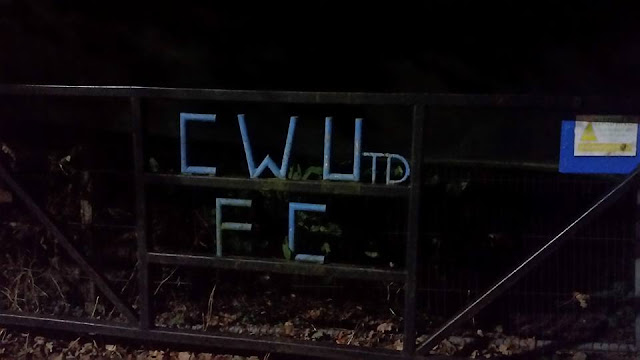 Colliers Wood United FC was founded way back in 1874. Their nickname is "The Wood" and they play in the colours of black and blue. They play their home games at Wibbandune which has a capacity of 2,000 and there are 120 seats which is quite good for Combined Counties level. The early years of their existence were spent in the Wimbledon and Sutton leagues before moving on to the Surrey Intermediate League. During the late sixties and early seventies, the club were members of the Surrey Senior League for a short time, playing in the newly formed division one where they won the league title in 1969/70. Over the years Colliers Wood have reached a number of Surrey FA Cup Finals. In 1991, they moved into Wibbandune and since 2004, they have been playing in the Combined Counties. 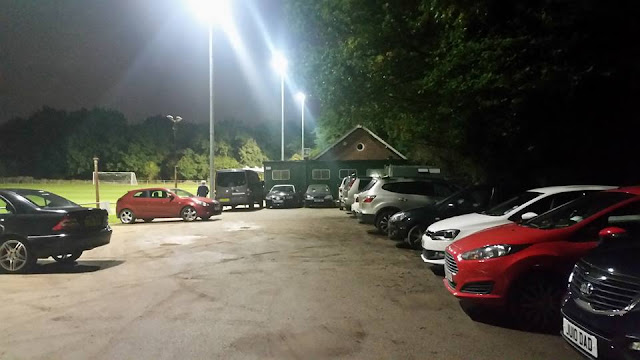 So the night of the game had finally arrived and to be honest I was feely a bit edgy for travelling to and from the game tonight because of this killer clown scenario but there have not been any sightings in this area so is nothing for me to worry about and to be honest I am not really afraid of clowns so there is not really any reason to feel edgy but I was not going to let this situation ruin tonight's big game for me. I have also had a little bit of a problem because groundhopping and away days is costing me and my dad a lot of money this season but luckily enough I have some money left over that I have been saving up which was lucky because if I didn't save up this money I would not have been able to buy a programme tonight or get anything to eat. 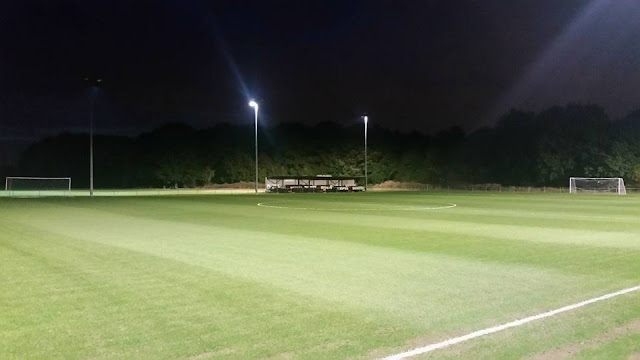 I left my house at 6pm and got on the 200 to Colliers Wood Tube Station and then I got on the 57 to Coombe Way and then I had a 5 minute walk alongside the A3 to the ground. When I got to the ground I didn't have to pay because the club gave me free entry for tonight's game. I then went in the clubhouse and purchased a can of coke and a programme and the programme only cost me £1.50. I then tried to get some hot food but they didn't have any so I had to deal with a small ham baguette which cost me £1.70 and tasted really nice, so nice in fact that at half time I purchased 3 more as this was my dinner and they tasted amazing. I then walked around Wibbandune and took some pictures and took some notes for this blog. 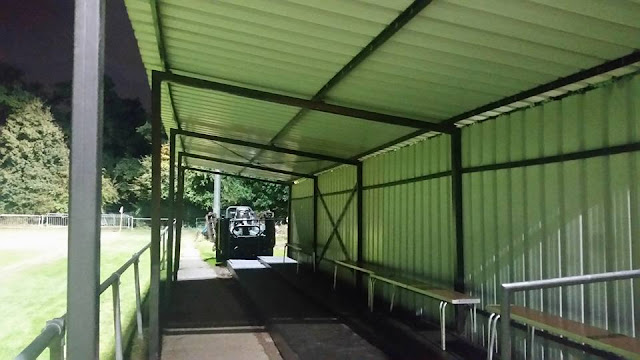 Wibbandune is a really nice little stadium especially for Combined Counties level because you tend to see really nice stadiums like this at this level of non-league and I have only seen a few county level teams which are Walton and Hersham, Molesey and Colliers Wood and Wibbandune is really nice but all county level stadiums are really good. The main area of the ground holds the clubhouse which is where you can buy food and drink and programmes. Next to the clubhouse are the changing rooms and dugouts then next to the club house is a small covered terrace which could hold around 50 people. Then opposite the clubhouse is a 120 seated stand which is really nice especially for the Combined Counties. On the roof of the stand there is a sign saying Colliers Wood United F.C. which in my opinion makes the stand much nicer to look at and makes me appreciate more. Then behind both of the goals is a simple concrete pathway. I really like Wibbandune because it is such a simple stadium with a lot of character because the stand and some other features of the ground were updated in and around 1991 which is only 25 years ago and to be honest the stadiums features look a lot older so I like the way how the facilities are not that old but they have a lot of character. 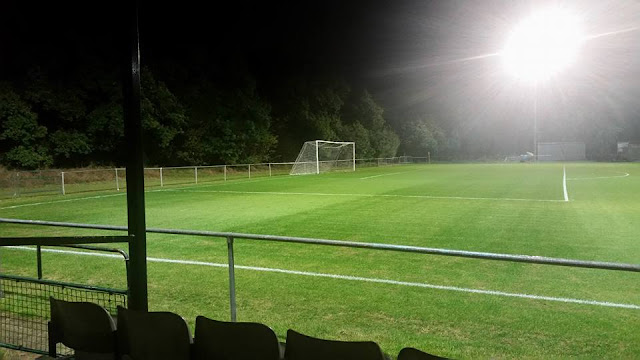 The game kicked off right on schedule and I went behind the goal to support Colliers Wood as they are the local side to me. Tonight underneath my QPR coat I was wearing a Chelmsley Town scarf because it is blue and black and Colliers Wood play in blue and black so the scarf represented that I am supporting Colliers Wood. The football that Colliers Wood were playing was really good, every pass that they made just seemed to be perfect but on the other hand Bedfont and Feltham seemed quite nervous because they were really struggling to perform any successful passes and every time that Bedfont passed the ball it pretty much was always intercepted by Colliers Wood and to my delight Colliers Wood took the lead around 20 minutes into the 1st half. 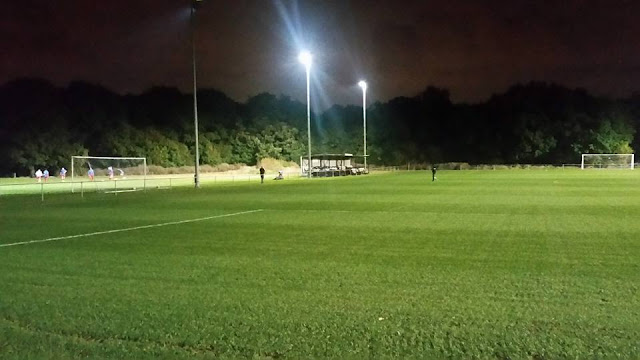 After going 1-0 up Colliers Wood just seemed to grow stronger and had some shots that should have gone it and just before half time Colliers Wood made it 2-0. At half time got some more ham baguettes and at this point the rain had arrived in South West London and I quickly took some more pictures of the ground and went behind the goal but after standing behind the goal in the rain for a couple of minutes in the 2nd half I conceded to the rain and went and sat in the stand to finish off my  baguettes. Bedfont seemed to be playing a bit better but it wasn`t to be their night. At around 8:55pm I had to leave because I had to be home for 10pm because it is a college night. I got on the bus and was home for 9:45pm. I quickly checked twitter and found out that Colliers Wood scored again after I left and it finished 3-0 to Colliers Wood. I really enjoyed my trip to Wibbandune tonight and is a ground that I would love to visit again. 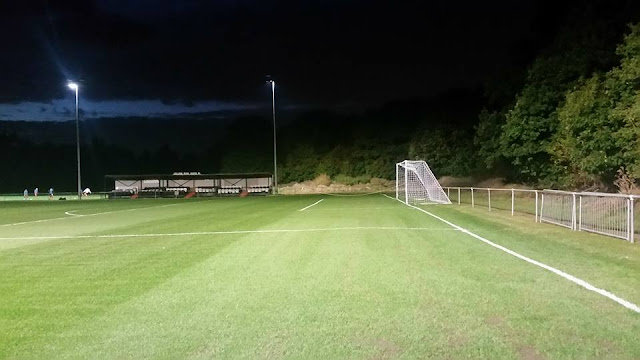 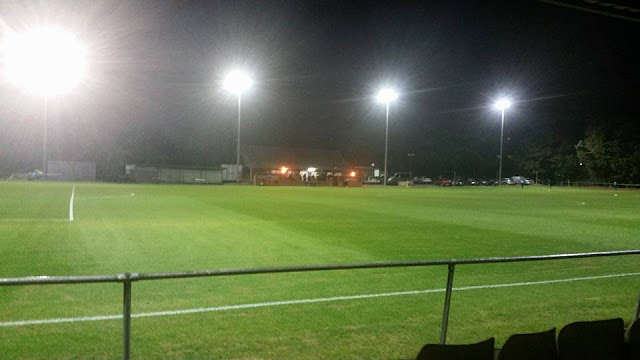 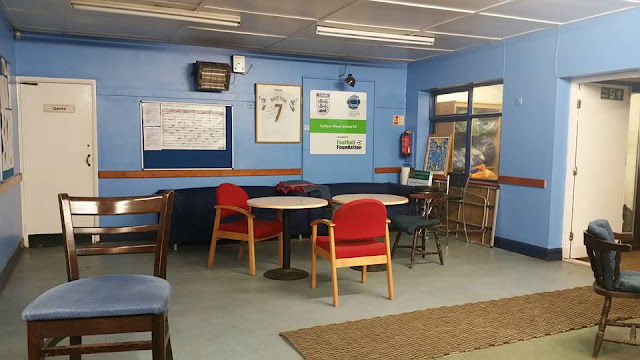 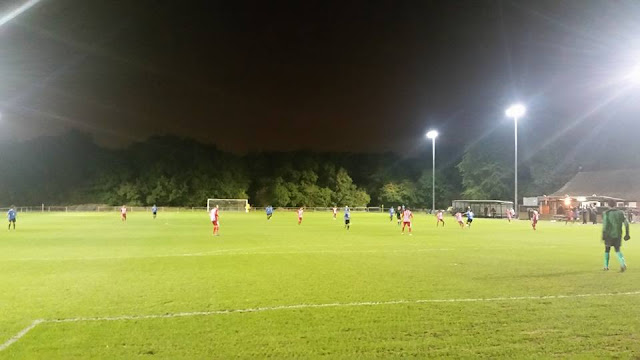 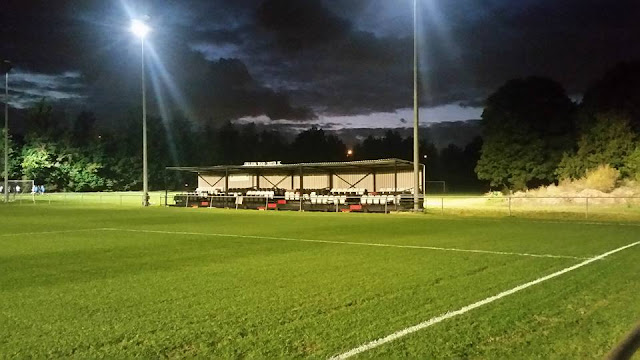 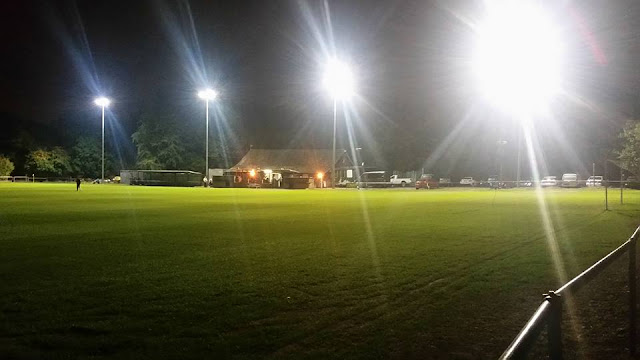 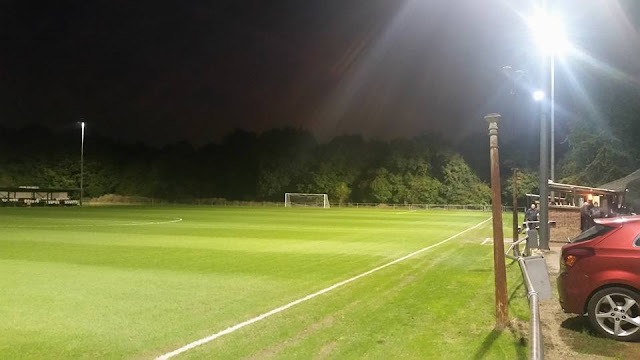 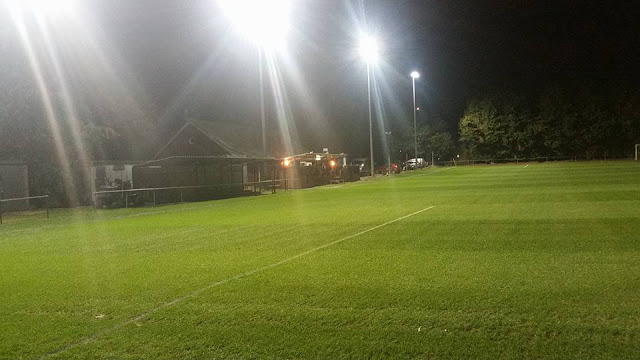 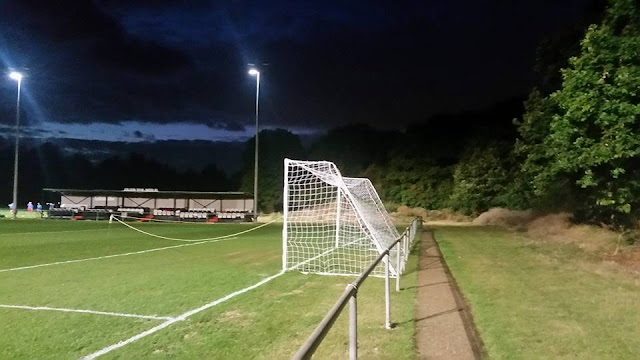 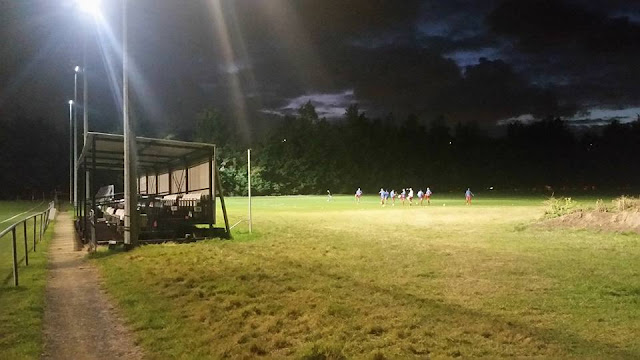 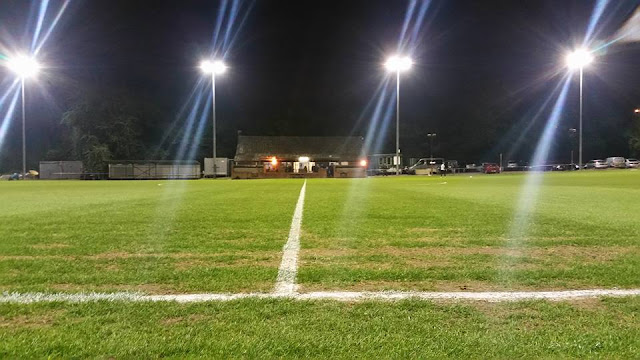 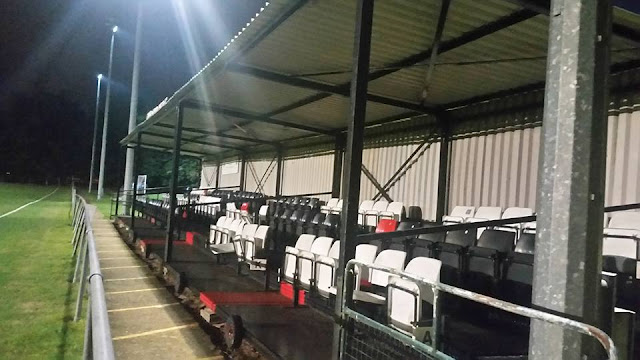 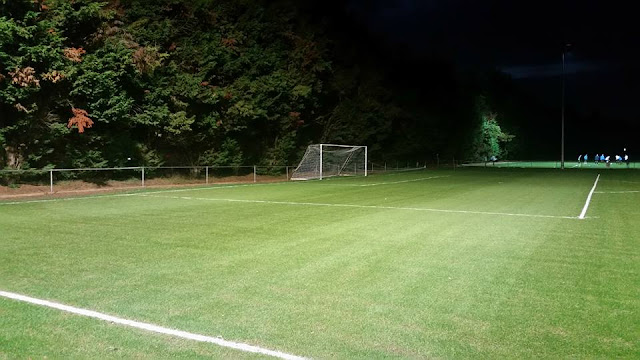 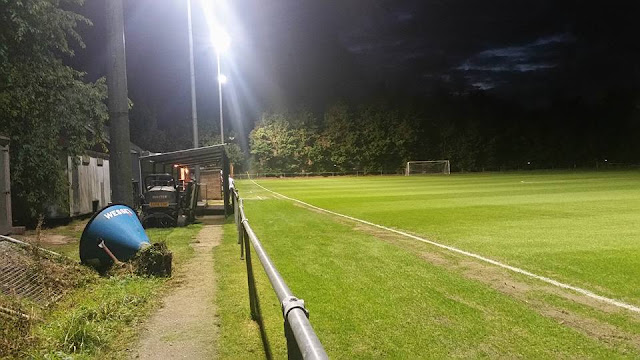 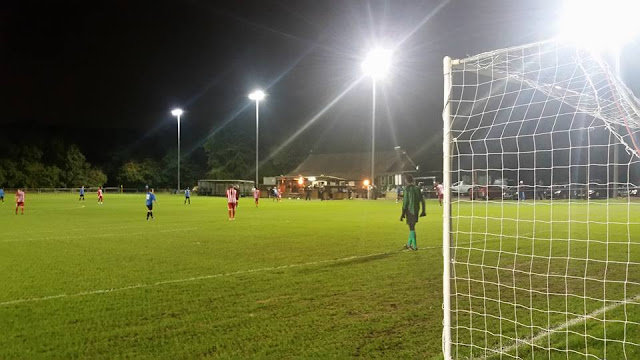 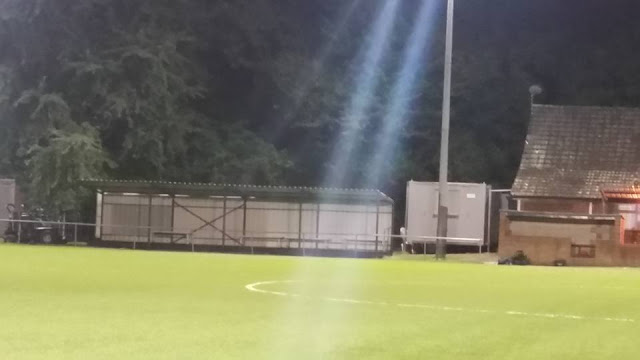