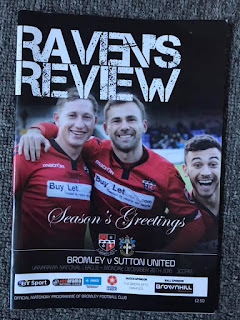 Boxing Day, a day where you normally spend the day with family but for the most loyal football fans, Boxing Day is a day for football and this year was no excuse for me not to go because this year, Sutton were playing against Bromley which is the most local team to us in the league this year and in the past few seasons, this fixture has evolved a small rivalry between the two club`s but some of the Sutton fans do not class Sutton and Bromley as rivals, but for me and a few of the other Sutton fans, we see this game as a rivalry as both club`s are in South London and both clubs play in the same league. 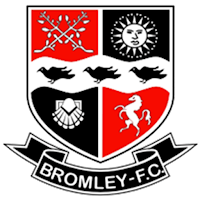 Boxing Day fixtures tend to be very optimistic sometimes because you are pretty much guaranteed to get a team that is very local to you on Boxing Day but the game itself is normally not as good as a normal league game as less people turn up as they are spending time with family and the players may not be at their best as it is the day after Christmas. 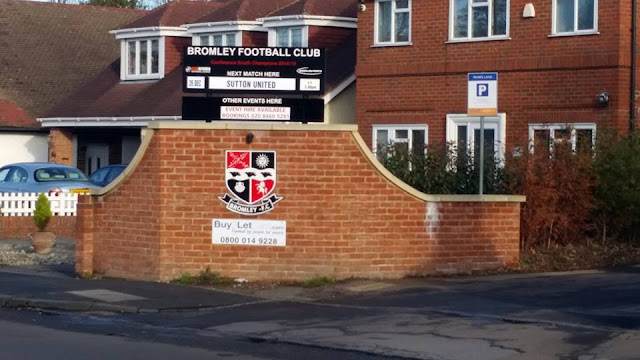 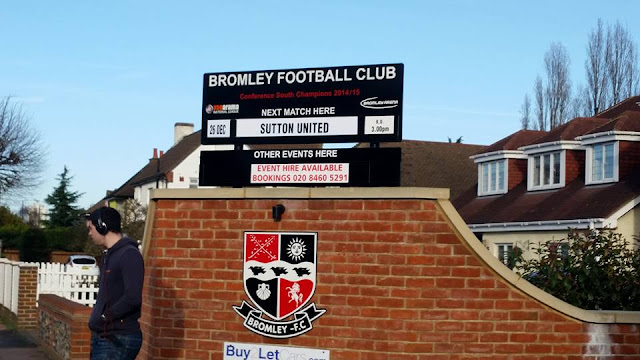 Bromley F.C. were founded in 1892 and their nickname is `The Ravens` and they are also called `The Lilly whites` The club currently play at Hayes Lane which has a capacity of 5,000 and there is apparently 1,300 seats but the main stand only holds 320 and there are wooden seats behind one of the goals and a few plastic seats which looks like it can hold around 600 people seated. The club currently play in the Vanarama National League Premier which is one league below the football league. When Bromley were founded in 1892, they started in the South London League. Throughout the late 20th Century and the early 21st Century, Bromley were playing in the Isthmian League (Ryman League) and in the 2006/07 season, they were promoted to the Conference South and they won the Conference South in the 2014/15 season. 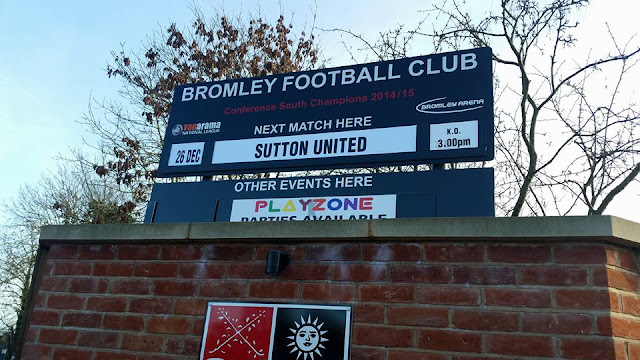 After looking at the history of Bromley F.C. and looking at their form this season, I felt quite confident that we could get a least a point today and with this positive mind set we set off to my nan`s to pick up my Uncle Ben. Whilst on the way to pick up Ben, I had to go into a shop and top up my Oyster Card as I had over spent on it and this stopped my free travel. After topping up my Oyster Card we headed to my nans and had a cup of tea, well for me, a cup of orange juice and then we got in the car at 11am and drove to Five ways near Croydon to catch the 119 bus which would take us to the stadium. 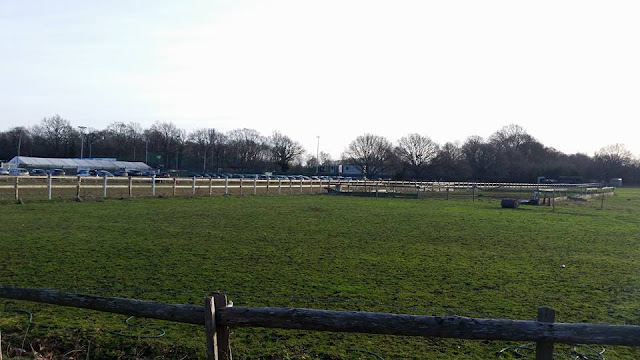 We parked just up the road from Five ways and we only had to wait 1 minute for the bus which was very handy and once we went through Croydon, we realised that we would get to the ground earlier than we were expecting so we got off near West Wickham and had a McDonalds. After finishing our McDonalds, we went back to the bus stop to get back onto the 119 and we had to wait about 10 minutes for it and once we got on the bus, it was busier than the one that we got off earlier. We stayed on the bus for about 15 minutes and then we arrived at the bus stop we had to get off at for the stadium. The stadium is about a 1 minute walk from the bus stop and once we approached the stadium entrance, I took some pictures of the entrance. Then we walked past the home fans entrance and then walked around the back to the away fans entrance and there was already a few Sutton fans waiting for the turnstiles to open. 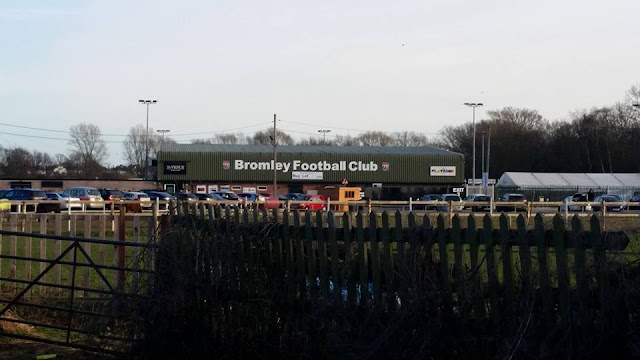 The turnstiles opened after waiting outside for around 10 minutes and before we went in, we was body searched which felt quite intimidating especially as a non-league fan because people generally do not attack non-league clubs and for me, I feel Bromley F.C. feel like they are always having a suspicion against the away fans but I suppose with threats being so high, they are just taking it as a precaution. After passing the body search I went through the turnstiles and I paid £5 as I am a student. We had been given a corner of the stadium and at the ends of our section where large metal segregation fences which made us feel enclosed and feel quite intimidated. I then put up both of my flags and then I took some pictures of the ground. 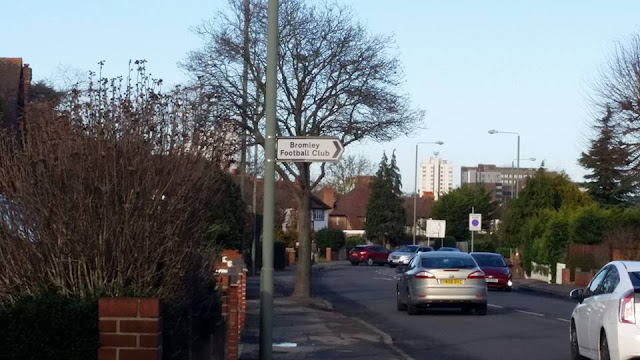 Hayes Lane is an interesting ground that has a mix of old and new. The old look is from the two partly covered stands (to the rear) located at each end of the ground. They both have, by modern standards, a disproportionate amount of supporting pillars running across the front of them. The north end has one row of sturdy crush barriers along its length at the front, whilst the other, the Norman Park End, has surprisingly been fitted out with seats in the central section with benches at each side and to the front. This arrangement seems rather odd. I presume that these were fitted at some point to fulfil some league regulation for the number of seated spectators, as otherwise they don’t really make sense. 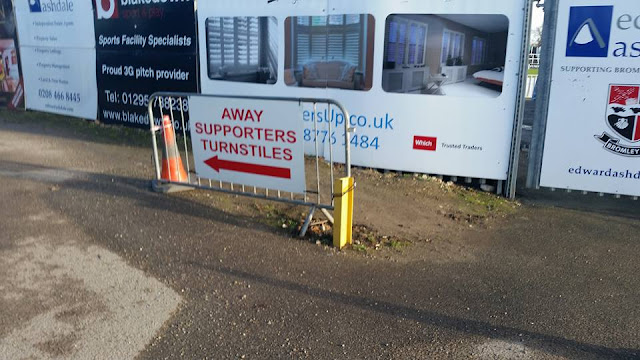 On the west side is the more modern looking John Fiorini (Main) Stand. This covered all seated stand doesn’t have any supporting pillars and sits astride the half way line. Opened in 1993, it has a capacity of 285 seats (believed to have come from Wimbledon’s Plough Lane). Opposite this is a reasonable sized open terrace that has two rows of some classic looking crush barriers from end to end, with a newish black wooden fence at the back. Both the north terrace and this stand have fences that can be used when segregation of spectators is in force. Behind the east side terrace is a cricket pitch. I hope that the batsmen can’t hit a ‘six’ that far! The trainers benches are situated on that side, but the dressing rooms are behind the Main Stand. During 2017 the Club installed an artificial 3G playing surface at Hayes Lane. (Description of Hayes Lane is sourced from Football Ground Guide).

Around 5 minutes before kick off, we started to get the atmosphere going by starting some chants and through the first half, both teams (mainly Sutton) had chances to score but we didn't take our chances like usual but this didn't dampen our spirits as we kept our heads high and continued to chant to cheer on the team but it just couldn't edge the team to score and this meant at half time, the game was goalless. I didn't feel to hungry at half time but my dad had got a portion of chips and he offered me a few so I had a couple and they tasted quite nice so I would recommend buying chips if you visit Hayes Lane. 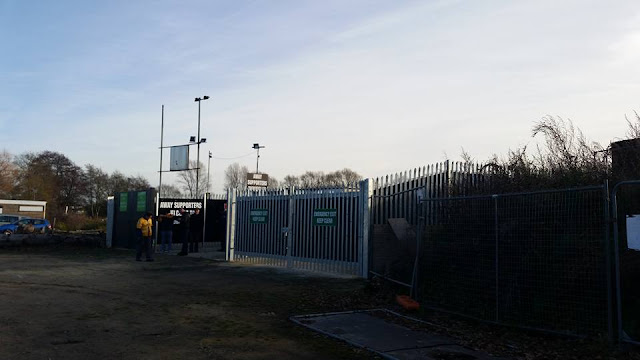 The second half was a 45 minutes I will never forget because most of the Bromley fans were next to us as they were kicking towards us and this meant a lot of their fans were getting cocky towards us but we ignored them and continued to support our team. The second half started and in the first 20 minutes of the second half, both teams had chances but again both teams didn't take those chances. Towards the last 20/25 minutes of the game, Bromley seemed to grow stronger and become more confident as they were creating a lot more chances but by the time the clock had reached the 90th minute, we was hanging on for a point but in the last few seconds of injury time, Bromley scored and it seemed like our luck had run out. The Bromley fans were climbing on the segregation fence and trying to act all hard and big and it was just a total embarrassment because they hadn't ever chanted but now they are giving it all but the game finished 1-0 to Bromley and we can say that we supported our team and created an atmosphere which is a bit more than the Bromley fans can say. 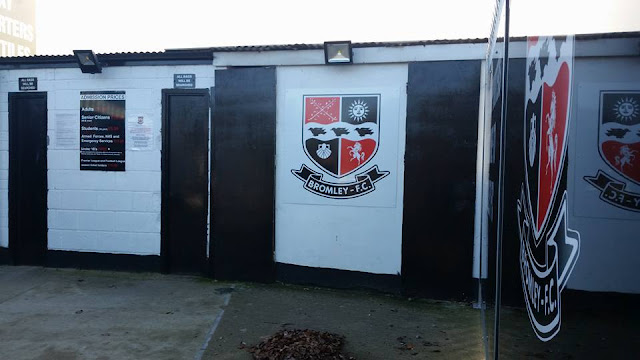 On the way out of the stadium a few of the Bromley fans started throwing abuse at me and a few of the other Sutton fans so I just said "support your own team and I`ll support my team, you chose to support your team how you want and we support our team how we want". We then got on the 119 straight away as it was not very busy and it was coming as soon as we got out of the ground. Me and around another 5 Sutton fans got on the bus and they all got off at Croydon and we stayed on until Five-ways. We then got in the car feeling annoyed that we had conceded with literally seconds to go. We dropped my Uncle Ben off and then we drove home and got home at around 6pm. I would recommend going to Bromley if you are going in the home end but if you are going in the away end, the Bromley fans make it intimidating. 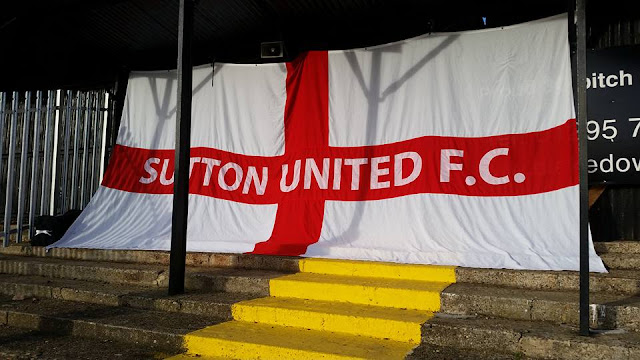 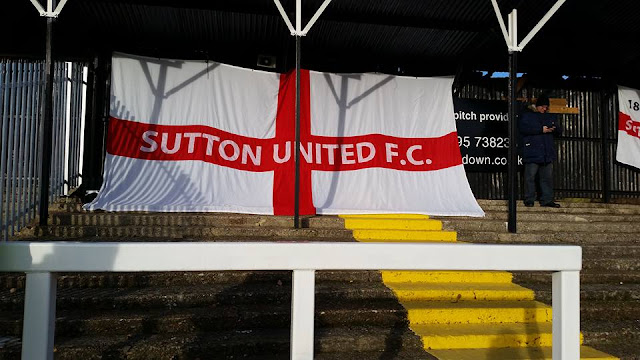 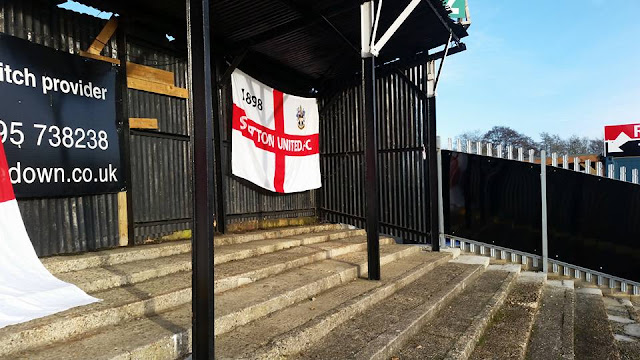 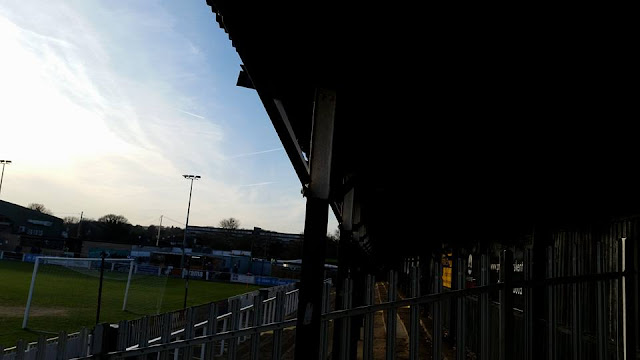 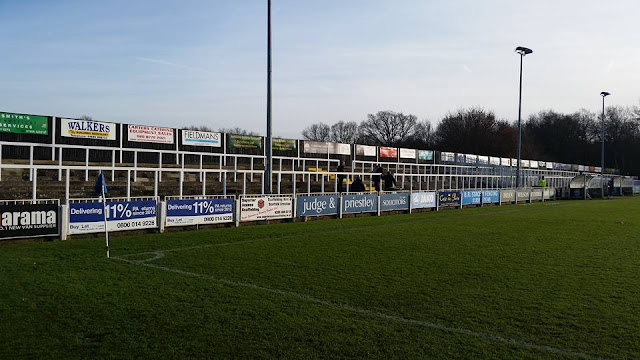 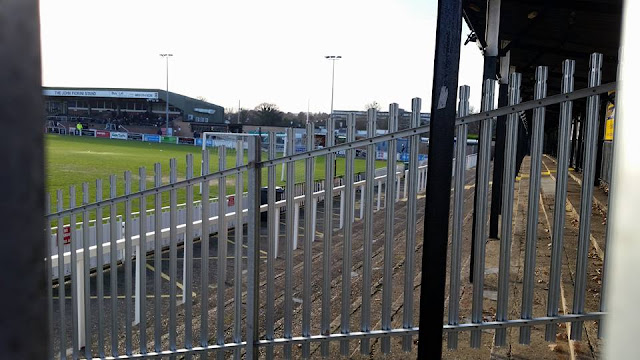 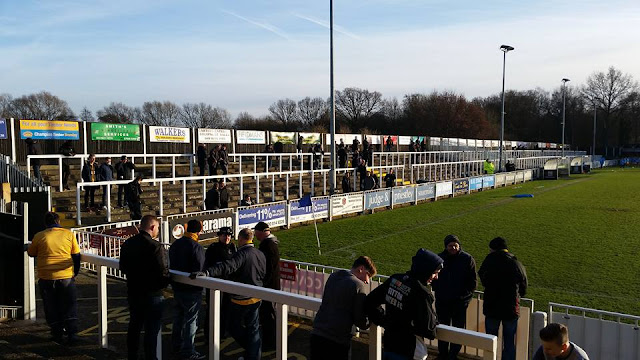 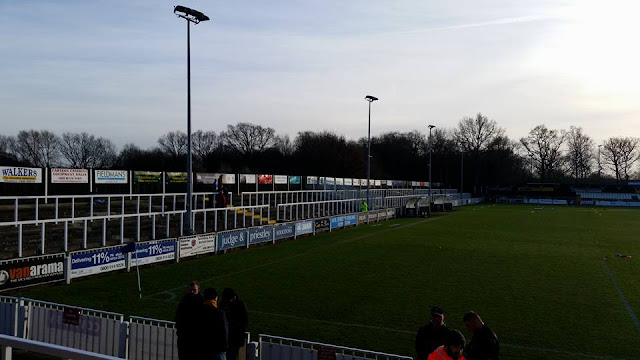 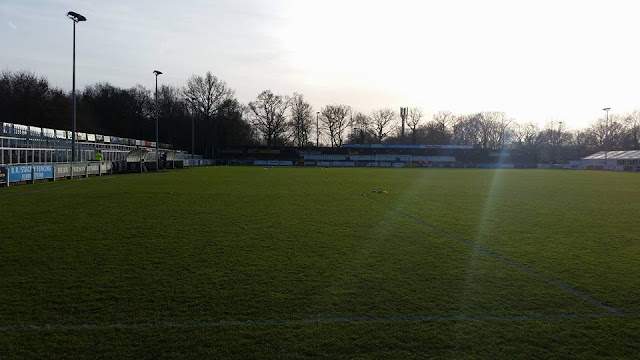 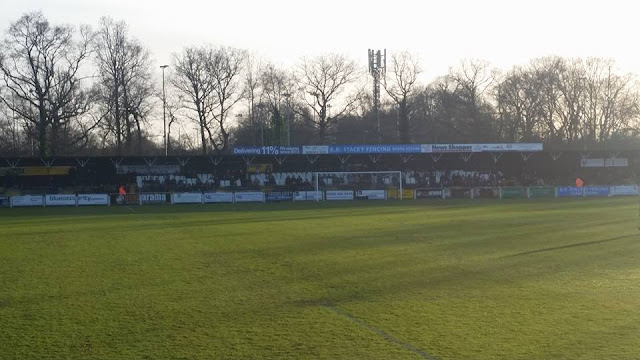 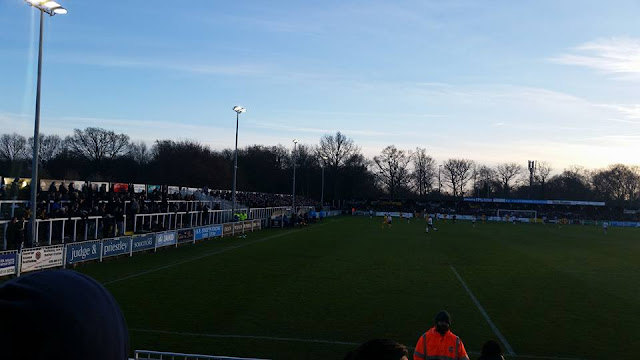 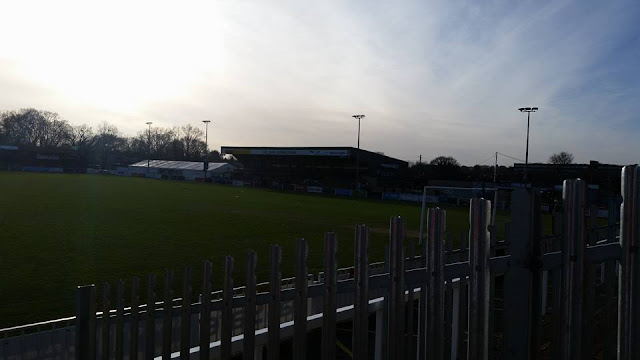 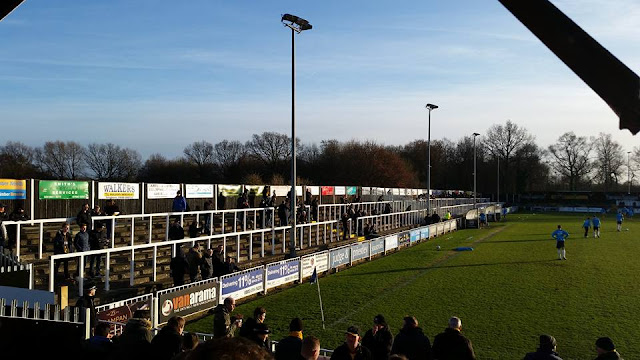 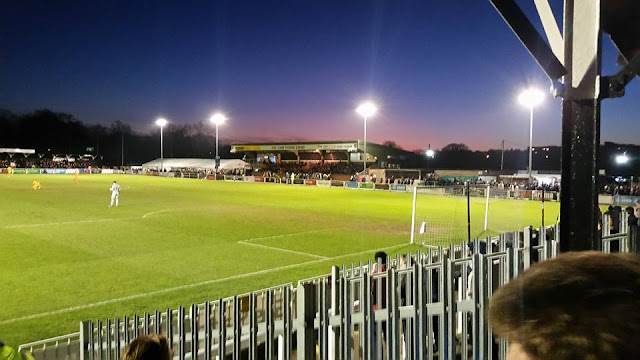 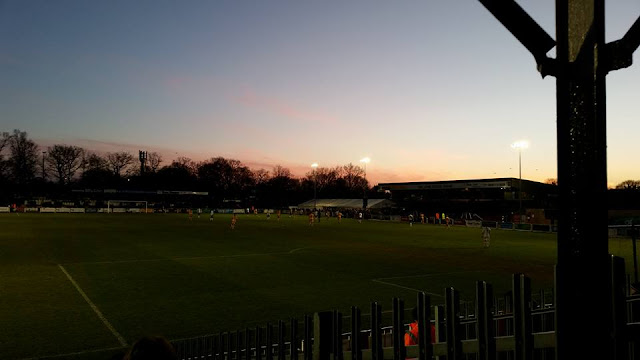 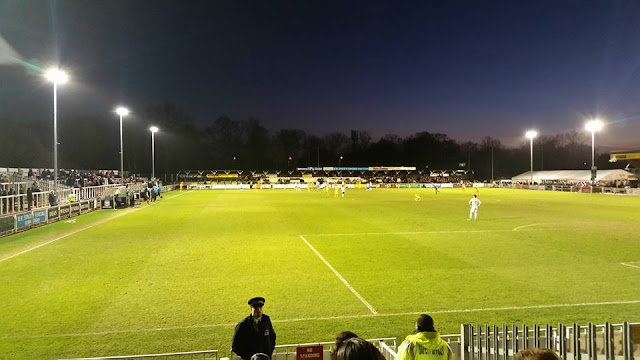