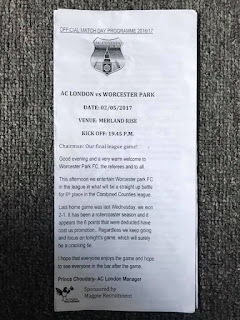 So Sutton's season had finished and this meant that most of the other leagues had also finished and May is really hard for football because most of the leagues have finished and the only games that are taking place are games that have been re-arranged and I was eager to try and get another new ground in before the season fully ended and to my luck, AC London were playing at home on Tuesday night and they play at Banstead Athletic's ground (Merland Rise) which is a ground that I have never been to so I decided that I may as well go to this game as I have never been to Merland Rise before.

Merland Rise is a stadium that I have been trying to visit this season but I haven't had the chance as every time Banstead or AC London were home, Sutton were also playing at home or we were going to watch Sutton away and I had other grounds higher on my list that I wanted to visit and this meant that I hadn't found the time to visit Merland Rise this season but now as the season is nearly over, I did have time to visit Merland Rise and to my luck, the one Tuesday night I wasn't doing anything was the Tuesday night that AC London were playing at home. I would have preferred to visit the ground when Banstead were playing at home but as long as I visit the ground to watch a game, I am happy. 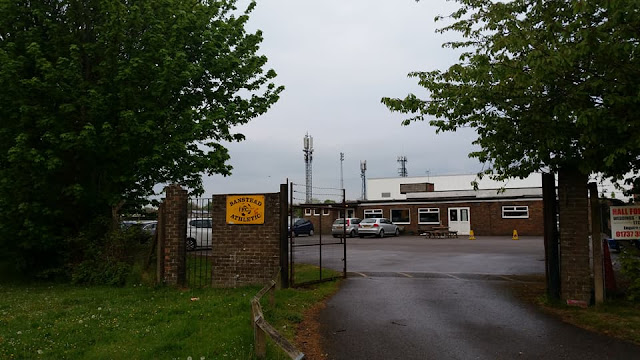 After deciding to go to AC London on Tuesday night, I went to sleep early as it was Monday tomorrow and I had college which meant I would have to be up early. Monday went quite quickly as I had a lot of coursework to do at college and this meant I spent all day at college doing work and I wasn't distracted. Tuesday eventually arrived and I didn't feel very excited for tonight's game because I still had coursework that I needed to do and my coursework was my main priority of today. I spent the morning doing coursework at college and I finished college at 12:30pm as I finish college early on a Tuesday. I got the bus home and I got home at 1:30pm and by the time I got home, I started to get a little bit excited for the game because I was now all up to date with my coursework and this meant I could now enjoy my visit Merland Rise tonight. 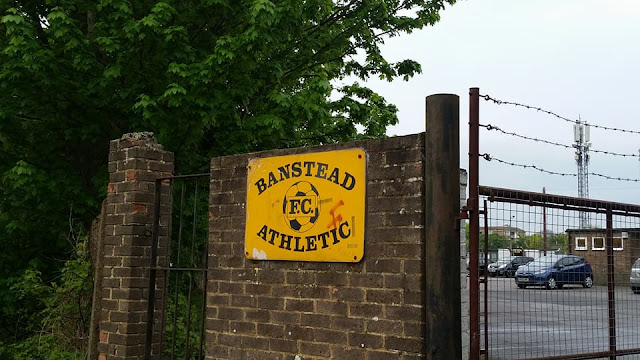 After getting home, I had a quick wash as I felt tired and I wanted to wake myself up. I also changed clothes as I wanted to wear a fresh pair of clothes for tonight and I decided to wear my Adidas jumper and a pair of jeans and my Adidas shoes as I like to go for a casual look when I go groundhopping. After getting changed, I had a bit of time to look into the history of AC London F.C. 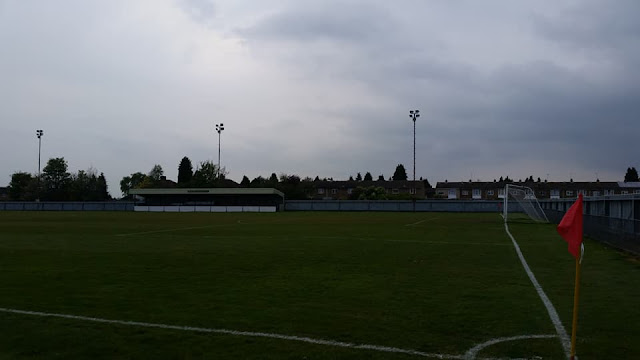 AC London F.C. were founded in July 2012 by a 16 year old called Prince Choudary. The clubs full name is Academic Club London FC. The club was originally founded as an amateur youth team but after its first season, the club established a men's first team and a reserve squad and academy for the 2013/14 season.  By June 2015, the FA committee allocated the club to the Kent Invicta League for the 2015/16 season and the club has become the first club to ever become a semi-professional side after three years of being founded. The club were moved to the Combined Counties Division One for the 2016/17 season and they recently started groundsharing the Merland Rise stadium which Banstead Athletic who are the main club who runs and owns the stadium. 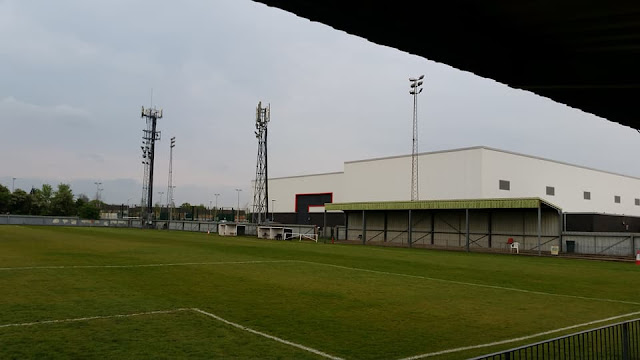 My dad picked me up from my house at 5:30pm and we drove to Tadworth and we eventually arrived at Merland Rise at 5:50pm which was quite early so we decided to stay in the car for 10 minutes as we were very early. At 6pm, we went to the stadium and as the gate to the entrance of the ground wasn't open yet, we decided to go in the clubhouse until the gate was open. The clubhouse is not the biggest but for the Combined Counties, it is a decent bar. The staff are very friendly and the bar is very warm. I decided to get a pint of diet coke and my dad got a lemonade. At 7pm, we went back outside to see if the gates were open and they were so we went outside and it only cost us a £1 each to get in which is very cheap and they were giving away free programmes which were just a leaflet but it is better than nothing. 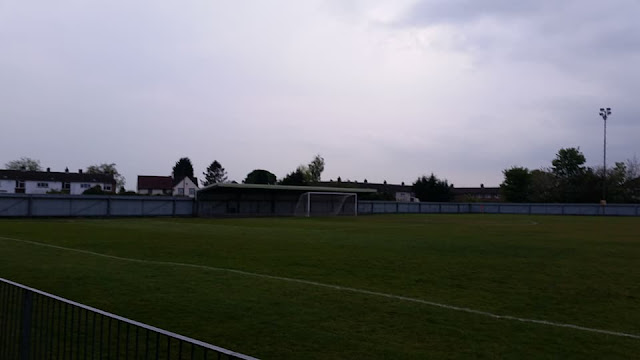 Once we were inside the ground, we walked around the whole ground to take some pictures and I have to say, Merland Rise is one of the most traditional non league grounds that I have ever visited because it is very simple and there are no modern features to the ground and it is everything I look for in a traditional county level stadium. It seemed like the more I walked around the ground, the more I seemed to like it. 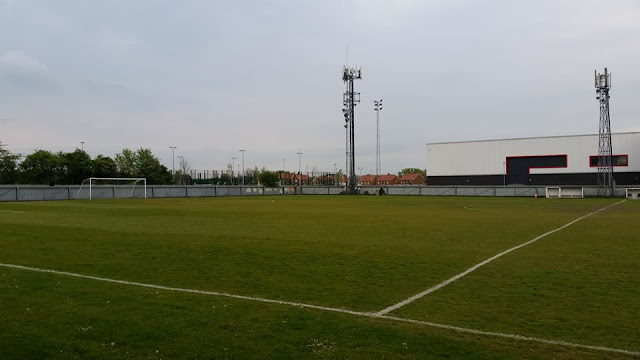 Merland Rise is a traditional and very smart stadium. The ground has a capacity of 1,500 and there are around 100 seats. The main stand is very traditional and is very small and probably dates back to the 1950's and there are only around 100 seats in the stand. The stand has supporting pillars and there is a sign on the stand which says 'Banstead Athletic FC'. Opposite the main stand is a fairly open walkway but to the right hand side is a tall covered terrace that can hold around 150/200 people and you feel tiny when standing inside. Behind one of the goals is another covered terrace that is right behind the goal and can also hold around 150 and the terrace is not very high. Then behind the other goal is narrow open terrace that can hold around 400 people. 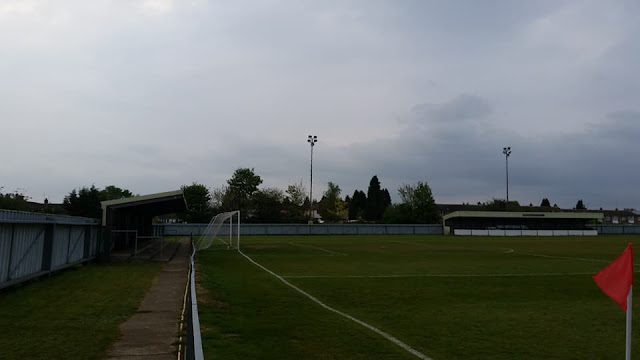 After taking some pictures of this traditional non league ground, we went and stood in the covered terrace behind the goals and the teams soon came out after that. There wasn't many people in the ground, probably 30 at most but there was no official attendance but it did feel quite sad to see this traditional non league ground very empty. We did see one of the Sutton fans at the ground and we recognised each other and we said 'hello to each other. For the game, we were neutral but I decided that I wanted to support Worcester Park as I have a good relationship with the club and because I know a few of the people who run the club. 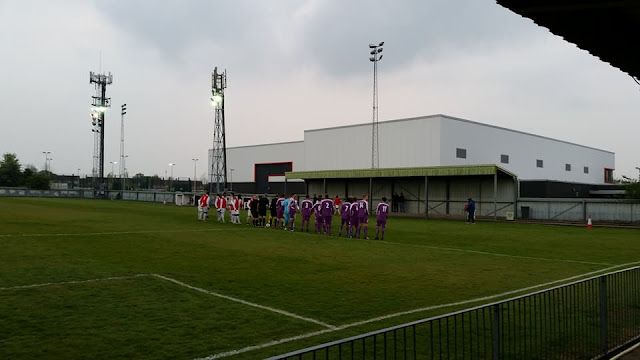 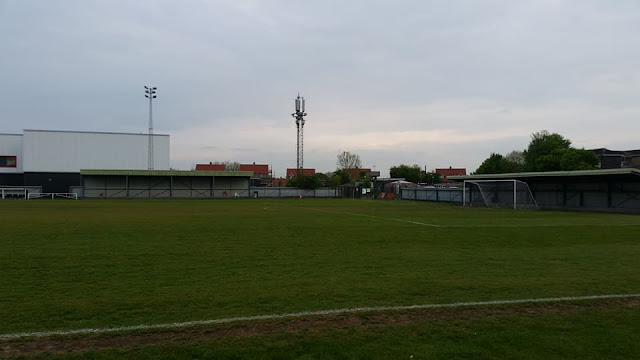 During half time, we decided to go back to the clubhouse as it was starting to get cold and once inside the clubhouse, I got a sausage roll as it was the only hot food that was available. The sausage roll tasted quite nice as it was nice and warm and it was also quite soft. I then got myself a bottle of diet coke to take outside with me into the ground to drink during the second half. By the time we headed back out into the ground, the second half had already started and we went and stood on the covered terrace behind the goal as Worcester Park were kicking this way. AC London had the odd chance to score and equalise but Worcester Park had the majority of chances in the second half and must have had around 5 chances to score but the AC London goalkeeper was on hand to keep his team still in the game. The game eventually finished 2-1 to Worcester Park and that was the season finished for the two teams and Worcester Park had finished in 4th and AC London had finished in 7th, a good season for both teams. 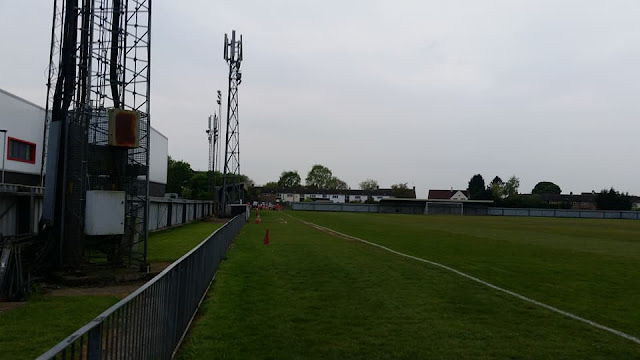 We headed out of the ground feeling quite cold but I felt quite happy because I had visited another ground and that is another ground under my belt and another ground that I have visited that is inside of the M25. I got home at 9:50pm feeling exhausted but very happy. I would definitely recommend going to Merland Rise because everyone is friendly and the stadium is a typical small non league ground and it really needs to see an increase in the amount of people going there. 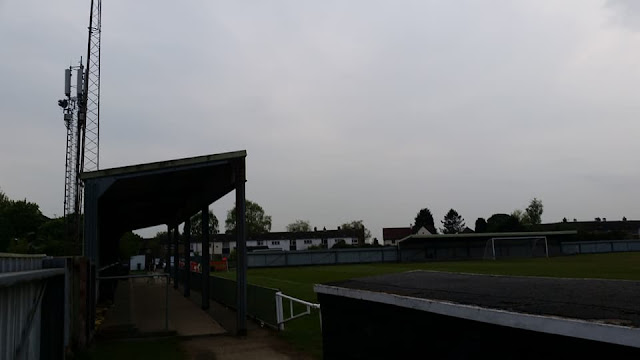 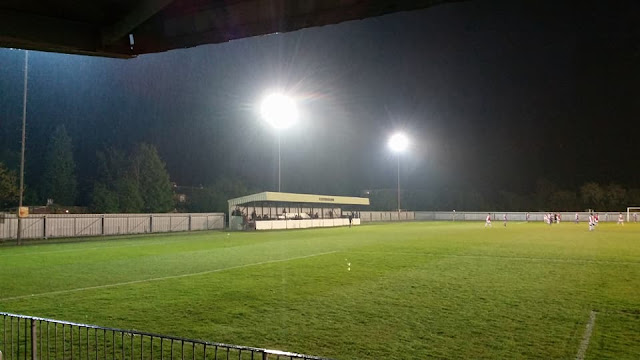 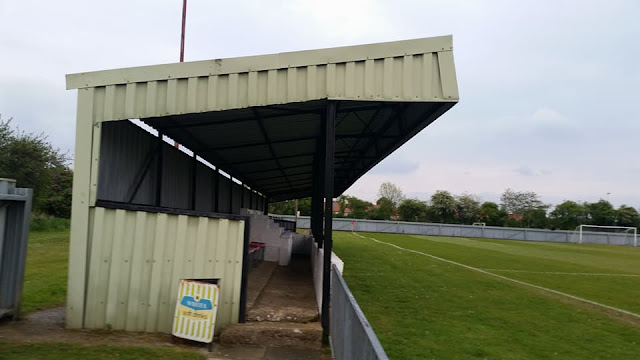 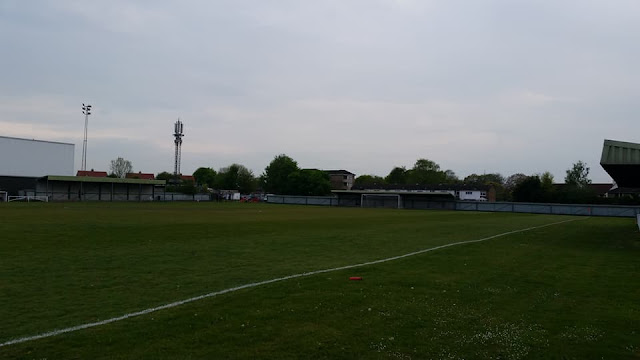 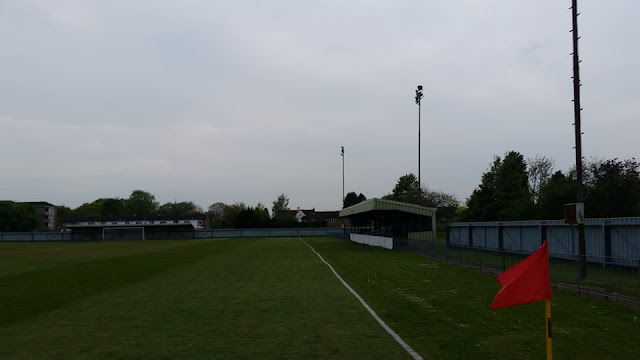 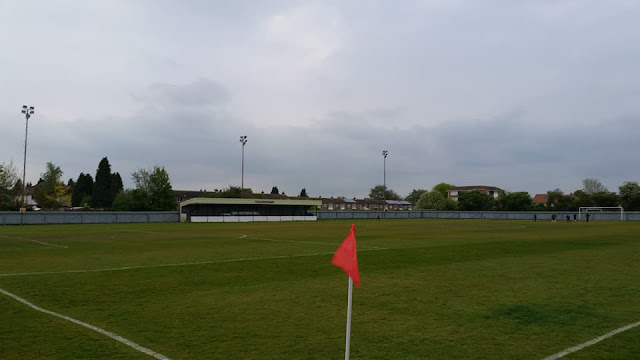 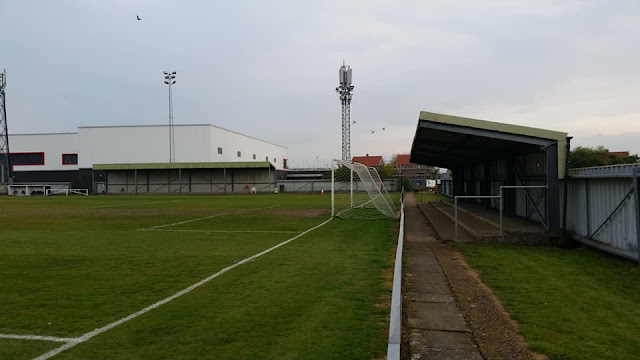 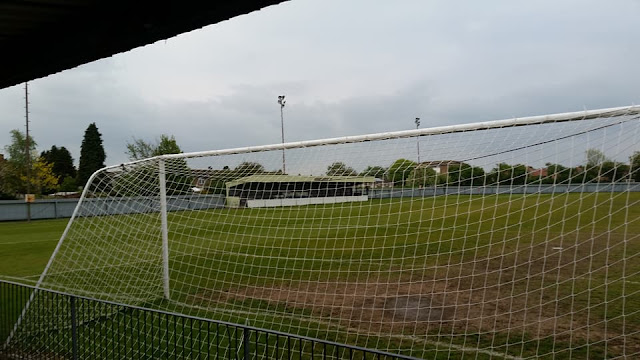 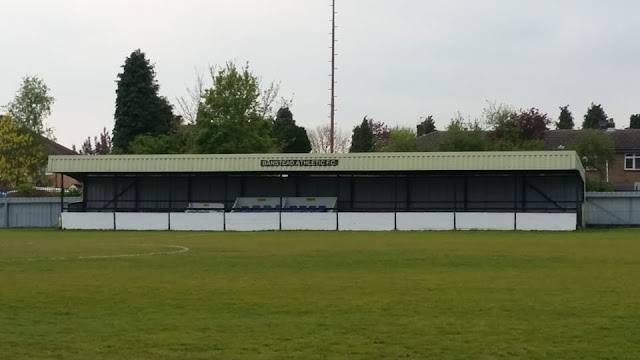 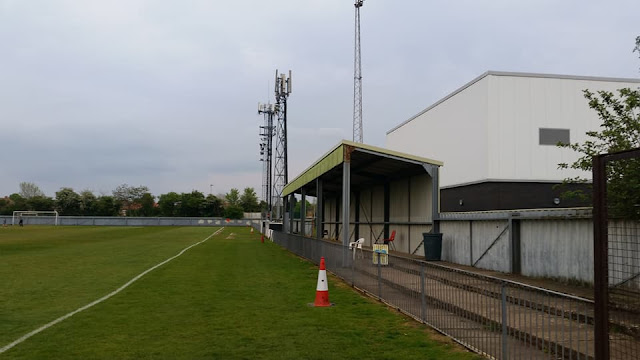 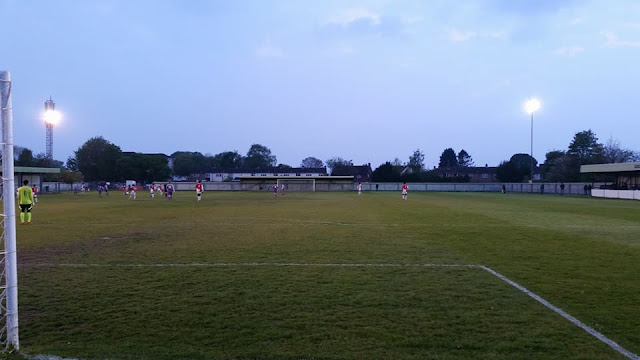 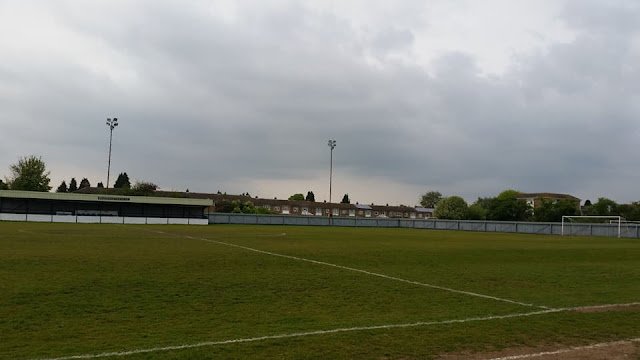 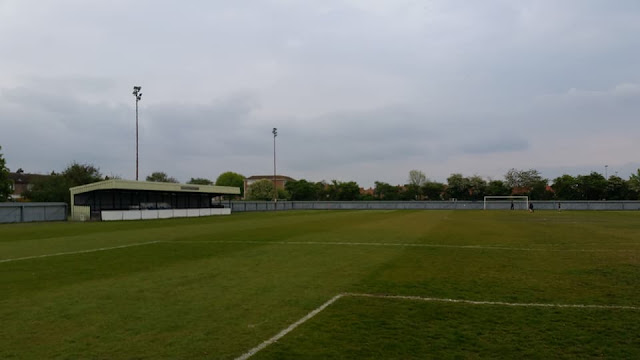 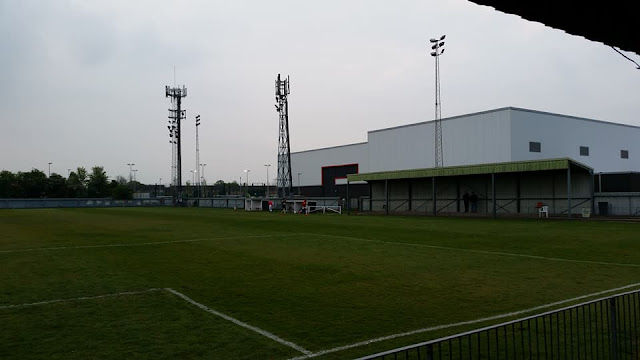 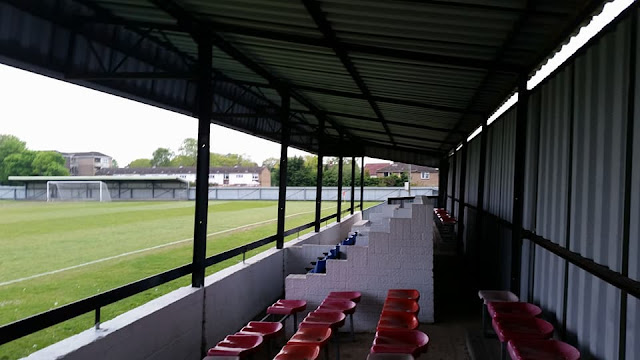 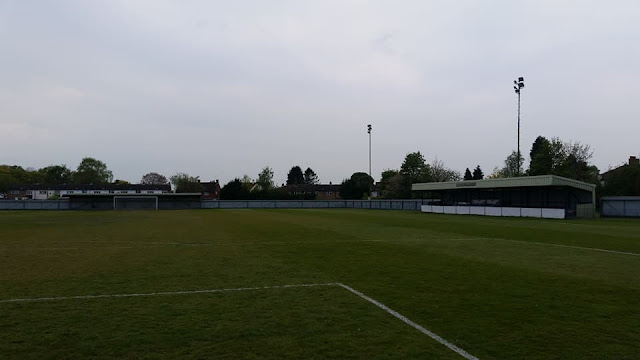 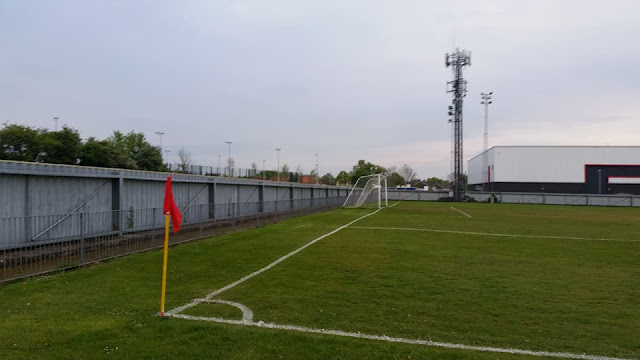 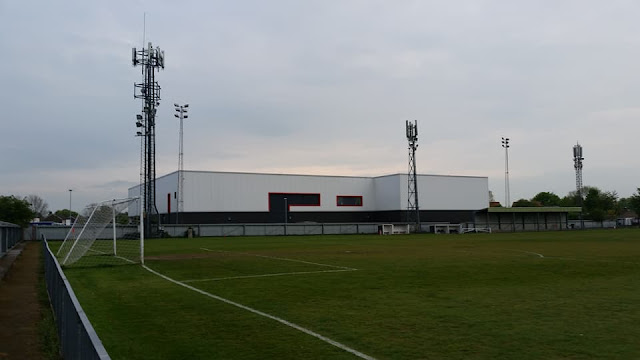 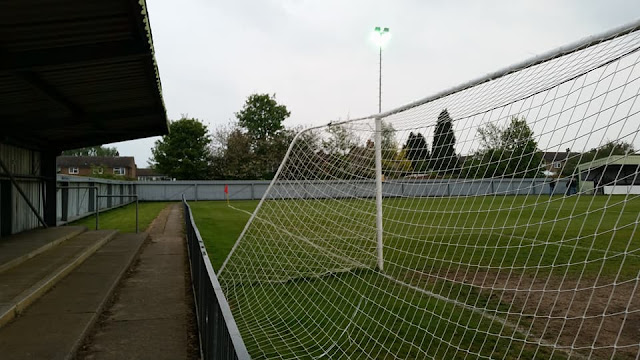