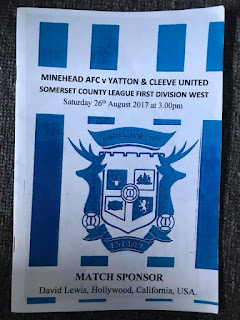 One of the best things about the Summer holidays is going on holiday and the football season returning and already, I have been to four new grounds this season and I would be going to another new ground whilst I am on holiday for the week in Minehead and the new ground that I would be visiting is Irnham Road, the home of Minehead A.F.C. and it will be ground 54 for me and ground 50 on this blog. The reason why we decided to go to Minehead for our Summer holiday instead of going abroad is because we haven't been to Minehead for over 9 years and we wanted to return to the Butlins resort in Minehead as I have a few early childhood memories from there and I wanted to go there one more time before I turn 18. 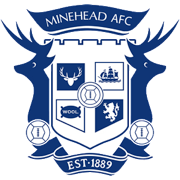 After going to Chester on Saturday, we were knackered but we spent most of Sunday packing and getting things ready. Monday finally arrived, we woke up at 5:30am and got dressed and started our 4 hour drive to Minehead. Our first stop was McDonalds by Heathrow Airport for breakfast and we then continued to Newbury Services for a quick toilet break and to buy the Non-League Paper, we got back in the car and after 3 and a half hours on the road, we finally arrived at Butlins Minehead just after 10am. 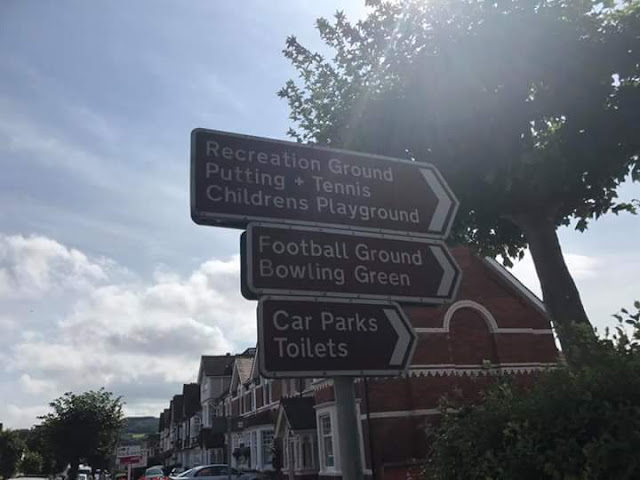 We then spent the rest of the day getting to know the resort again and spent time playing darts in hotshots and on the fairground. We was eventually allowed into our room at 3pm as we are gold members and we unpacked and then went to dinner and then had a shower before going out into town and going in some of the arcades along the beach and then went back to Butlins for some evening entertainment before going to bed just after 11pm. Tuesday, Wednesday, Thursday and Friday was spent doing the normal things that you do when you are at Butlins, going on the fairground, watching some shows, arcades and other bits in-between such as playing snooker and darts. Saturday finally arrived and I woke up at 7am feeling very excited for the game this afternoon but I had to be quiet because my dad was still asleep, so I made use of the time by looking into the history of Minehead A.F.C. Minehead A.F.C. were founded in 1889 and they currently play their home games at the Irnham Road Recreation Ground in Minehead. They also currently play in the Somerset County League Division One West. They currently play in the colours of blue and white. When Minehead A.F.C. was founded, they played in the local leagues but this changed in 1923 when they joined the Western League. In the 1970/71 season, Minehead reached the FA Cup 1st Round but lost 2-1 at home to Shrewsbury Town. Throughout the early 1970's, Minehead achieved a few promotions in the Southern League but their most famous and successful season was the 1976/77 season when they finished as runners-up in the Premier Division which was the league below the football league at the time and today it would be the National League Premier. The club had made a few more appearances in the FA Cup throughout the 1970's. The 1980's saw the club face a few promotions and relegation's. In 1998, the club changed its name to Minehead Town FC. The club recently changed its name back to Minehead A.F.C. and in 2010, the club were relegated down to the Somerset County League. After looking into the history of Minehead AFC, I had a quick shower and then got dressed. By this time, my dad had woken up and he also had a quick shower and I spent some time on my phone checking my social media. We were both ready at 8:20am and we then walked down to the dining hall for breakfast and I had what I always have for breakfast when I come to Butlins which is a traditional fry up. After eating breakfast, we went back to our apartment for 30 minutes to let our breakfast get down before going back out. We watched a bit of TV in the room and we then left our room just before 10am and we then walked to the Skyline Pavilion and went in the arcades and won some tickets which is something we always do when we go to Butlins and we end up getting around 10,000 tickets every time we go there. After spending some money in the arcades, we went to the fairground and went on the rides. 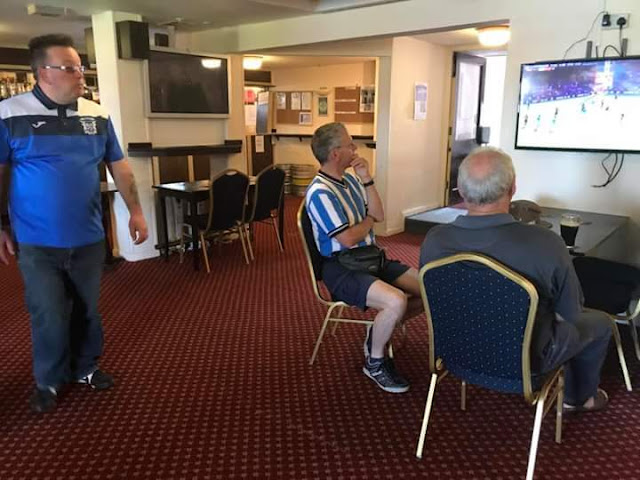 We then went back inside the Skyline Pavilion for a drink and I went for a coke float and it only cost £2.60 which is quite reasonable. We sat down by the main stage and watched a show even though they are for kids, I weirdly still find them interesting rather than entertaining. By the time we had finished our drinks and finished watching the show, it was 1:30pm so we decided to go back out on the funfair for 15 minutes before leaving the resort to walk up to Irnham Road. Most of the rides were quite busy but the ride with the smallest queue was the carousel so we went on that and as many people say, "it's not a Butlins holiday without a ride on the carousel". We left Butlins just before 2pm walked into the town centre and we used Google Maps on my phone to find the ground as there wasn't many signs but it only took us 15 minutes to walk from Butlins to the stadium which isn't bad at all but my legs were aching a bit, mainly due to me being unfit. 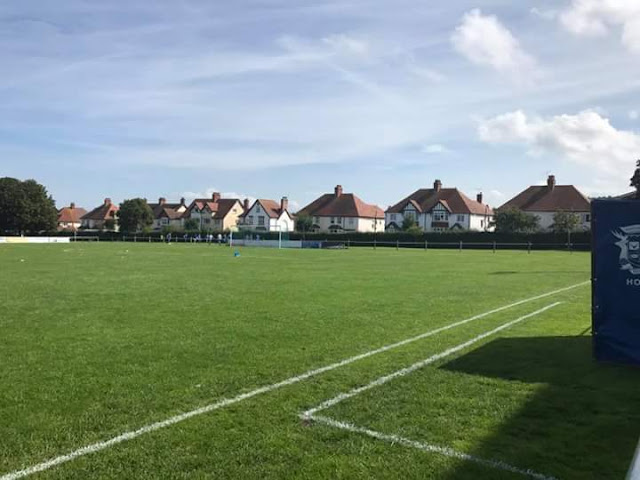 Once we arrived at Irnham Road, I took some pictures of the outside of the ground and then we went inside the bar and there was a few people in there. The bar is decent for a county league side as there are a few TV's, a dartboard and a range of different drinks available. We then purchased a programme from a man selling them in the bar and it only cost £2, we then watched the last few minutes of the AFC Bournemouth vs Manchester City game. After watching the end of the game on TV, we then headed outside and there were a few people already in the ground. We then walked around the ground to take some pictures. 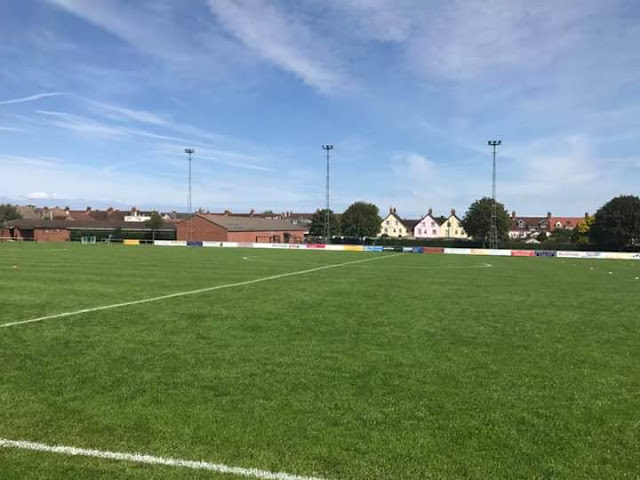 Irnham Road has a capacity of around 1,500 and there are around 300 seats. The stadium is located in a public park which means you can watch the games for free. There is a large seated stand which holds around 300 seats and the bar and tea hut is located under the stand. The rest of the ground is all uncovered and the pitch has a pitch side barrier and the ground feels more like a Sunday league ground but the main stand adds character to the ground. 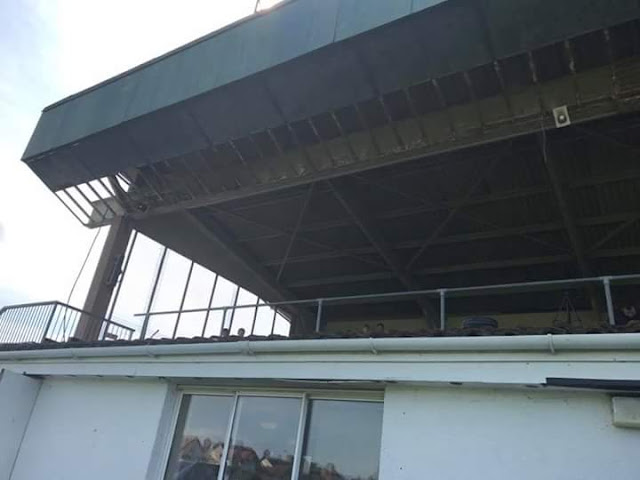 After walking round the ground to take some pictures, we went to the tea bar to see if there was any hot food available and luckily enough there was but no cheeseburgers but they did have bacon rolls which is the next best thing so me and my dad got a bacon roll and for drinks, I got a can of Coke Zero and my dad got a coffee and that cost £6 which is very reasonable. We then went up into the stand to eat our food and read the match day programme. The bacon burger was really nice and really well cooked and I would definitely recommend getting one. 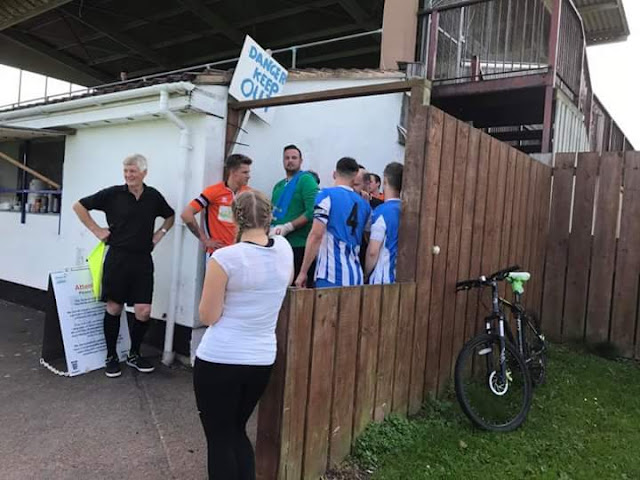 We then headed down back to the pitch side to get some pictures of the teams coming out. To my surprise, there was only two officials (a referee and one linesman) and this meant a women stepped in for the other linesman but I suppose at this level, you don't have many officials but it was good to see that the women was passionate to keep the going ahead by stepping in. The game eventually started and we decided to go behind the goal that Minehead were kicking towards and within a few minutes of the game, Minehead were 1-0 up and we both gave a loud cheer when they scored. 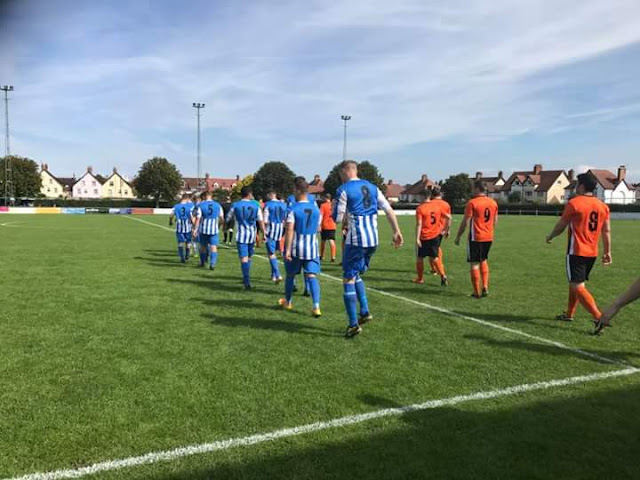 Minehead seemed very confident going into the game and it was showing very clear because a few minutes after going 1-0 up, they scored again and we cheered even louder this time because we could see how much it meant to the team. Yatton did have a few chances to get back into the game but Minehead were on hand to keep their 2-0 lead. Minehead continued to dominate and they managed to get another two goals before half time and amazingly, it was 4-0 to Minehead at half time. 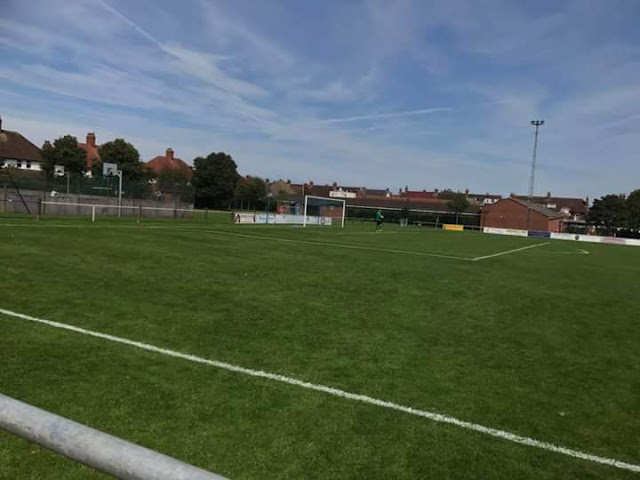 We then went and sat back up in the stand during half time to look at the half time scores and luckily enough, Sutton were beating Maidstone 1-0, that made me feel very happy because we had seen a great first half here at Irnhan Road and Sutton were winning. By the time we had looked through all the scores from all the leagues, the second half was about to start but we decided to watch some of the second half from the stand. You get quite a good view of the pitch from the stand but the two supporting pillars do block some of your view. 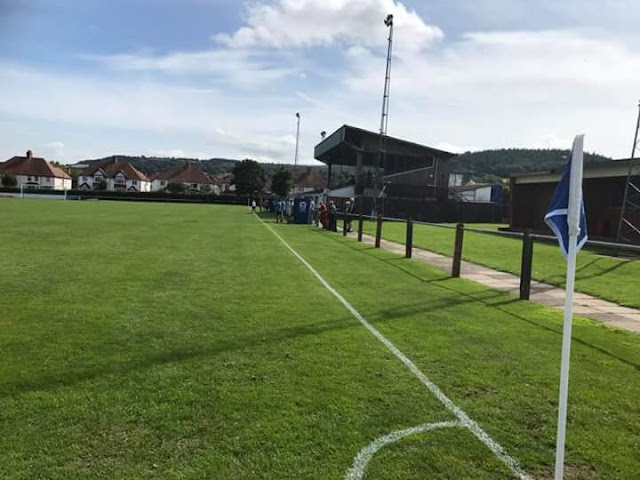 After about 10/15 minutes into the second half, Yatton seemed to have found a way back into the game as they scored but there wasn't a very loud cheer but that is probably due to Yatton not bringing many if any fans which was quite sad but we clapped when they scored to give them a bit of respect. Minehead dominated the rest of the second half, they were creating chances but they were being shot at the goalkeeper or they went just wide. We had a bit of a chat with the Yatton keeper as he asked whether we were Minehead fans and we said that we are here on holiday and we are also groundhoppers. The game eventually finished 4-1 to Minehead A.F.C. and we clapped the players off and then we walked back to Butlins and we also checked the other scores and Sutton had lost 3-1 which annoyed me but we had seen 5 goals and had a great afternoon for the price of £8 which is a bargain. 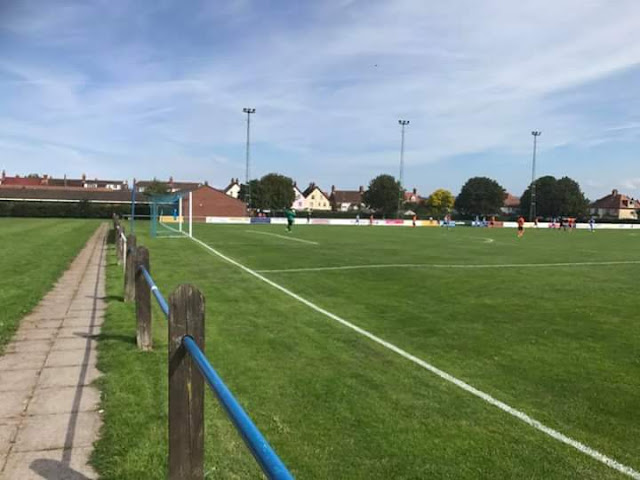 We eventually got back to Butlins at 5:15pm and we headed straight for dinner as we were feeling a bit peckish. We finished dinner and went back to our apartment and each had a shower and watched TV before heading out to the evening fairground and then watched a show, played darts and then went in the arcades before going to bed at 11:15pm. 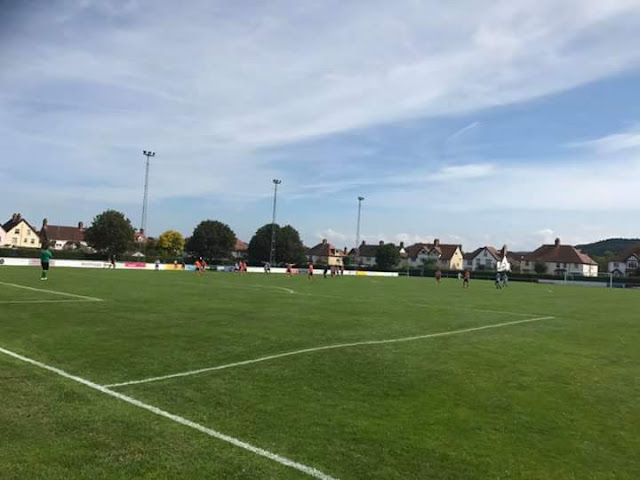 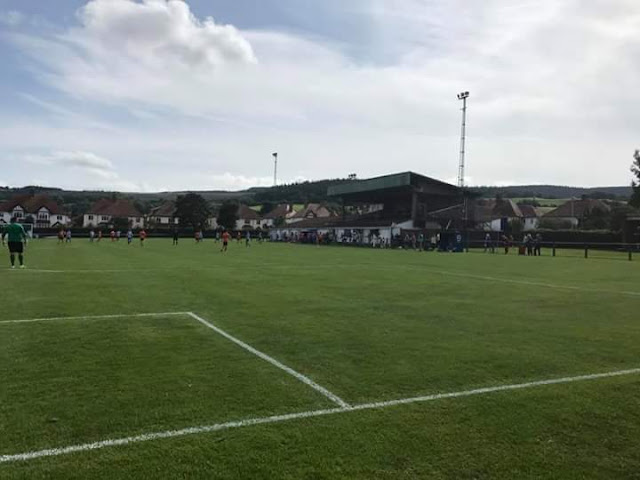 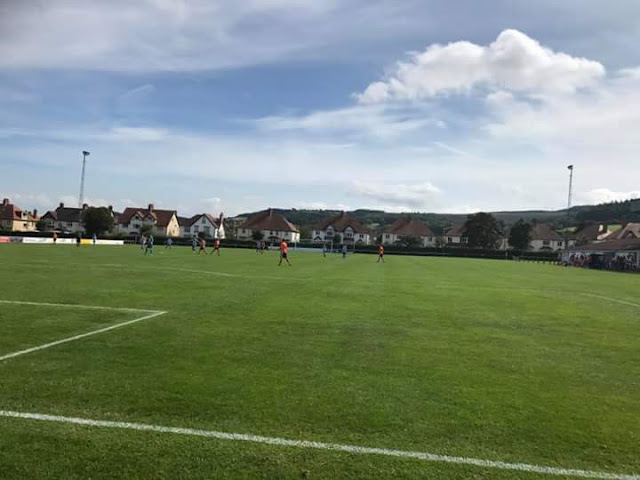 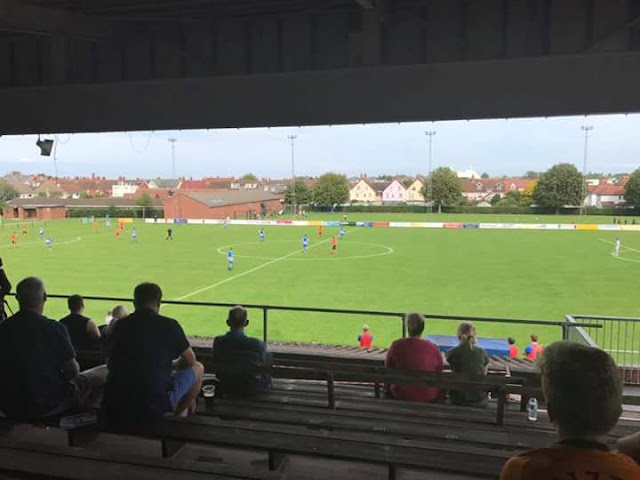 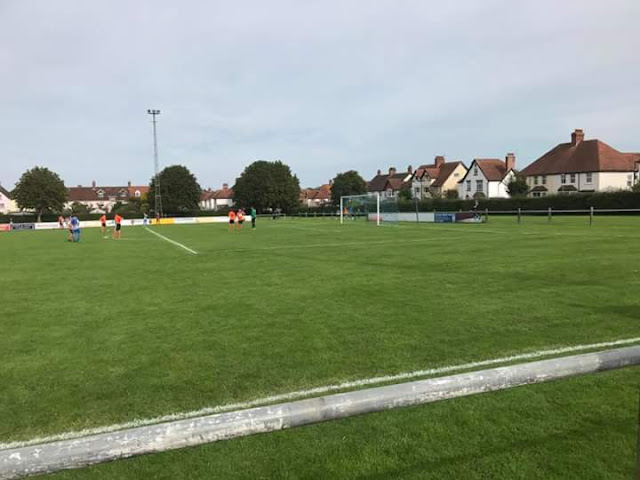 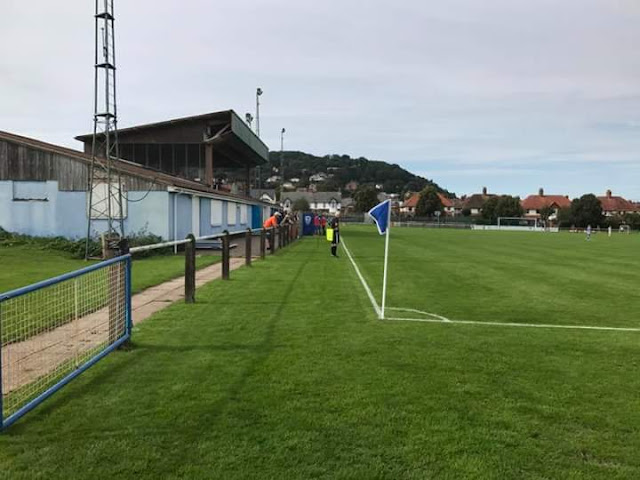 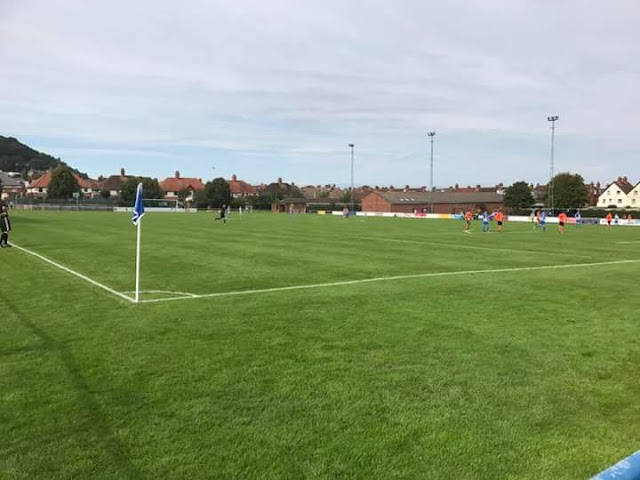 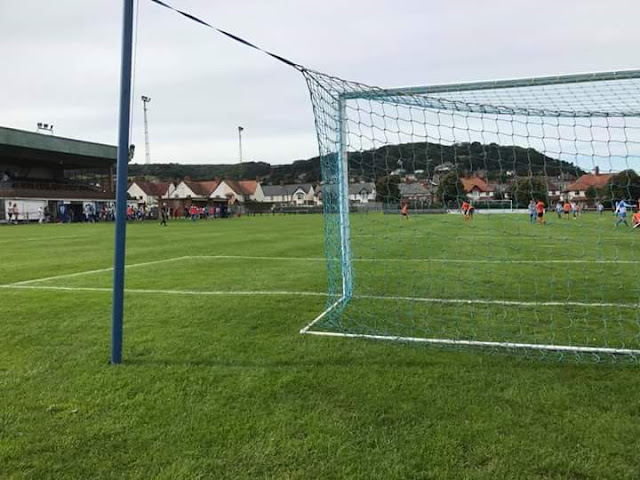 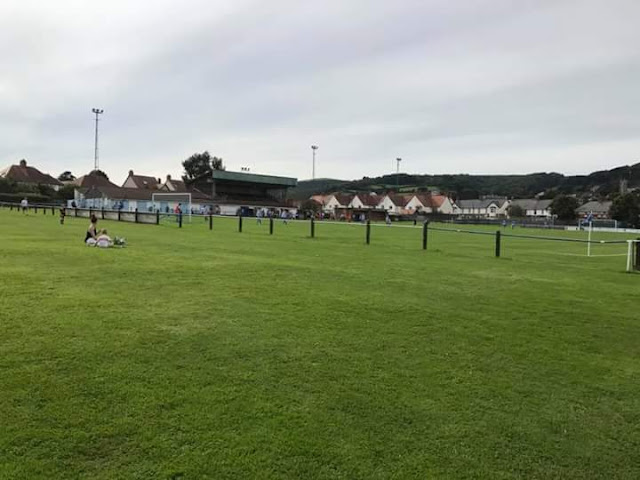