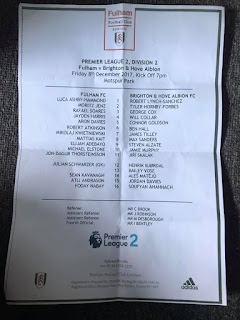 I was much looking forward to Leyton Orient vs Sutton United on Saturday and I was really eager to get in some groundhopping before the game and I had a few options such as Dorking Wanderers vs Tonbridge Angels on Tuesday night and the other option was Fulham FC U23's vs Brighton and Hove Albion U23's on the Friday night and I was very tempted by both fixtures. Dorking Wanderers seemed very appealing because I haven't yet been there but I asked my dad about going there and he said that he didn't really fancy it because we may be going on the 30th for their game against Thurrock so we decided on Sunday night that we would go to Fulham FC U23's instead as it is on Friday night and it will give me something to do instead of staying in on Friday night. 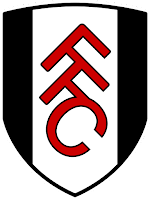 After tweeting that I have decided to go to this fixture, my fellow groundhopping friend Russell (also known as The Wycombe Wanderer) replied saying he needed to visit Motspur Park and he said he was free on Friday night and said that he will come along and this made me even more excited for the game because I haven't seen Russell since my trip to FC Romania back in September. I have been to Motspur Park Training Ground before and that was back in September but I didn't decide to do a blog on my trip there but I recently decided to try and do a blog on there even though it is only a training ground but it does feel more like a county league ground and hence why I want to try and do this blog on my trip there. After deciding to go to Fulham FC U23's, I looked into the history of Fulham FC U23's then I went to bed as I had to be up for college tomorrow. 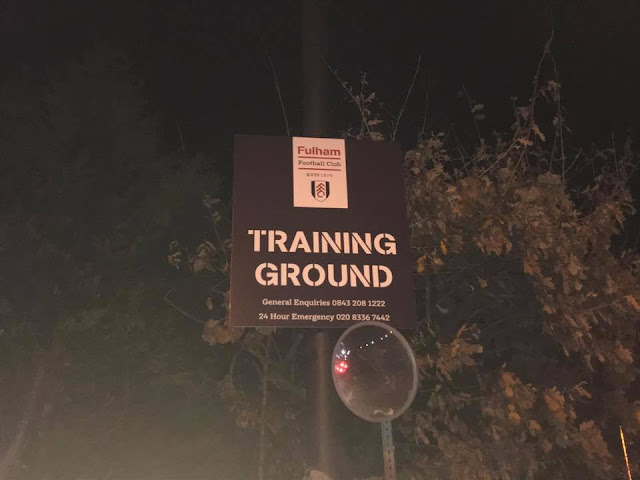 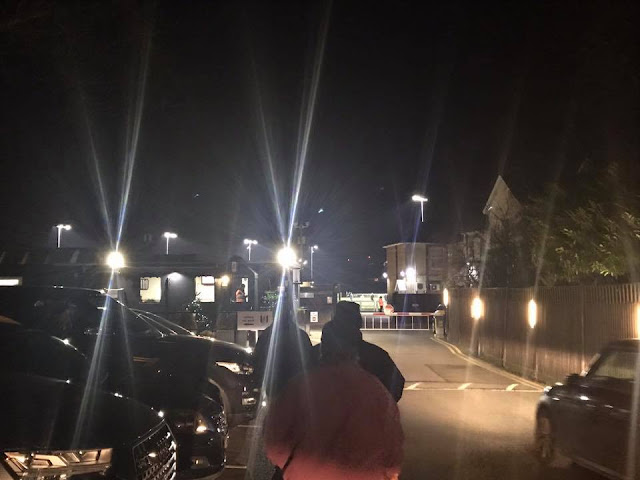 Thursday was quite tough days at college as I had to start two new assignments and get them done before we broke up for Christmas and this meant I was shattered and didn't even get time to do any more of my assignments at home seeing as I had done most of it at college and I was knackered. I woke up on Friday morning at 6:30am and went to college like I do every Friday and today seemed a more chilled out day as it was the last working day of the week but I managed to get quite a lot more of my assignments completed. 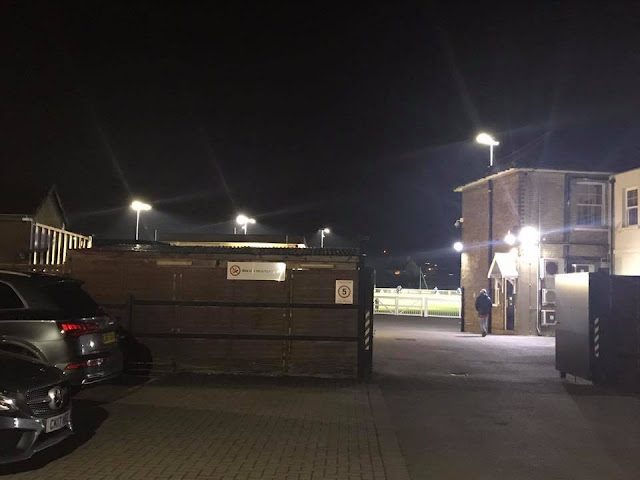 I left college at 4pm and walked to Ewell East Station to get the train to my dad's and seeing as I had only 25p on my Oyster, I topped it up with £2 and then I realised that my train had been delayed and was taken off the train arrivals board which was typically like Southern Rail but my train did eventually arrive 10 minutes late and I stayed on until Hackbridge and then walked 10 minutes to my dad's house. When I arrived at my dad's, he said Tony was coming with us and I said "that's good" and then we left at 5:45pm. 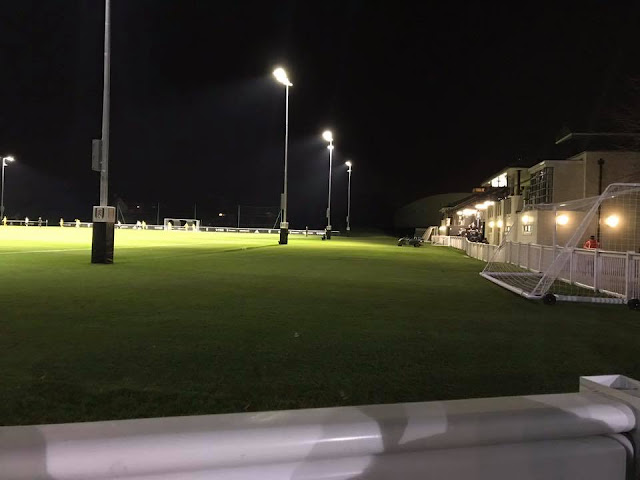 We then picked up Tony and he was also bringing his girlfriend with him and we thought it was quite good because it would up the attendance by one and as people say, "the more the merrier". We then made our short journey to the Motspur Park Training Ground and whilst driving there, we made a short detour down Lower Morden Lane to see if anyone had put up their Christmas lights and a few people had their up already but we wasn't expecting there to be as many as there was. We then continued our journey towards Motspur Park and then we got caught in a little bit of traffic in Worcester Park but it soon cleared and we found ourselves in Motspur Park at 6:30pm. 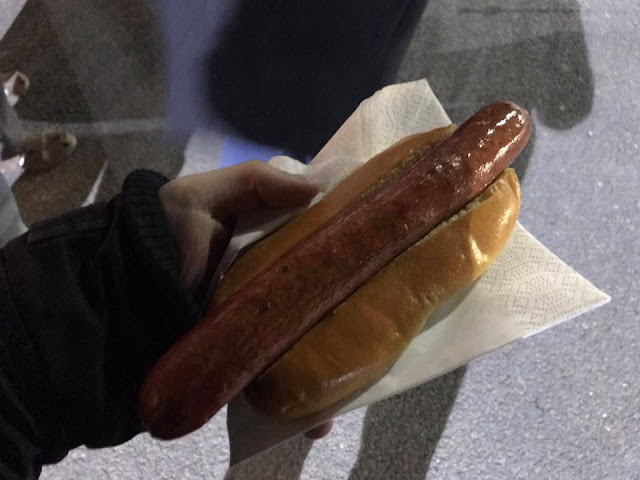 We then found somewhere to park and then walked up to the ground and then took some pictures of the entrance and by now, we had realised that it was a very cold evening and was only 1 degrees in temperature. We then walked into the reception to pay for entry and it was only £3 each and a free team sheet which is very reasonable. We then walked to the burger van to get something hot to eat and drink and I obviously went for a hot chocolate and seeing as I hadn't had dinner yet, I decided to go for a hot dog which for £5 is very expensive. The hot chocolate and hot dog tasted really nice but it was a shame that it was a little overpriced. 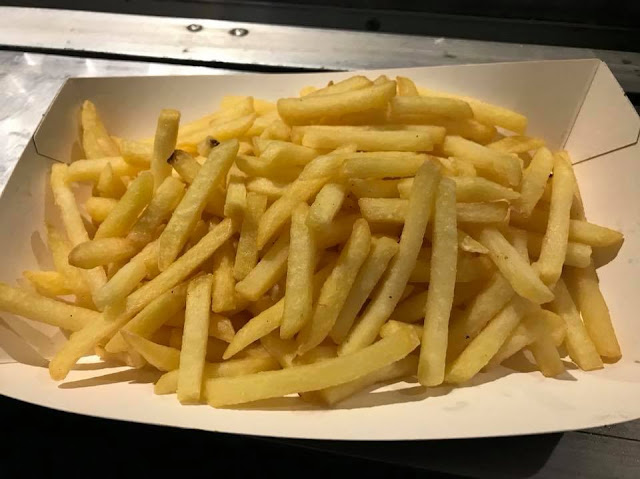 Whilst I was eating, Russell and Jason arrived and we all said "hello" to each other and Jason and Russell got to know each other a bit as they have never met before and it is always good to see two groundhoppers meet and talk about their previous visits to other grounds. After having a quick chat, me and Russell then walked round the ground to get some pictures even though you can only walk around certain parts of the ground. 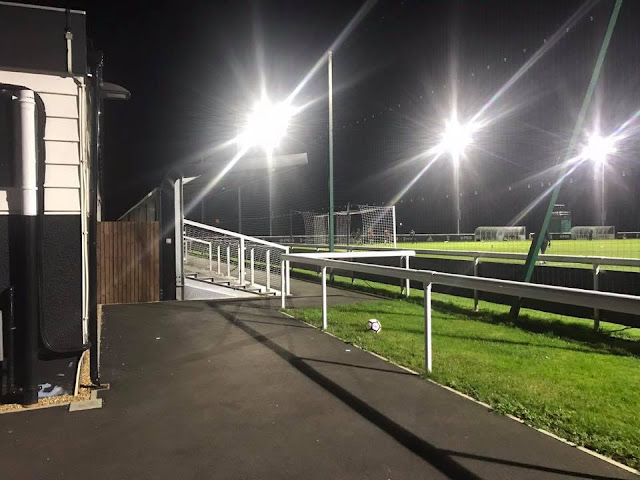 Motspur Park Training Ground has a capacity of around 1,000 and there is around 300 seats. The main feature inside the ground is the main stand which has two seated sections and the seats were taken from the Johnny Haynes Stand at Craven Cottage (Fulham FC stadium). Behind one of the goals is a neat covered terrace and the other parts of the ground are open and are not open for supporters. I quite like Motspur Park as a ground because it would be a good ground for county level (step 9 in English Football) and it has a mixture of a traditional looking main stand and a new covered terrace and it is more than you would expect at a training ground. Russell also said that he quite likes the ground and he said that it was also really good and would fit in at county level. 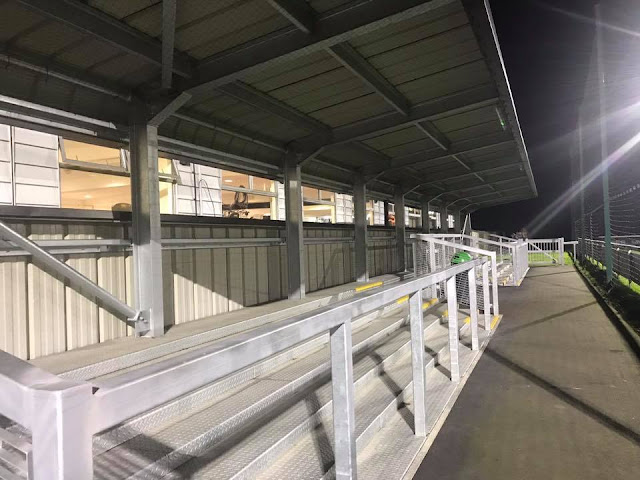 After taking some pictures, me and Russell then went and sat in the main stand to get some pictures when the teams were coming out. It had gotten even colder by now and was even reaching below 0 but we had come well prepared, I was wearing two pairs of socks, gloves and a coat and Russell had some Bovril in his flask to keep him warm, so it wasn't too bad but I suppose that's what makes winter groundhops good, standing out in the cold visiting new grounds or re-visiting grounds. Then before we knew it, the teams came out and me and Russell took some pictures. 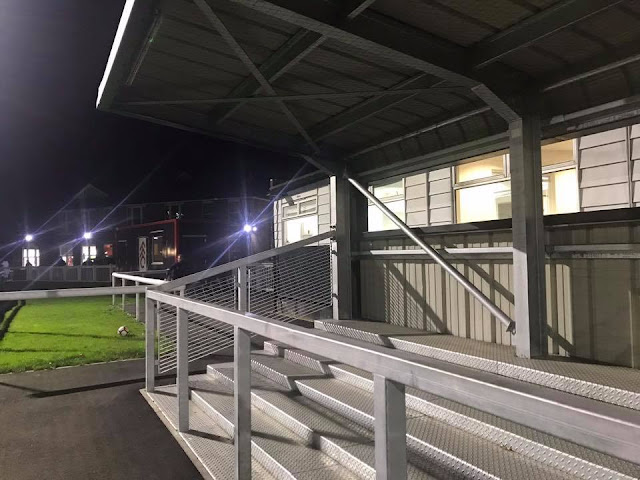 The game started shortly after and it didn't really feel like an U23's game to be completely honest and just felt like an ordinary county league game and both teams didn't really start the game well as there wasn't much to shine from both sides during the first 5-10 minutes. The chances slowly developed as the first half went on and it was Brighton who had a few good chances to take the lead but it was Fulham who were looking like the stronger side and they were creating more dangerous chances and within the first 35 minutes, they should have been at least 2-1 up. Me and Russell headed back towards the burger van just as Fulham's golden chance arrived as one of their players hit the ball from a decent distance and went right into the side of the net and it was1-0 to Fulham U23's with a few minutes of the first half left. 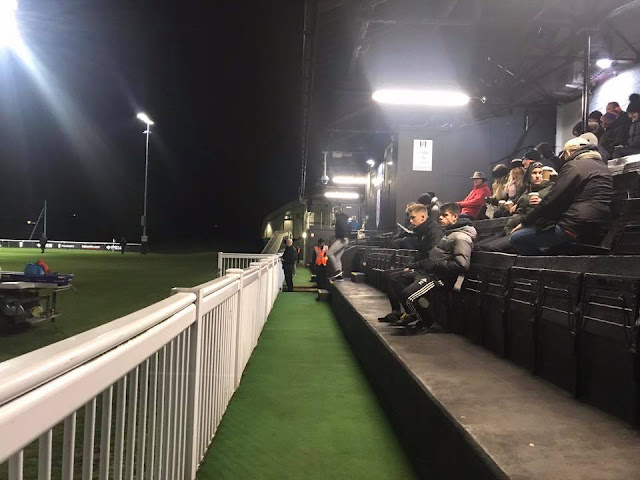 Half time and it was 1-0 to the home side and they deserved to be 1-0 up and it had gotten quite a bit colder but it wasn't putting us off too much but its part of the whole experience of groundhopping in December. We went back to the burger van and I decided to get another hot chocolate and I also decided to get a portion of chips and for £2, the portion was rather large and they tasted really nice and I would definitely recommend getting a portion of chips if you ever find yourself at Motspur Park. We then went and stood by the covered terrace behind the goal and had another chat about groundhopping. 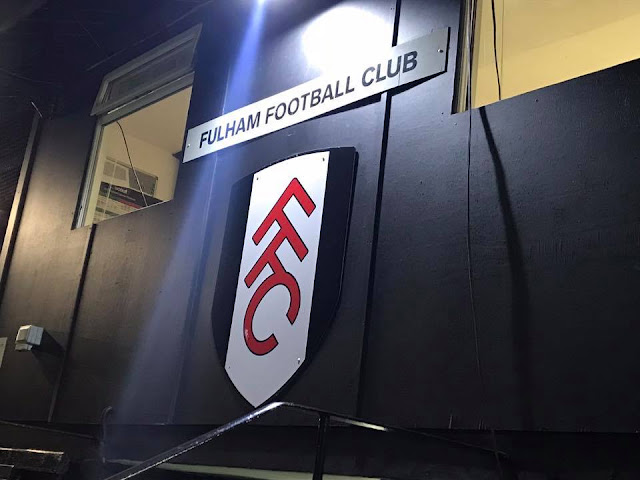 The players came back out and there were quite a few Fulham fans behind the goal but I wasn't expecting any songs or chants because it is a U23's game but it was good to see that Fulham fans actually cared about the U23's. Anyway back to the game and the second half had just started and Fulham seemed to have raised their confidence as they started to dominate the game and were creating a lot of chances and they weren't letting Brighton into the game. 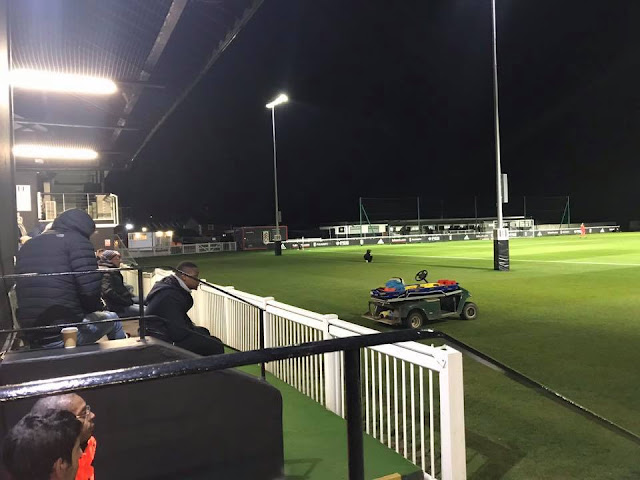 Fulham had a good two or three chances to further their lead to 2-0 but they didn't take those chances and as the game went on, it gold colder for us but warmer for the players but I wasn't moaning because I love groundhopping whether or not it is cold or warm. Brighton slowly got themselves back into the game within the last 15 minutes and they were rewarded because they managed to find the equaliser to make it 1-1 in the 85th minute. Both teams were now going for the three points and there was a few more chances but the game finished Fulham FC U23's 1-1 Brighton and Hove U23's. 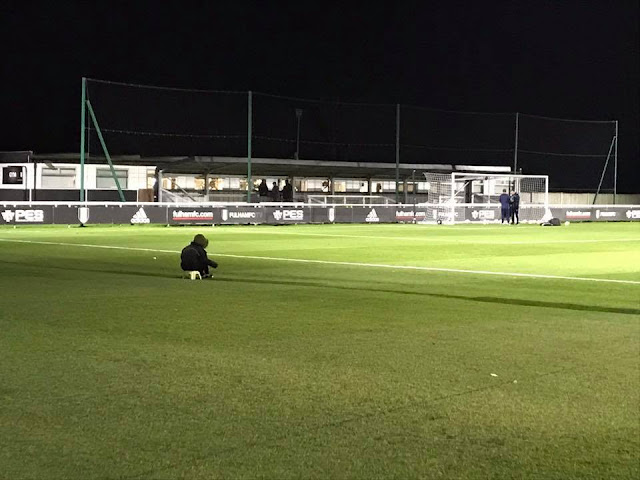 We then said goodbye to Russell and Jason and then walked back to the car and then my dad dropped me off home and I then watched a few episodes of `The Big Bang Theory` and updated my social media before going to bed at 11:30pm feeling tired but I had really enjoyed meeting Jason and Russell again and if you ever have the chance to visit Motspur Park Training Ground, I would recommend it because it is cheap in terms of admission and the ground is decent for an U23's ground and if you live locally, you could do a visit there for under £15 but the only bad thing is the food is a little bit too expensive but I would recommend going there! You can find Russell's blog on this game here! 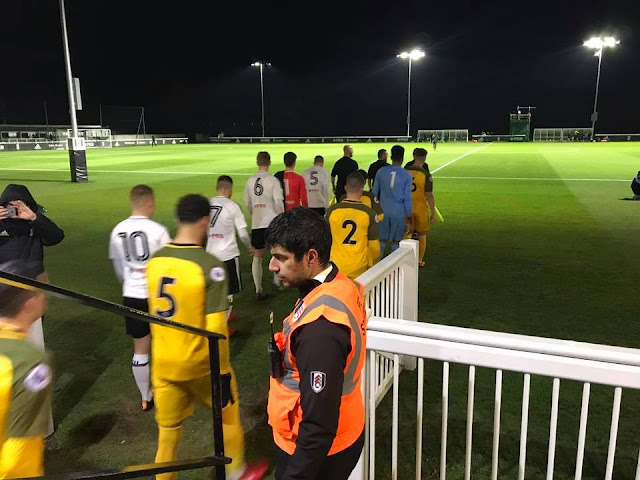 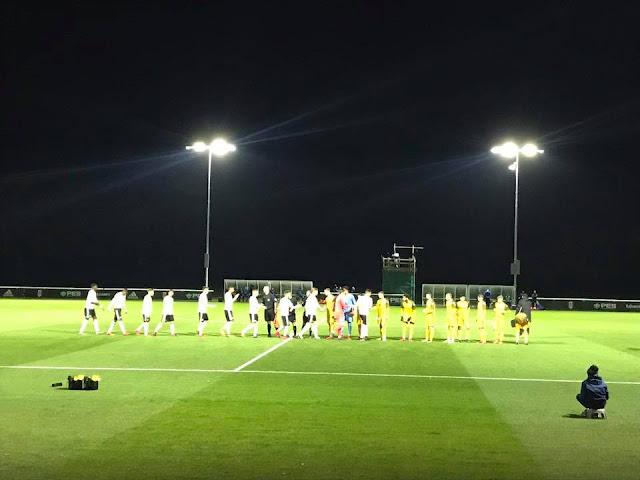 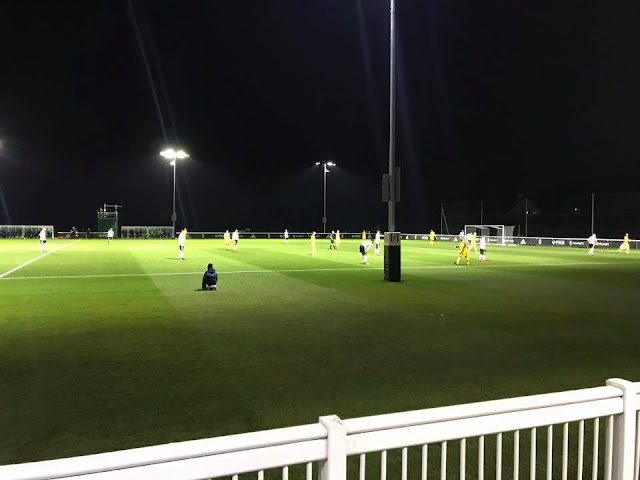 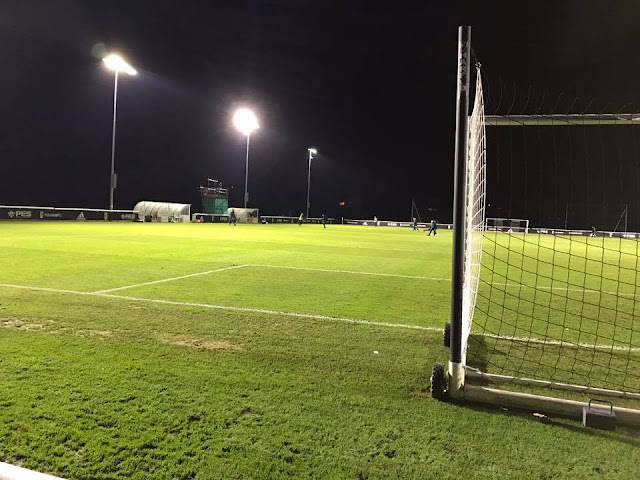 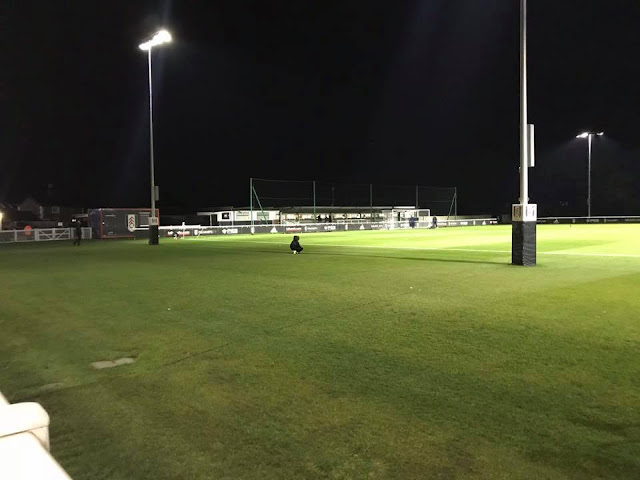 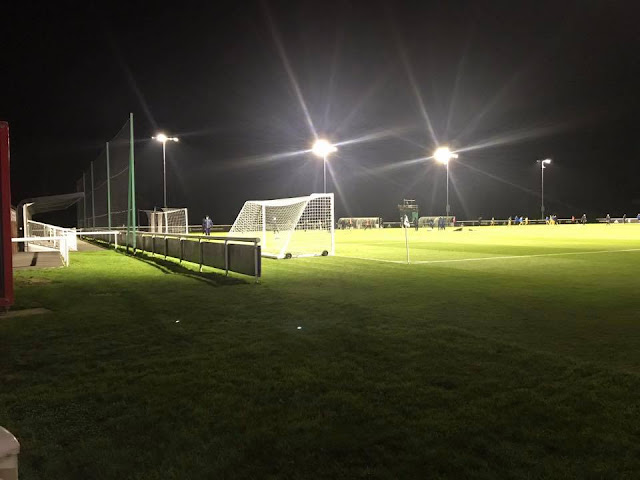 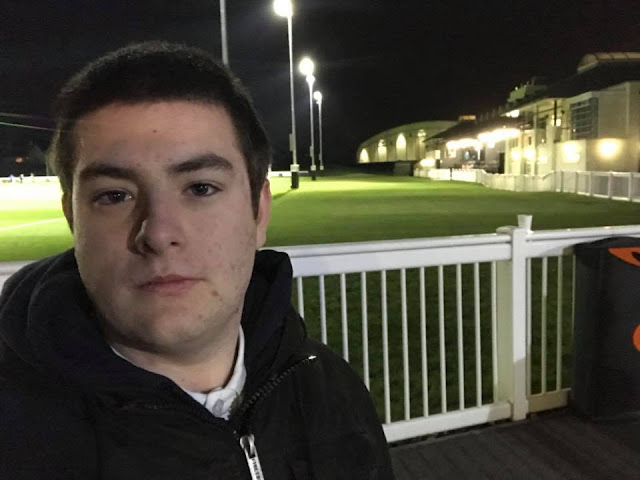 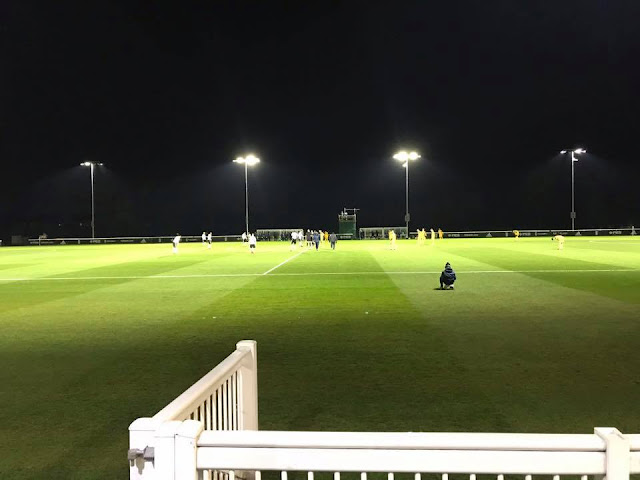 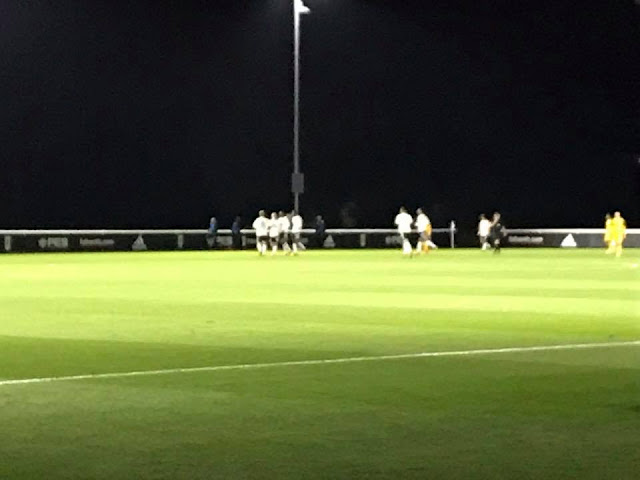 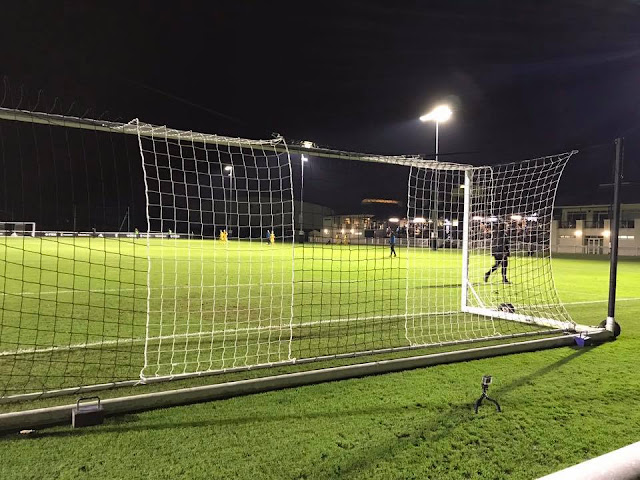 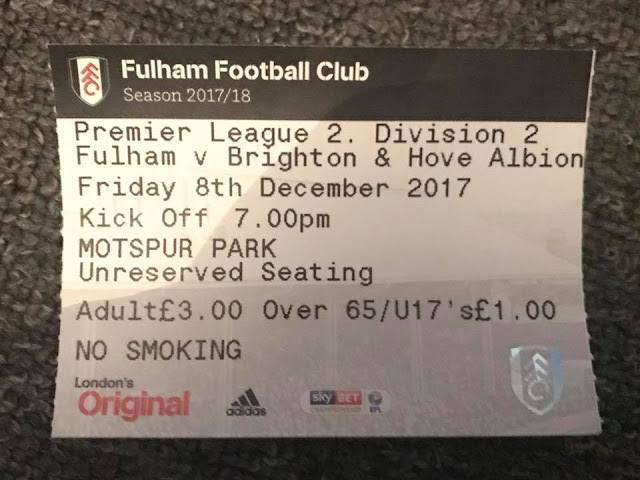