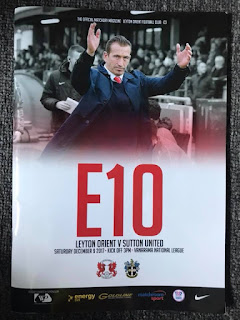 There are two types of an away day, the first type is the typical long away game of waking up at 5am and being on a train for hours and then possibly staying the night and the second type of away game is the local away game where you are facing a local side, sometimes in the same city or county as you and you can get there just an hour or two before kick off and get home within an hour or so after the game and this weekend was a more local away game as Sutton were facing London neighbours Leyton Orient. 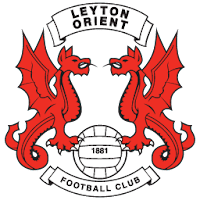 There has never really been a rivalry between Leyton Orient and Sutton and I suppose the chances of there ever being one is very slim as Sutton only generally have rivals who are very local such as Carshalton Athletic, Kingstonian, Bromley and Tooting and Mitcham but apart from that, we have never really had any rivalry with any other teams in the London area and this is something I am quite proud of because a few London teams have rivalries with every other team in London and this makes us different from those teams. 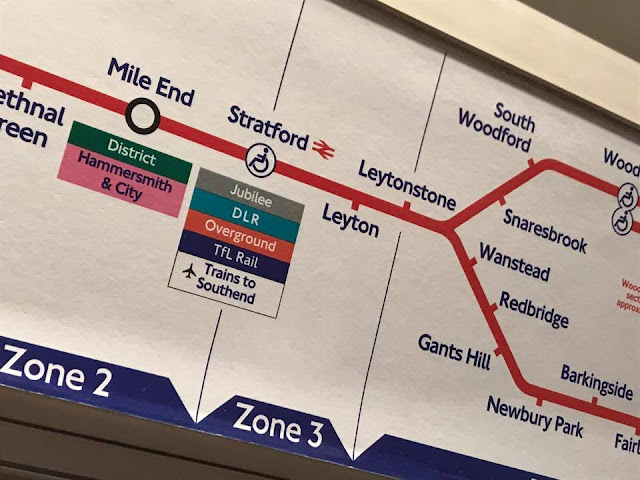 So anyway back to the game and we were facing Leyton Orient away this weekend and it is a game I have been looking forward to since the fixtures have been announced because I have never been to Brisbane Road and it has also been on my top list of grounds to visit and I would finally get the chance to go there and what will make the visit more special is I will be watching Sutton play there! 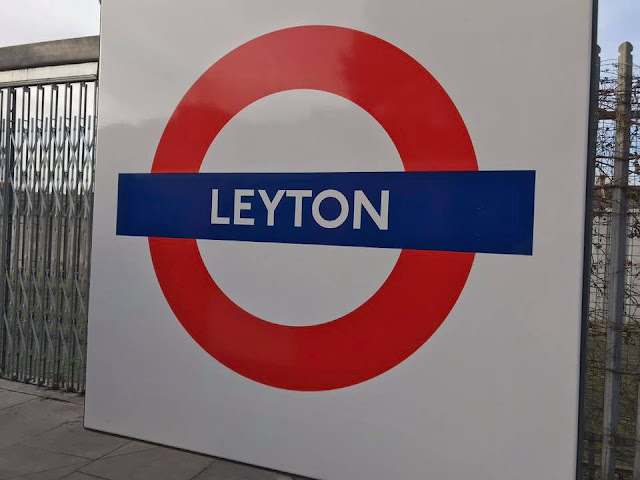 The week running up to the game was spent at college like normal but there was a festive mood in college as it is now December and the teachers just play Christmas songs and even though I was given two new assignments towards the end of the week, I found them quite easy to start and this put me in a good mood. Friday night was spent at Fulham FC U23's vs Brighton and Hove Albion U23's and you can find my blog on my trip there here. 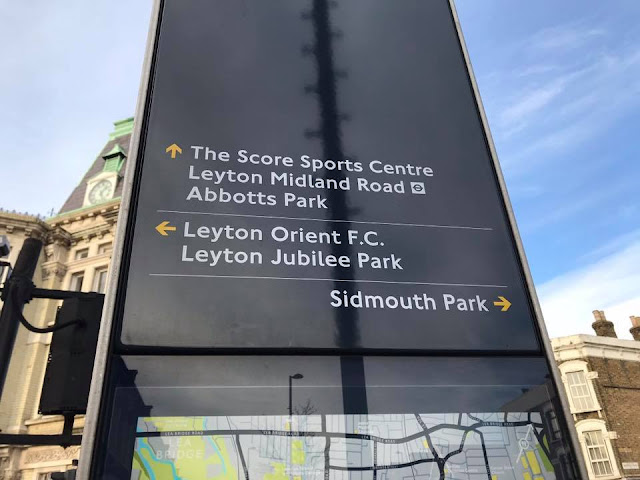 After getting back from Fulham FC U23's vs Brighton and Hove Albion U23's, I went and did some more of my assignments as I wanted a bit of a more chilled weekend rather than spent my Sunday doing assignments and after doing my assignments for around an hour or so, I managed to catch up on a couple of episodes of The Big Bang Theory and then I looked into the history of Leyton Orient FC before I went to bed. 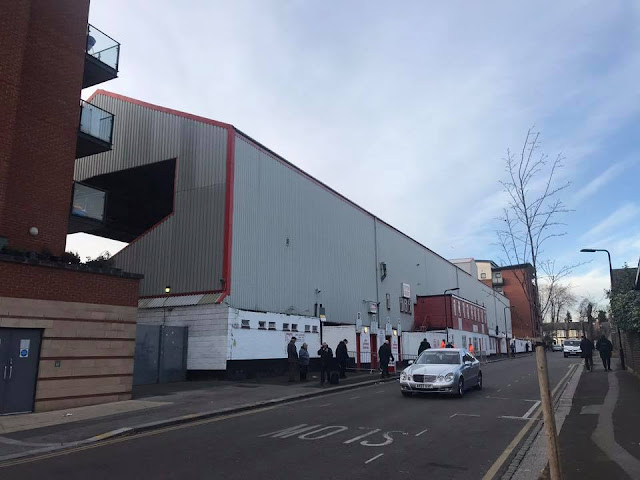 Leyton Orient F.C. were founded in 1881 as Eagle Cricket Club and their nickname is `The O's`. The club are based in Leyton in East London and play their home games at Brisbane Road (Matchroom Stadium for sponsorship) and it is a 9,271 all seated stadium. The club originally started out in the London League in 1896 and joined many small leagues in their early years and in the 1905/06 season, they were elected to join the Football League Division Two. In 1929, they were relegated to the Division Three South and in the 1939/40 season, the football league programme was abandoned and in 1946, they changed their name to Leyton Orient. In the 1955/56 season, they were Division Three South champions and were promoted to Division Two. 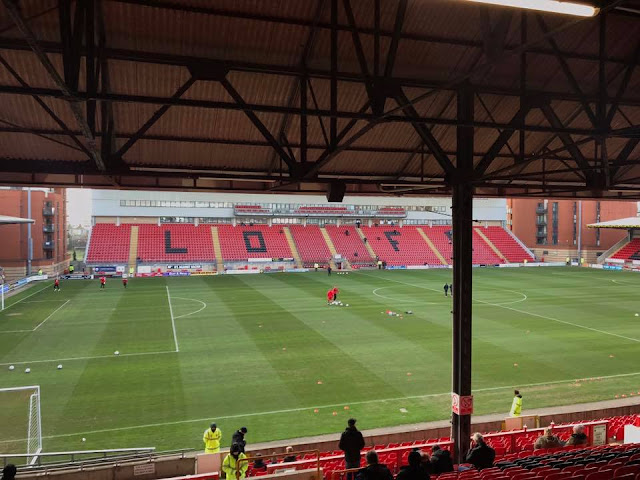 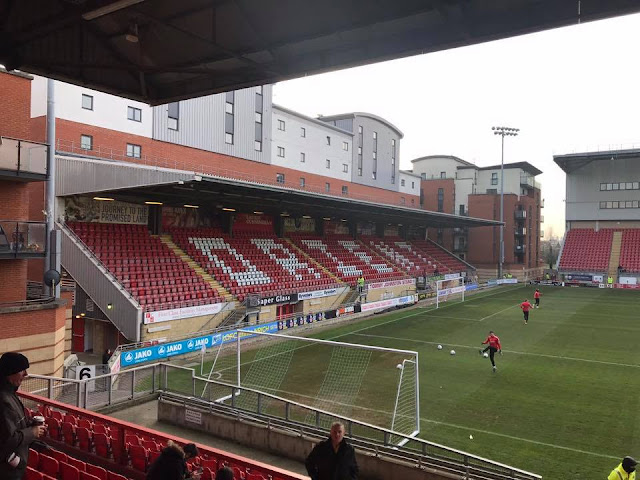 I woke up at 8:15am at Saturday morning and spent a good hour in bed on my phone mainly on social media and then had some breakfast which was just a bowl of cereal and I then had a nice refreshing bath. I then played some Football Manager 2018 and also managed to watch some previous highlights from Leyton Orient's games this season and by the time I had finished doing all this, it was now midday and I was getting ready to leave because my dad was finishing work in 30 minutes and I was going to meet him at South Wimbledon station. 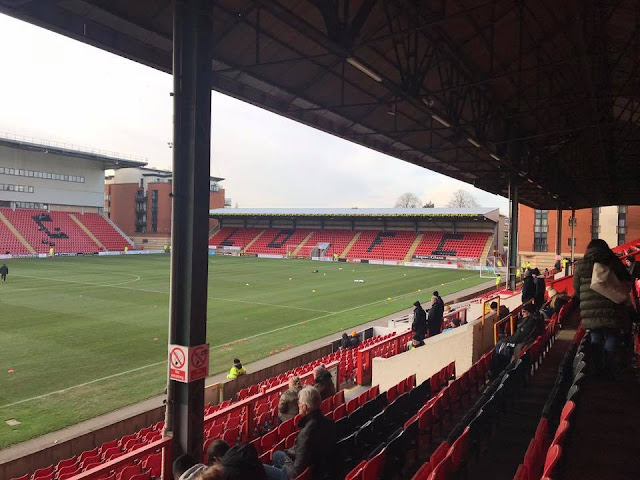 My dad then messaged me to say that he had finished work so I got my things ready and then left my house to meet my dad at South Wimbledon station. My dad parked up in the industrial estate by the station and then walked up and we was at the station at 1pm. I the put £5 on my Oyster and then got on the tube and stayed on until Bank and then changed onto the Central Line and stayed on until Leyton which is only 5 stations from Bank. Once we arrived into Leyton at 1:55pm, there was quite a few Sutton fans who were getting off the train and there were a few faces that I recognised. 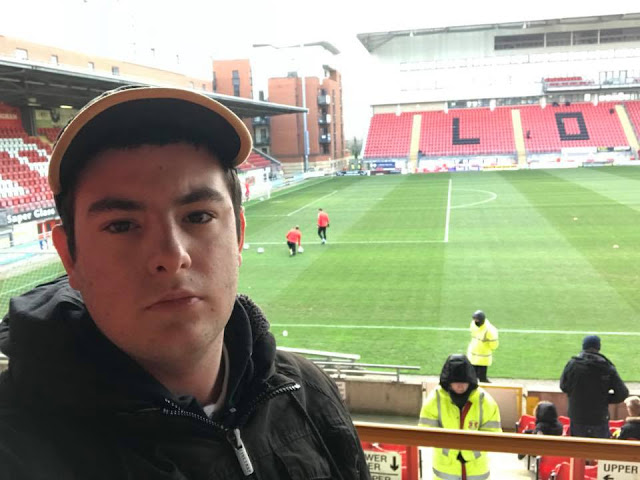 We then walked to Brisbane Road which is only a 5-10 minute walk away from Leyton Tube Station. Once we arrived at Brisbane Road, we took some pictures and then was searched by security and then paid to get in and for me and my dad, it was £38 which is a bit expensive but I'll pay anything to watch my team. Once inside Brisbane Road, we had a chat with some of the other Sutton fans and then purchased a match day programme for £3 and then got a bottle of water to have during the game. We then went inside the stadium and then I had a talk with Harry, Liam, Toby and a few others. We ended up talking for about 10 minutes and then I went nearer the pitch to take some pictures of the stadium. 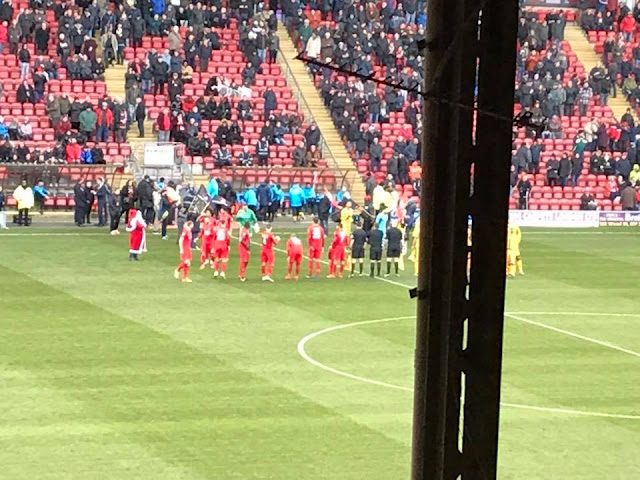 Brisbane Road has a capacity of 9.271 and is an all seated stadium. At one end is the single tiered, Tommy Johnston Stand that was opened in 1999. The old Main Stand has been reduced in length, but is still a fair size. This partly covered stand is now all seated after having seating installed on the former front terrace. It has several supporting pillars and the roof doesn't quite cover all of the front seating. It does though have an interesting gable on its roof which has 'Leyton Orient' proudly emblazoned across it and gives a nice link to the Club's history. Opposite is the new West Stand which is an all seated stand which has a capacity of 2,872 and also holds the club offices.At the North End is the ground is the most recent addition to the stadium. The North Stand was opened at the beginning of the 2007/08 season is a simple looking covered all seated stand. The ground also has a set of four modern looking floodlight pylons. (Description of Brisbane Road is sourced from Football Ground Guide). 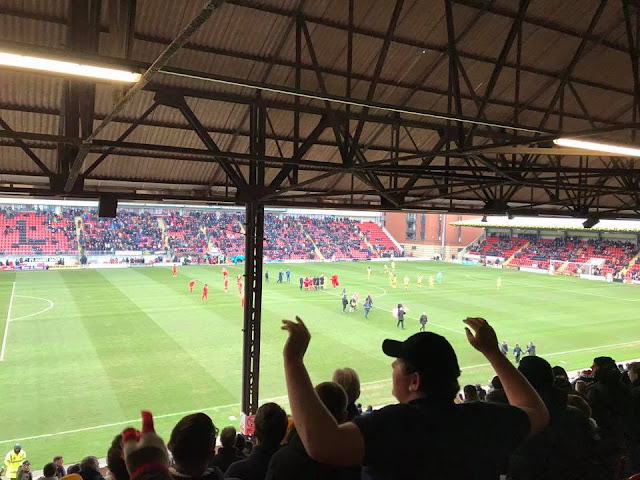 I quite like Brisbane Road, it is quite a simple stadium and I also like how it is an all seated stadium and even though I generally prefer to see some terracing, I wasn't displeased that there wasn't any terracing. I like the stand that we were located in because it is quite old and also has a nice appearance and I really like the seated stands behind the goals and I have to say, the new main stand looks very unique and quite impressive. 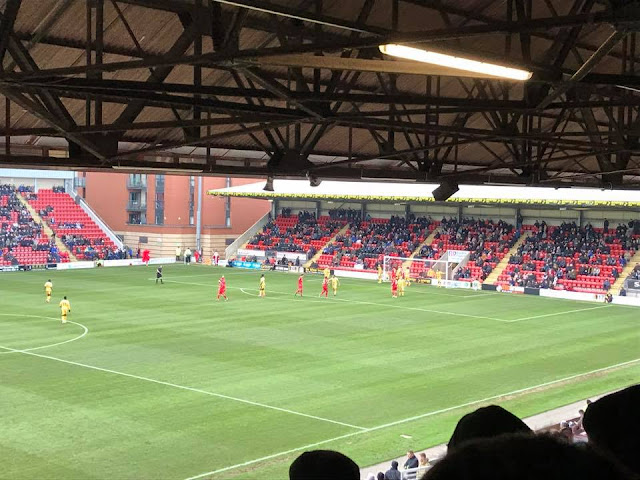 After taking some pictures of the stadium, I went and sat with my dad and then my nan, granddad, Uncle Kevin, Mikey and Uncle Ben arrived and I then chatted to them and also gave Ben his birthday cards as it is his birthday today. By the time he had opened them it was approaching 2:45pm so I went back up to the top of the stand with Harry, Toby and the others and then continued to talk about the game that was only minutes away and when the teams came out, there was a loud roar from the 4,000 or so people inside the ground. I then took some pictures of the teams and then the travelling 443 Sutton fans started chanting. 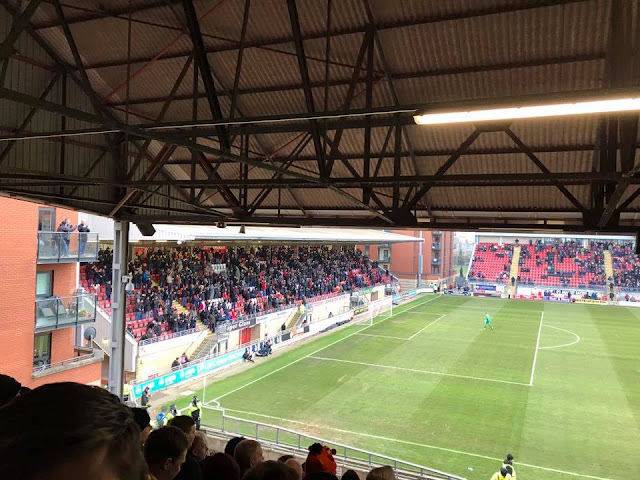 The first half started and it seemed like it was Leyton Orient who were the more confident side even though they were 19 places below Sutton and `The O's` had appointed a new manager last week and they lost their last game away to Solihull but it seemed like they were starting to get to grips with their new manager as they created a few chances within the first few minutes but the main turning point in the game was in the 6th minute when Simon Walton took one of Leyton's players down and they were given a penalty and Bonne put Orient 1-0 up. 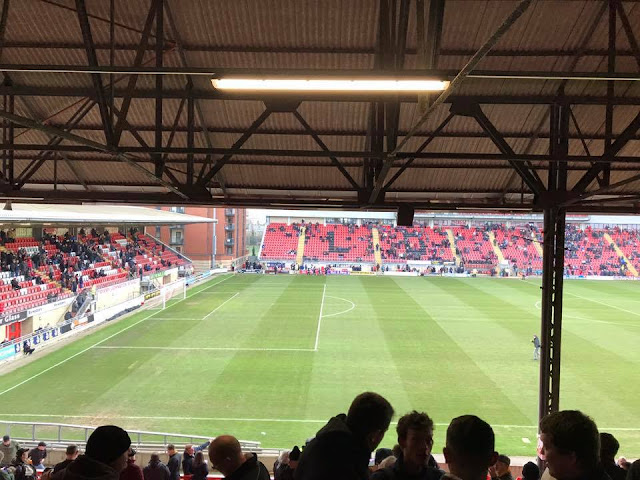 Sutton reacted quickly after going 1-0 down and had a golden chance to equalise but Ross Lafayette failed to score after being through on goal and we continued to create chances and be dangerous especially on the wing with Cadogan and Bolarinwa and I was very surprised that we didn't find the equaliser within the first 30 minutes of the game. Leyton Orient also had chances to extend their lead but Sutton was able to keep it just at 1-0 and despite having chances to get back into the game, we were still 1-0 down at half time. 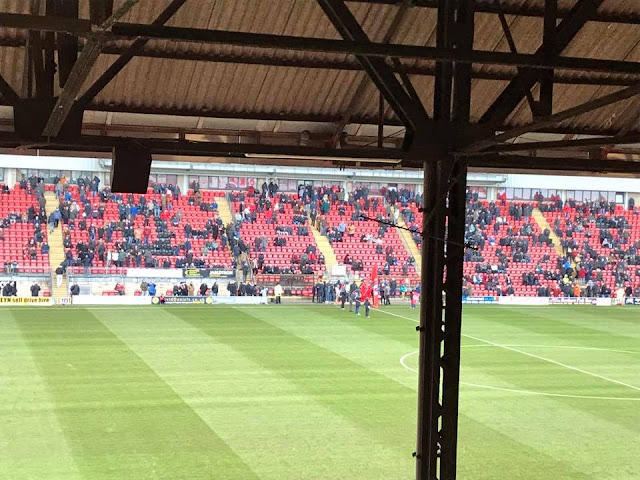 So half time and it was 1-0 to Leyton Orient and they didn't deserve to be winning because we had dominated the first half but that's football, if you don't take your chances, then you could find yourselves behind even if you've dominated the game. We went and got something to eat and I went for a beef and onion pie as it was only £2.80 which is very reasonable and I also went for another bottle of water. I then went back up to the stand and eat my pie and it tasted quite nice but it was really good especially for £2.80! The players then came back out and both sets of fans roared! 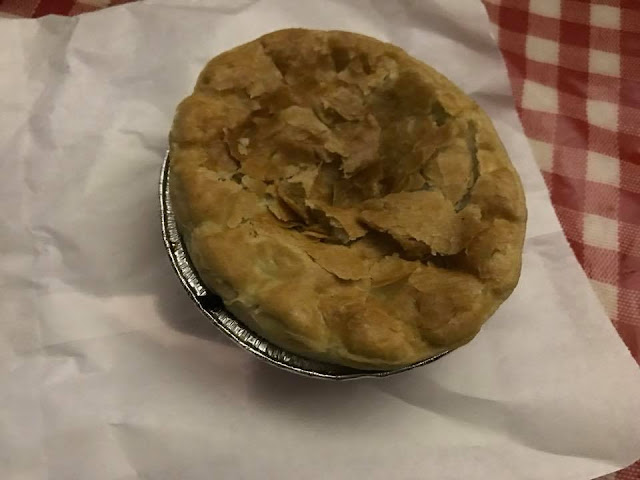 The second half started and it seemed like Leyton Orient had been feeding off Sutton's confidence from their great performance during the majority of the first half and Orient were rewarded as they scored again in the 54th minute and Sutton found themselves 2-0 down. This really didn't help Sutton because we were really struggling to create chances and also our passing wasn't very good and we looked like a completely different side to what we were in the first half. 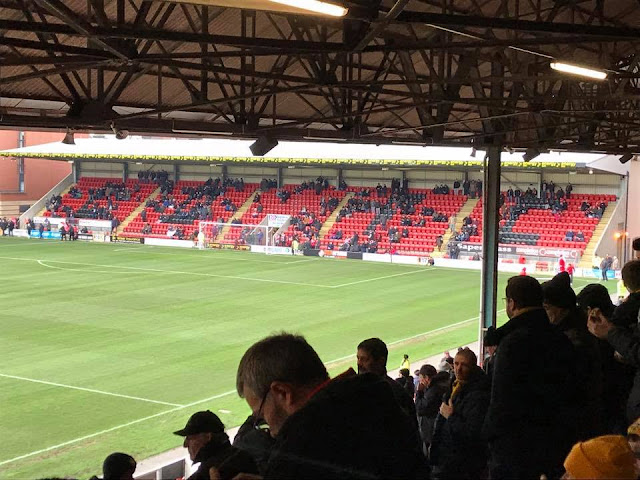 Things continued to get worse for `The U's` as we conceded again in the 81st minute via Donne and it was pretty much game over now but only 3 minutes later, Tommy Wright got on the score sheet and made it 3-1 and Sutton had a lifeline to try and get back in the game but 4 minutes later, Dayton scored to make it 4-1 to Leyton Orient and `The O's` played the game out and it finished Leyton Orient 4-1 Sutton United. We clapped the players off and then walked back to the tube station with Tony and it was very busy and it seemed like everyone in the ground was going to Leyton tube station. Anyway, we got to the station at 5pm and managed to get straight on the tube and stayed on until Bank and then walked to the Northern Line and then once on the tube heading towards South West London, we got talking to an old Sutton fan and we talked about the game today and what improvements we could make to Gander Green Lane. 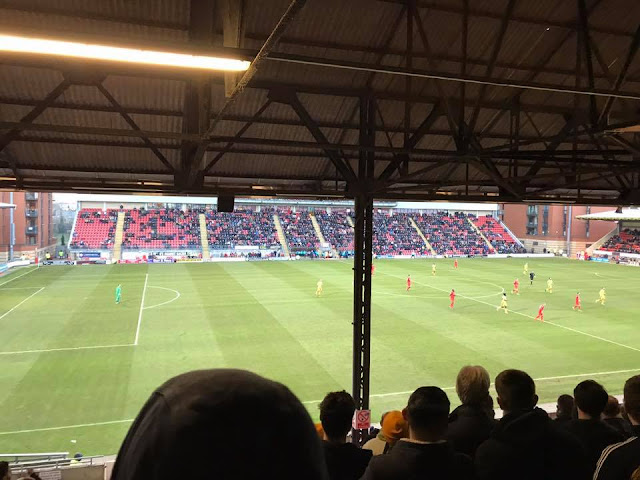 We then got off at South Wimbledon, walked to the car and then my dad dropped me off home and then I had some pizza for dinner and then went to bed at 11:30pm feeling very tired and exhausted! I would recommend going to Leyton Orient because it is a good stadium and the atmosphere isn't too bad and the club is quite friendly but as an away fan, you will not feel it is a very friendly club but if you go in the home end, it is probably one of the most friendly clubs around. The other downside is it is a bit expensive but they are an ex-football league club so it is a bit understandable. 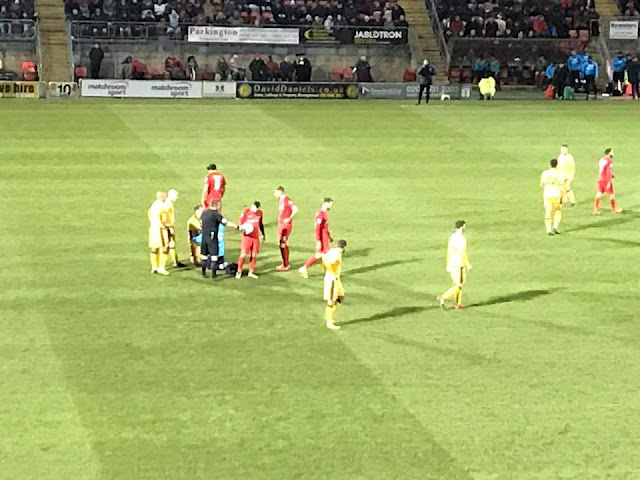 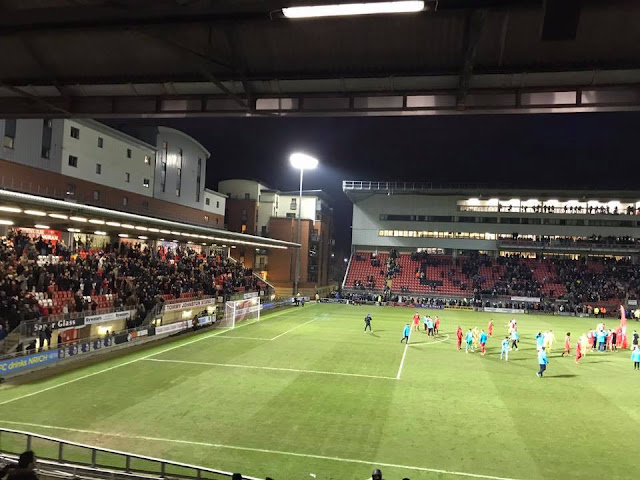 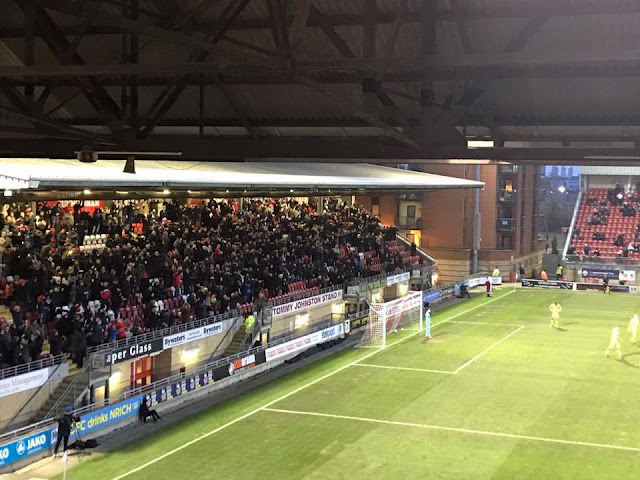 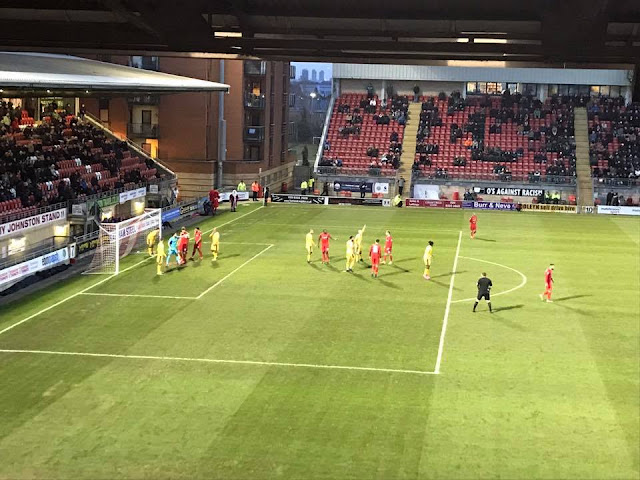 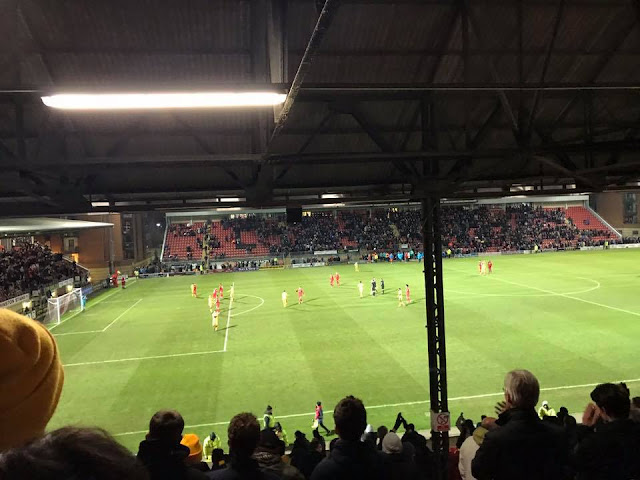