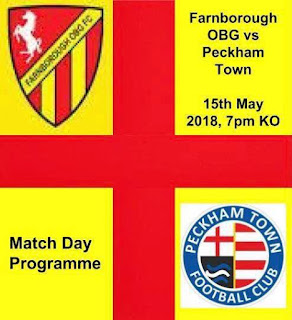 When I groundhopped to Staines Lammas a few weeks ago which you can read about here, my friend Jason told us that the Kent County League is still being played and a team called Farnborough OGB (Old Boys Guild) FC are playing at home to Peckham Town on the 15th May and on that night, we all agreed that we should go to this game as it would be good to tick off another ground and especially seeing as it is within the M25! 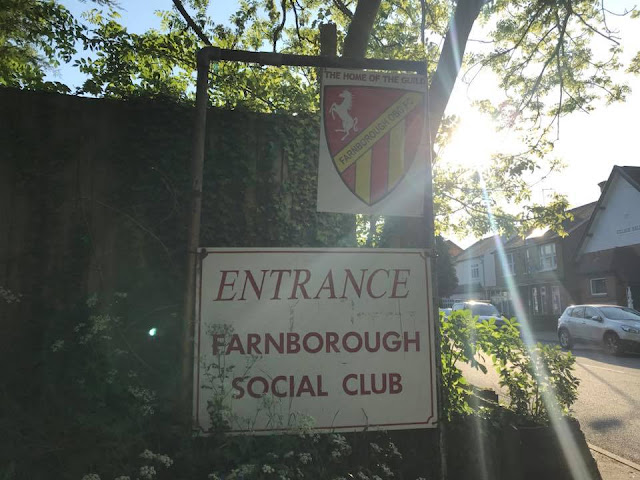 Since that night, I have had the 15th May marked on my calendar for this fixture and I was actually quite excited but also a bit upset for this game because it would be another ground within the M25 visited but would probably be my last groundhop of the season but this season has been great for my blog and for visiting new grounds so it would be good to add the Farnborough Sports Club to my list of grounds visited this season. It would also be Ground 82 for me and Ground 80 on my blog. 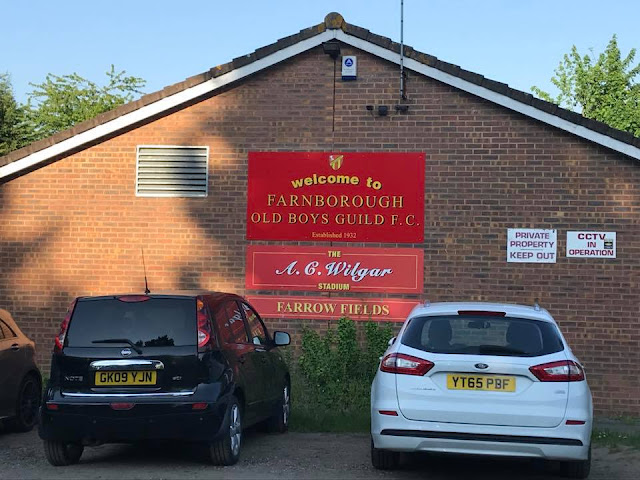 The week before the game was mainly spent at college and the weekend was mainly spent groundhopping to Glanford Park for Scunthorpe United vs Rotherham United which you can read about here and Sunday was spent just chilling out from our 20 hour long day on Saturday. Monday was spent doing little bits of updates on my laptop and helping our round the house and then chilling in bed and then just before I went to bed, I looked into the history of Farnborough OBG FC. 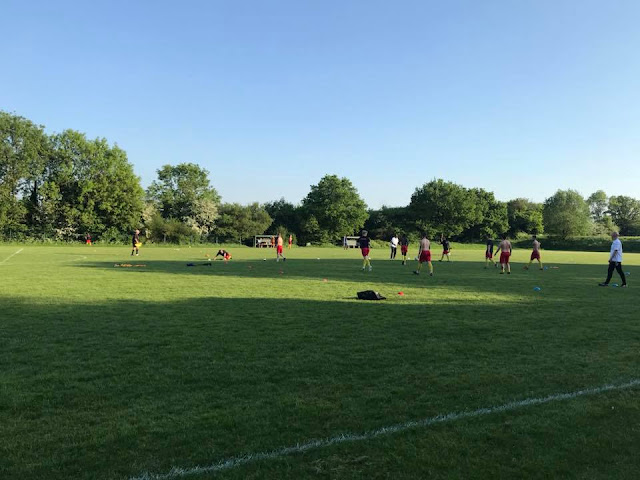 Farnborough OBG FC was formed in 1932 school team for winter games and the club's nickname is 'The Guild'. The club currently play in the Kent County League (England's 11th Tier) and the club currently play their home games at the Farnborough Sports Club which has a capacity of around 300 and there are no seats. The club started out in the Bromley and District League and throughout the 1930's, the club competed in the Downe League and Cup. Unfortunately no league data can be found from 1939 to 1977 but in 1978, the club spent one season in the Kent County FA and then spent 3 years in the South London Alliance League and since 2001, the club have been competing in the Kent County League. 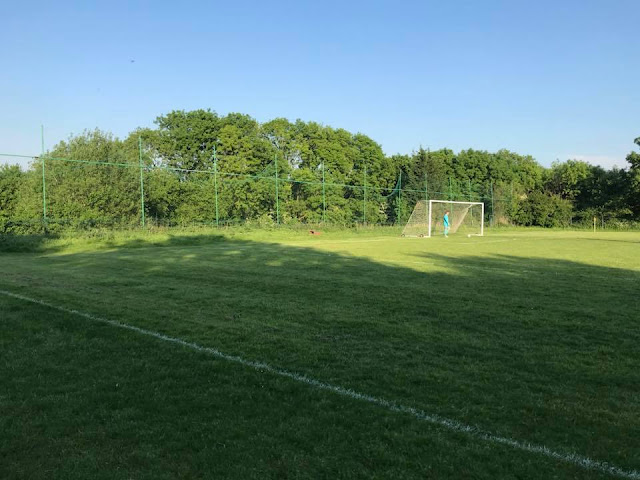 I woke up this morning at 8am and had a quick wash and some breakfast and then took my little sisters to school and then chilled for the rest of the morning and then left for college at 12:20pm and then I got a lift to college from my friend Emma and today, college wasn't too bad but we had started our last assignment and it was quite tricky so it wasn't a chilled day but I just got on with it. I finished college at 4:15pm and then my dad picked me up from college at 4:30pm and then we quickly stopped in McDonalds to get some dinner and I went for the New York Stack meal and my dad went for his normal McChicken Sandwich meal and then after we had our dinner, we drove up the road to Jason's house as he is coming with us today and is driving us to the game. 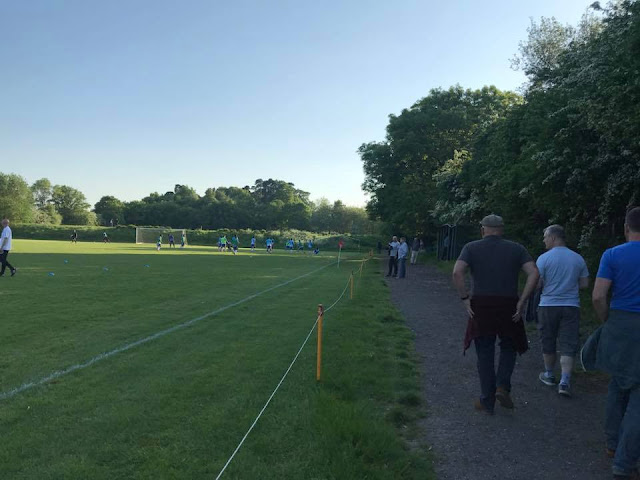 We got to Jason's at 5:15pm and then we all got in his car and then drove up to Gander Green Lane and picked up Geoff who is a well known Sutton fan and he was featured in blog on my visit to Raynes Park Vale which you can read about here and my trip to Worcester Park FC which you can read about here. After picking up Geoff, we made the hour or so drive to Farnborough Village and got caught in some traffic in Croydon but we soon passed it all and then after being in the car for just over an hour, we arrived at the Farnborough Sports Club at 6:35pm. 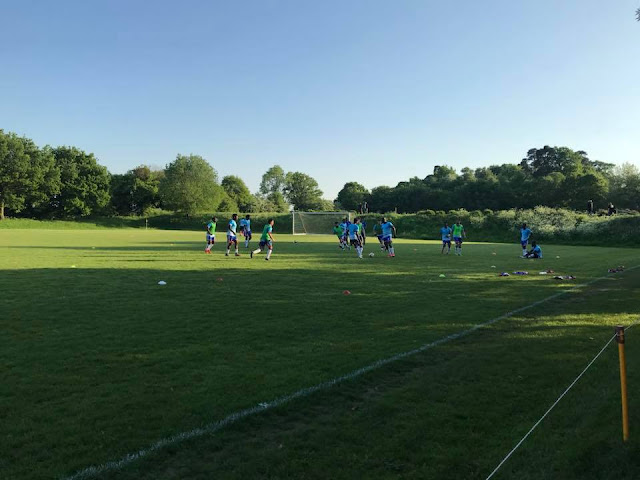 We found somewhere to park and then walked up to the ground and took some pictures of the signage for the ground and went in the bar and it is a decent size but there aren't many facilities with just a serving area for food and drinks and no pool table or dart board which was unfortunate. Geoff, my dad and Jason decided to get a drink but I myself didn't really fancy anything and then with 5 minutes before kick off, we walked up to the ground itself and walked round and took some pictures and we was feeling very happy because today's entry was free. 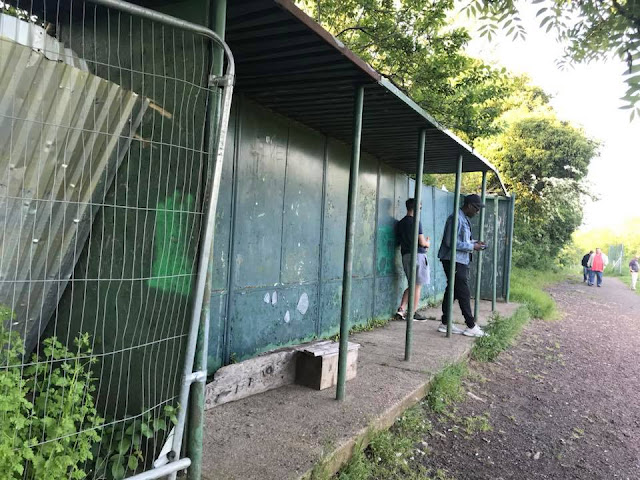 The Farnborough Sports Club has a capacity of around 300 and there are no seats. The ground is only two sided with one side being along the pitch and being mainly open except for an old covered bus shelter that was donated to the club and can hold around 20 spectators and behind one of the goals is a some banking and provides a great view of the pitch. For a Step 11 ground, it does what it needs to and the bus shelter adds character to the ground and for the level, it is an alright ground but it would be nice to see a small seated stand put in place. We then found some other Peckham supporters and stood with them and then the game began. 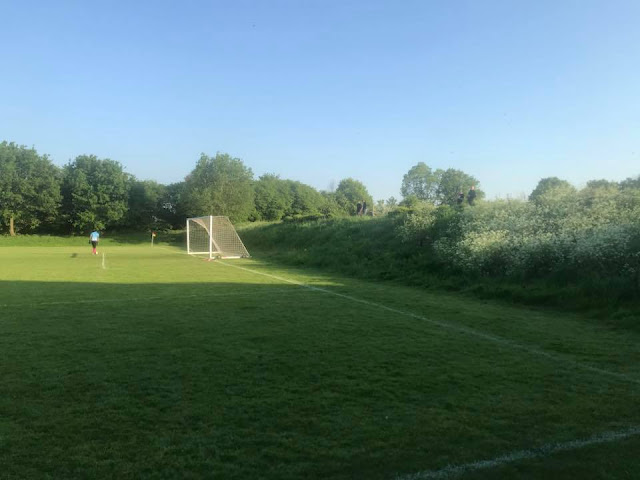 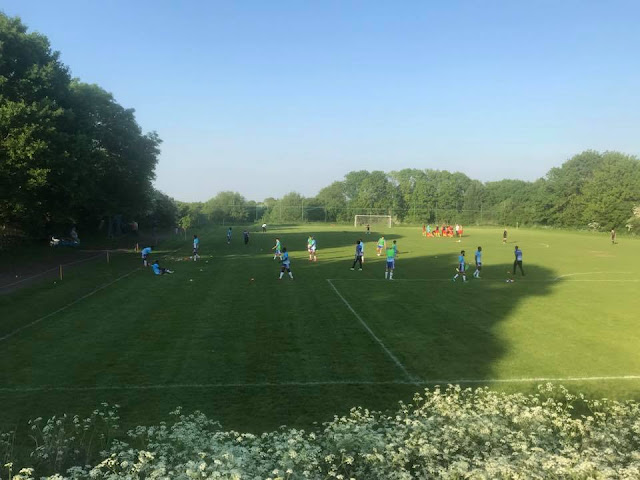 Half time and it was Farnborough Old Boys Guild 2-0 Peckham Town, so far it had been a really good game with two goals and plenty of chances being created. We clapped off both teams and then quickly went down to the bar and I got a diet coke and I asked if they had any hot food but unfortunately they didn't so just a packet of crisps for me which is better than nothing. Geoff and Jason also got themselves another drink and we all then went back up to the ground with our drinks and had another chat with the Peckham fans that we were standing with and then the second half started. 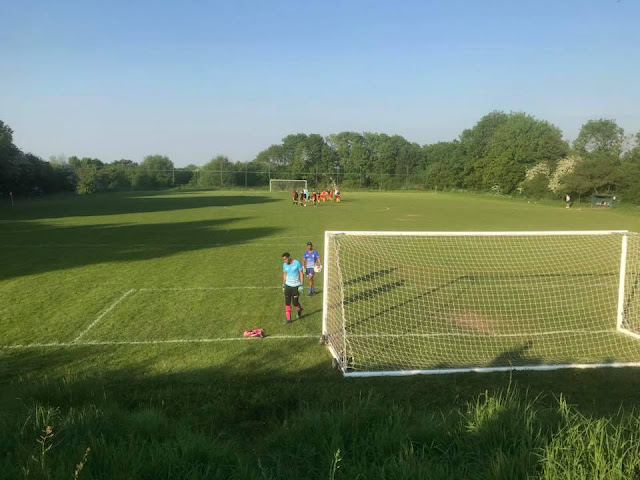 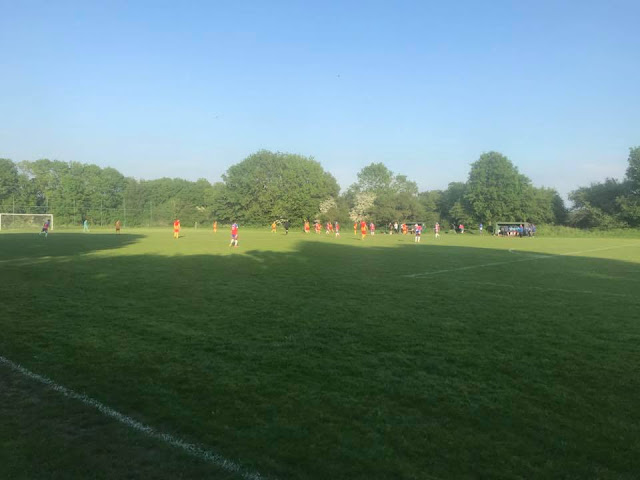 We walked out of the ground feeling happy that we had visited another ground and was another ground nearer to 100 and had visited another ground within the M25 and it had cost us under £10 and we had seen 4 goals and was a good evening out with our friends and had made some more friends. We left the ground at 8:45pm and then made the 14 mile journey home and then dropped Geoff off home and got back to Jason's at 9:30pm and we said goodbye to Jason and then my dad dropped me off home at 9:45pm and I spent some time chilling and then went to bed. 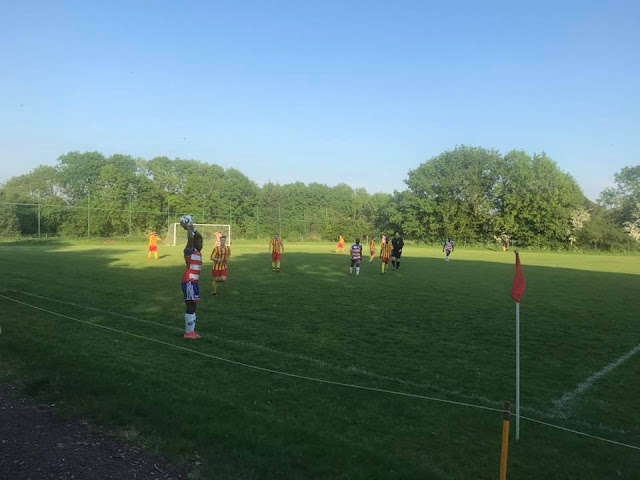 I would recommend going to the Farnborough Sports Club because they are very friendly, you'll se a a great game of football and you will meet some great people and may even make a few new friends and it is a good ground to say that you have been to and I would get down there whenever you can as they need the support. 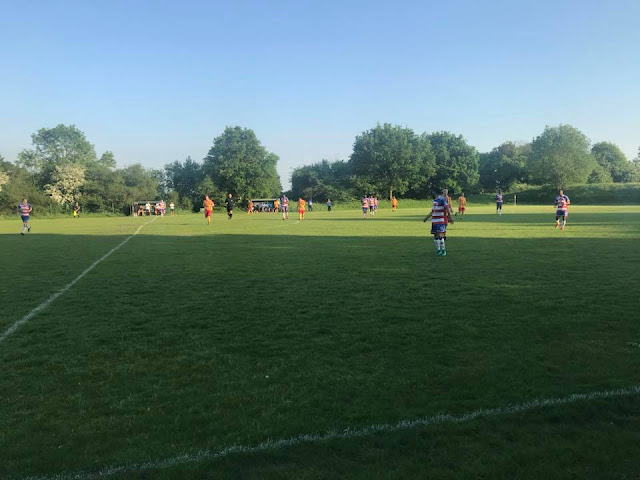 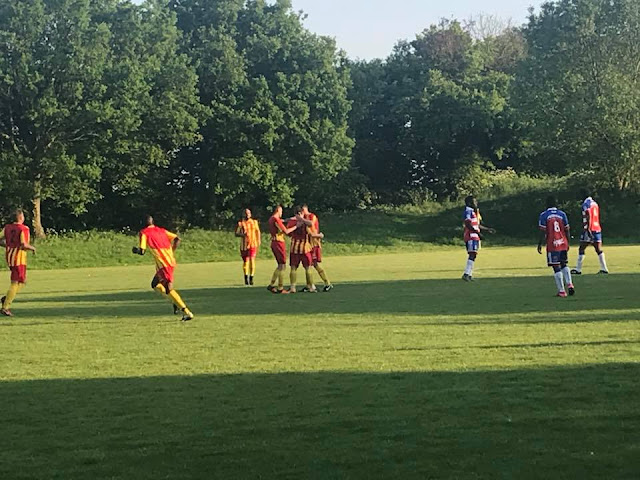 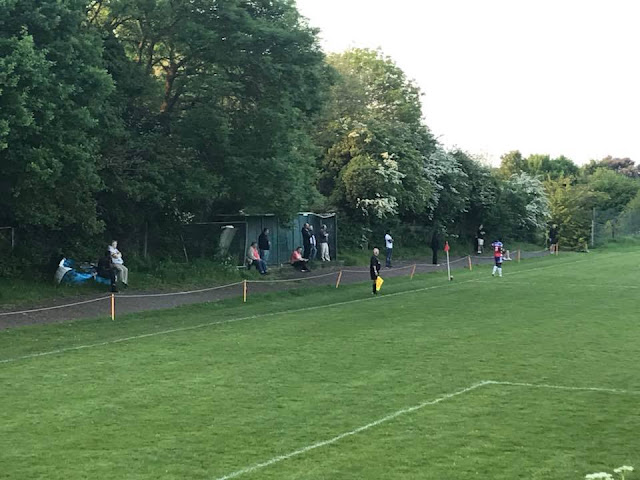 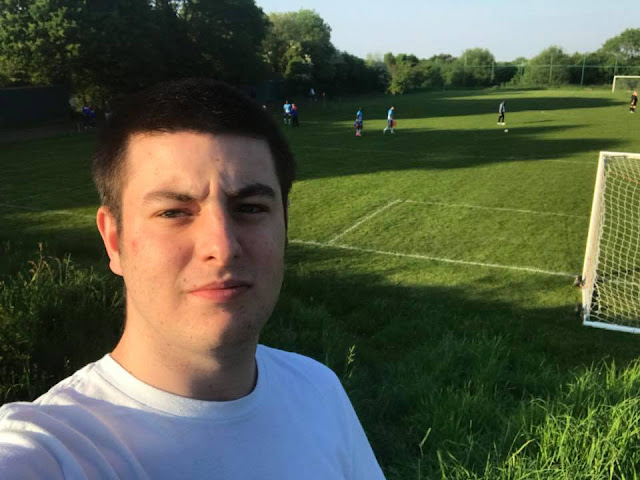 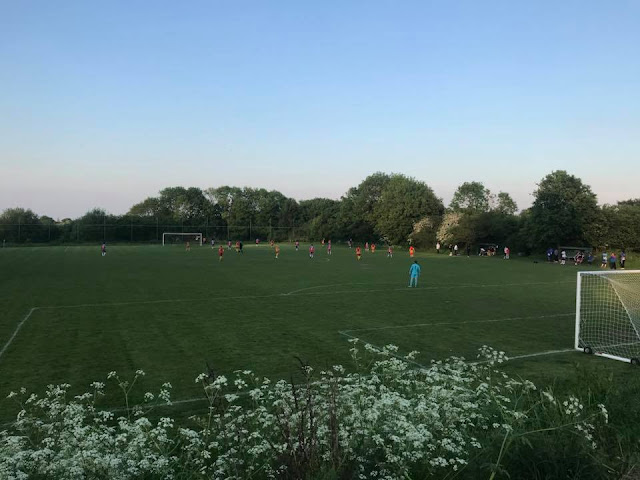 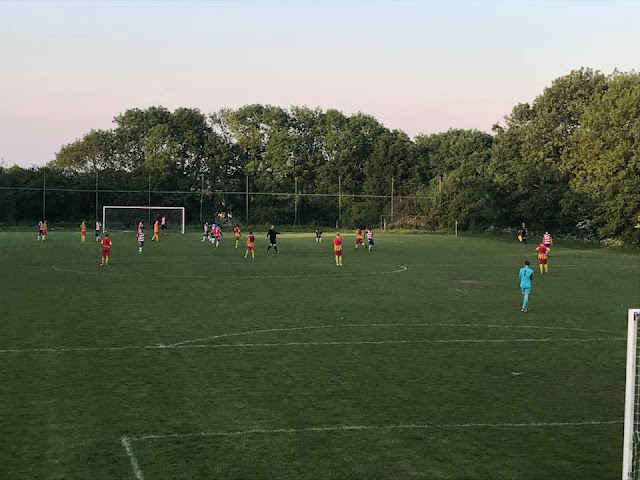