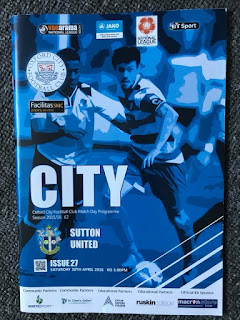 After a very long season but also a very achieving season, it was Sutton`s last game of the season which was away to Oxford City. Both teams did not really have anything to play for, Oxford had avoided relegation and were safe and Sutton had already been crowned champions. Both of the teams were really just playing for pride and reputation. On the other hand, Sutton realistically had to win because if they won today, it would mean that we have gone 26 games unbeaten in the league. This run of form had started in November after losing to Hayes and Yeading. I myself have only seen Sutton once this season in the league which was on the opening day against Maidstone. I have seen Sutton lose in the Surrey Senior Cup but the whole club does not really care about this competition any more because the league was our main focus.

Sutton were crowned champions in our last game which was when we beat Chelmsford City at home 2-0. We were all still excited that we had won the league. Some of my mates decided that they were going to wear fancy dress for a laugh for today and they did. I myself did not as I did not have any money to get a costume and I just could not be asked but I still joined in with the party spirit as we had been promoted to the top tier of non-league football. 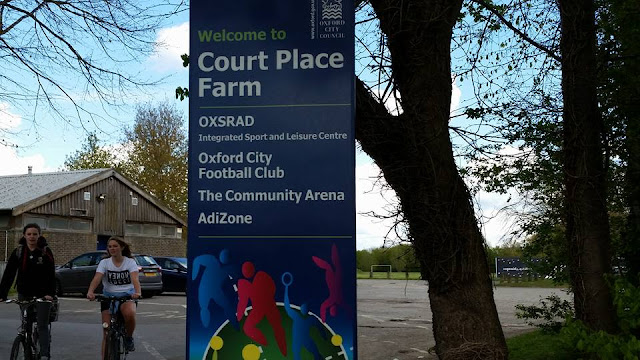 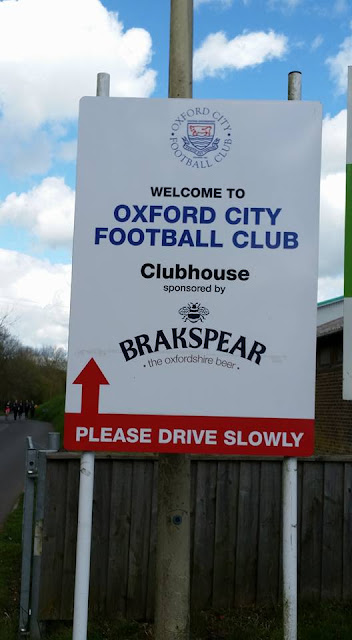 Oxford City were founded in 1882 and the club name has not been changed since the club was founded. The club`s nickname is `The City`. They play in blue and white hoops as their home strip similar to QPR. They currently play at Marsh Lane which is located in Marston on the outskirts of Oxford. The stadium has a capacity of 3,218 and there are 520 seats. Oxford has previously played in the Vanarama National League North but before this season started, the location boundaries for the spilt between the North and South division had been altered. This meant that Oxford City were now playing in the South not the North. Oxford City won the FA Amateur Cup in 1906. In 1988, the club were evicted from their White House Ground (old ground) as their landlords sold the land off for housing. This meant the club has to resign from the Isthmian League. When the club returned to the Isthmian League in 1993 they moved to their new ground which is the same ground they play at today. 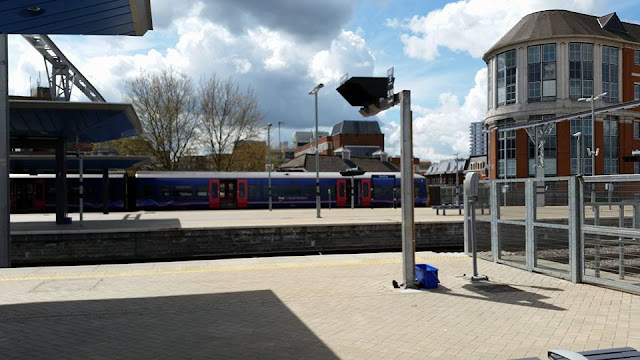 I woke up early in the morning at around 5:30am as I was really pumped for today`s game but at the same time, I was also very disappointed because it was the last game of the season. I was forgetting something, Sutton had just been promoted to the Vanarama National League so there was no reason to be disappointed, a new league, new opponents and a new challenge of playing in the top flight of non league football. I went downstairs and has some breakfast to wake myself up. I then had a quick shower and got dressed. 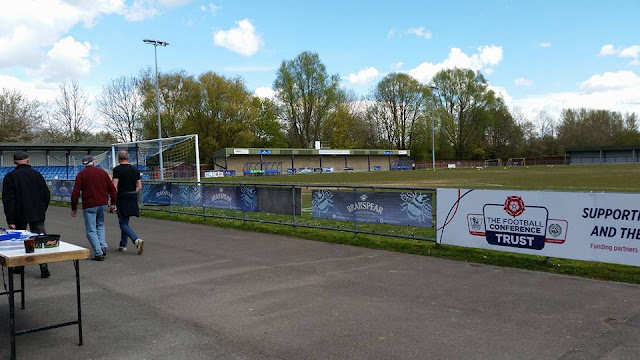 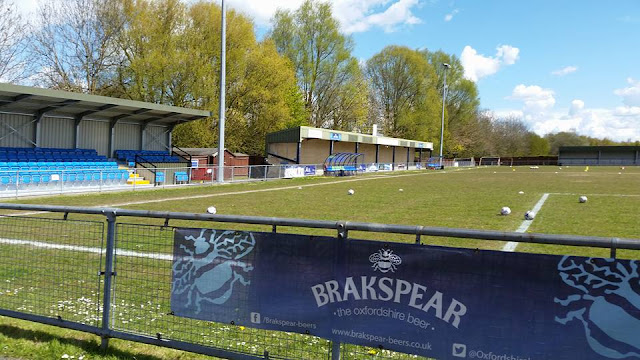 Our train to Clapham Junction finally arrived at 8:40am and our train left Wimbledon at 8:41am. We was only on the train for 7 minutes and we arrived at Clapham at 8:48am. Clapham and especially our platform was very busy because today the Navy v Army rugby match was taking place at Twickenham was nearly did not make it onto the train but we was very lucky. Before getting on the train, we noticed there was a Pumpkin shop and we got a bacon roll like they do at Salisbury as I could not resist and it tasted lovely. We then got on the train at 8:57am and we left Clapham at 8:58am. 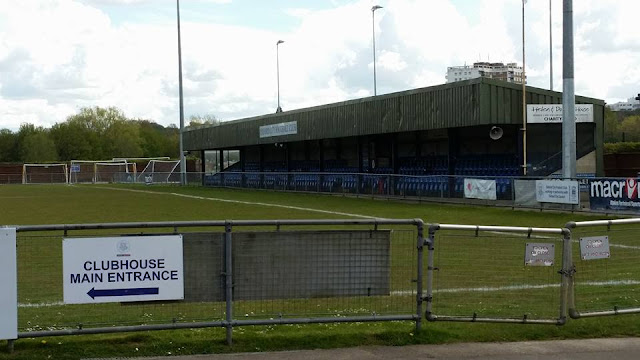 The train was very busy until we got to Twickenham where the train emptied out. We then had a smooth ride to Reading. We pulled in to Reading at 10:12am and we had 8 minutes until our train leaved but we quickly needed the toilet so we ran to the toilet to realise that we had 1 minute to catch our train and we ran to the platform and we just missed the train. This really annoyed me. We had to wait 25 minutes for the next train Oxford. This train arrived at 10:40am and we left Reading at 10:45am. 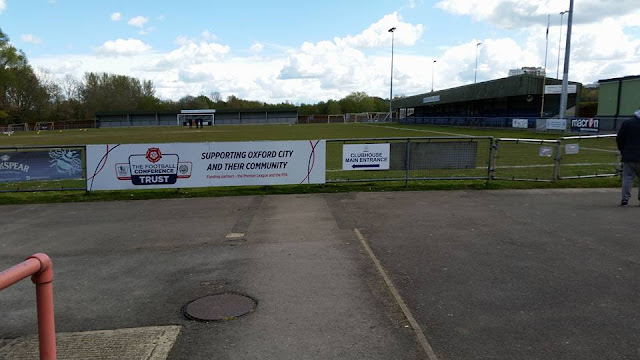 The train ride from Reading to Oxford is very nice. The scenery is very beautiful and the train is very quiet but busy at the same time. It only took 27 minutes to get to Oxford from Reading and we finally pulled into Oxford at 11:12am. We was going to have a look around Oxford but it was very busy so we decided to just get the bus. The bus that takes you to the ground is 14. The bus takes around 30 minutes to get to the stadium. 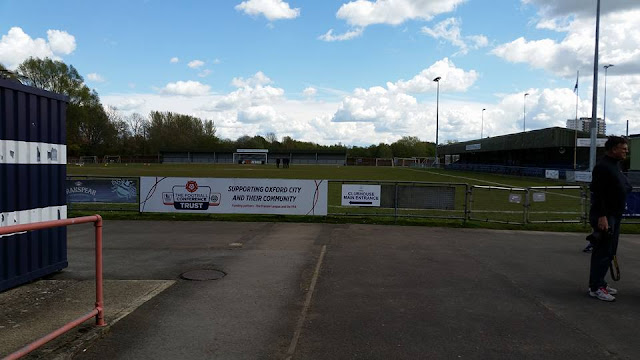 When we got to the ground at around 12pm we headed straight to the bar and had a coke. Then at around 1:30pm I headed out and walked around the ground and took some pictures. Court Place Farm is not the biggest of grounds that I have been to in non league. The main stand is situated on one side of the pitch. It is small in terms of height but long in terms of length. It is made from green metal and holds around 450 seats. Then opposite the main stand is a small covered terrace located in the middle of the pitch. Then next to this terrace is a small seated stand that has around 70 seats. Then behind one of the goals is a open section with cover and the bar. Then behind the other goal is a covered terrace. 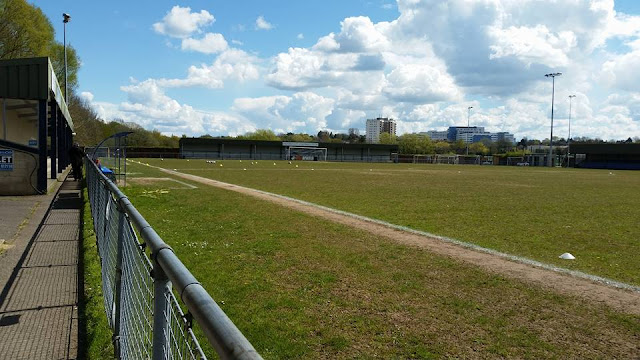 After taking some pictures of the ground, I went to the covered terrace behind the goal and put my flags up and s few Sutton fans joined us but when the teams came out, Sutton were kicking the other way which meant I had to take the flags down and go to the other end and put them back up. All the Sutton fans decided to stand in the seated stand alongside the pitch as the end we were kicing towards had no cover. 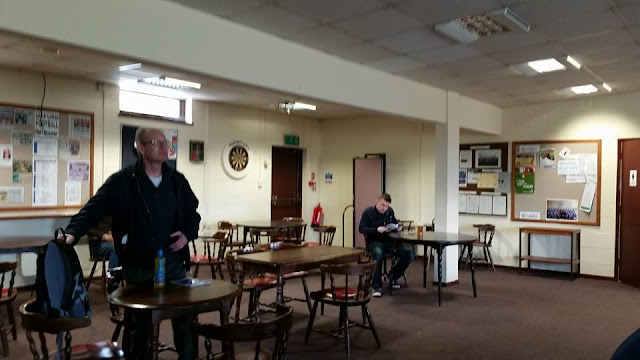 The first half looked pretty decent for Sutton as we were creating a lot of chances but Sutton finally took the lead when Tom Bolarinwa scored a very good goal and the Sutton fans went wild. All the Sutton fans then started singing champions songs and and songs like "if you're all going to Tranmere clap your hands" as we were looking forward to playing against big teams like Wrexham and Tranmere next season. 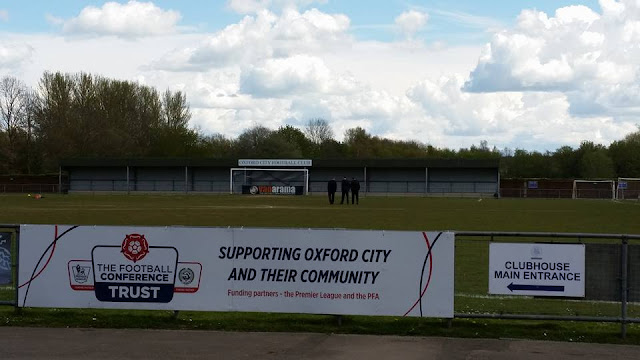 At half-time, we changed ends and went back to the covered terrace and I clipped my flags back up and by the time I had done that, the second half had just started and the atmosphere in the Sutton end was amazing, we were continously chanting throughout the second half and at one point, loyal Sutton fan Daniel Miller (aka Milldog) put a blow up trophy above his head and ran around the ground. Soonm after that, me and around 15 other Sutton fans did the conga around the ground as we were so happy that we had won the National League South. 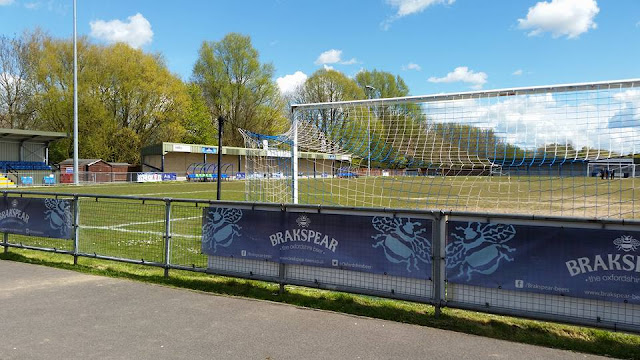 Sutton then had a golden chance to make it 2-0 via Dan Whishart but the shot went over the goal and the full time whistle blew and the season was over. Me and a few Sutton fans went on the pitch and I got some selfies with Dan Fitchett, manager Paul Doswell and goalkeeper Ross Worner and then I went back to the terrace and took my flags down and then walked back to the bus stop. 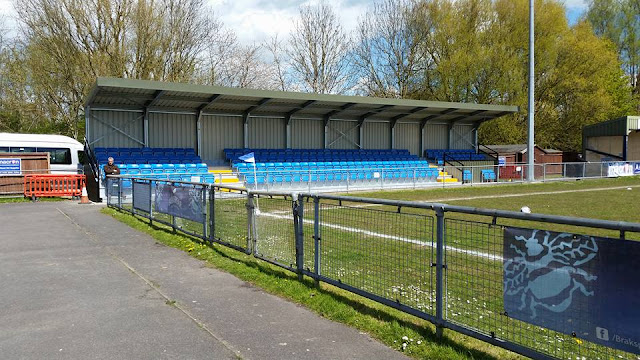 An Oxford City fan was on the bus and when we got off at the station, we wished him good luck for next season and he did the same. When then got back on the train feeling very happy but exhausted. We got back to Clapham Junction at around 7:30pm and we got home for 8:15am and that was the end of a brillaint season. 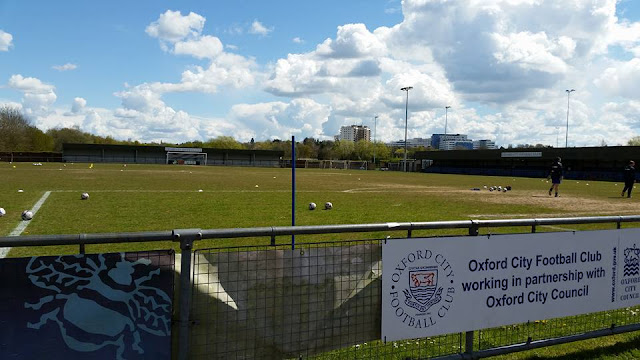 I really enjoyed my day at Oxford City F.C. and I would definetly reccommend groundhopping there as they have a decent stadium, very friendly fans and you will experience some decent football and if I had the oppertunity to go back to Oxford City FC, I defintely would go back. 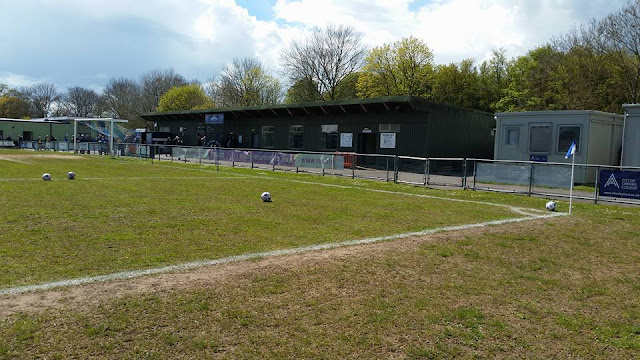 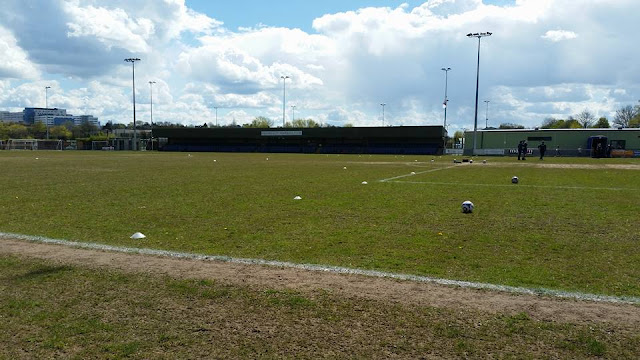 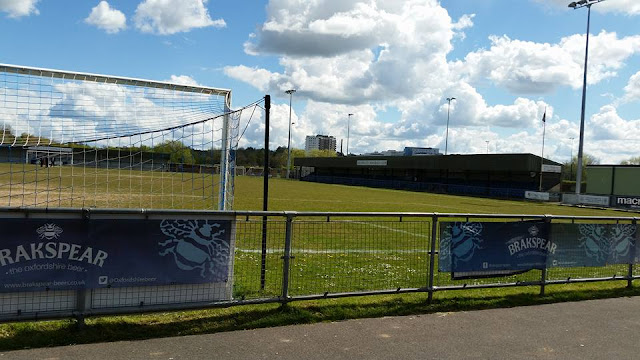 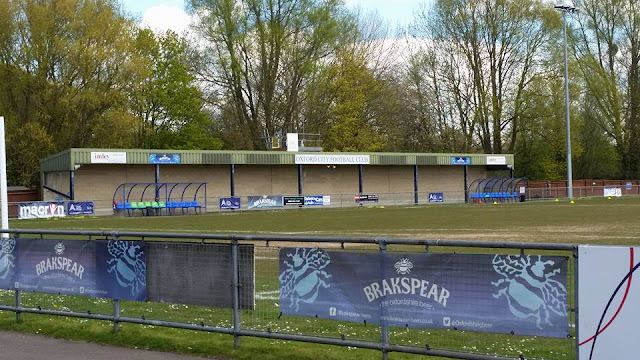 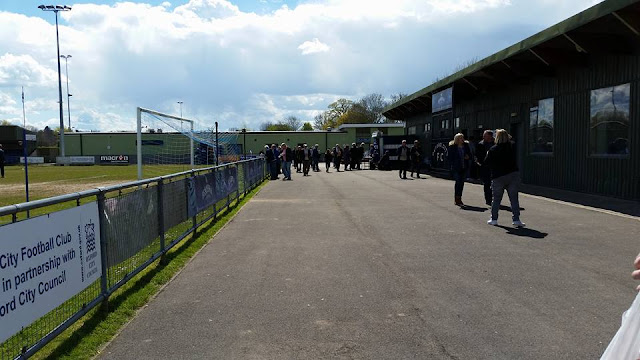 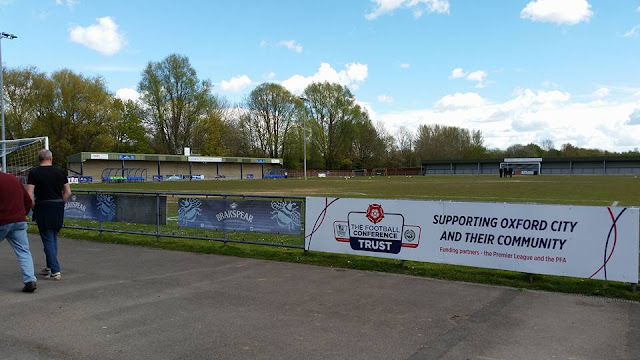